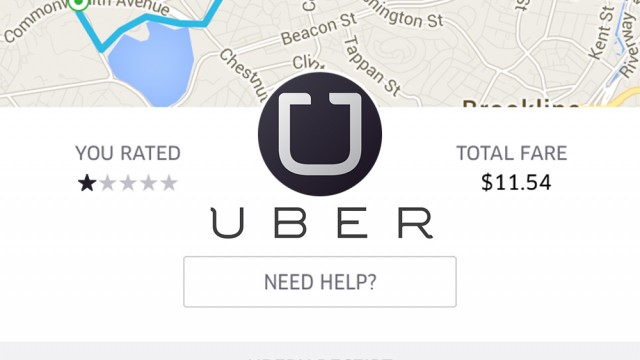 Anyone who is a regular Uber user knows the drill. Every time you finish a ride, you give your driver a rating from one to five stars. Most likely you don’t put much thought into those ratings—but for Uber, they’re crucial.

These ratings seem to be the only reliable way for the ride-sharing company to currently monitor customer feedback. There isn’t much the company is doing right now—besides controversial background checks—to track which drivers are better than others, and which should stay off of the road.

Having a say in who is behind the wheel of our ride is becoming increasingly important. We want to know that we are going to be safe when we get in an Uber.

Last week, a former Uber driver was found guilty of kidnapping and raping a female passenger in Boston. The driver reportedly lured the woman into his car and later climbed into the backseat, strangled the woman, and sexually assaulted her, according to The Boston Globe. He will spend at least 10 years in prison.

Back in December, I wrote a column about many of the controversies surrounding Uber—ranging from price gouging to Uber’s invasion of user privacy and safety concerns. As an experiment, I decided to delete my Uber app. I lasted about two months before I was standing alone on a street corner in the middle of Winter Storm Juno waiting for an Uber to save me from the latest wave of Snowmageddon 2015 (The T was shut down, of course.)

It’s simply too hard to go without Uber, especially as a college kid living in Boston. I’ve used the app eight times over the past month, and I was recently frightened to hear that my mom (who is technologically challenged, to say the least) occasionally uses the app to get around good ’ol Minnesota. Boston College also includes Uber on its website as an option for parents and students to get around Boston. The app is everywhere—and everyone is using it.

It’s clear that Uber isn’t leaving us anytime soon, but if the company wants to remain the main option for college students to get in and out of Boston, it needs a major reality check. The long list of the company’s problems that have been coined “Ubergate” continue to accumulate, and Uber needs to make passenger safety its top priority.

Many states across the country are demanding that ride-sharing companies like Uber and Lyft institute more thorough background checks. Last year, prosecutors in California argued that Uber has failed to properly inspect its drivers, some of whom were convicted sex offenders, kidnappers, and murderers.

Massachusetts lawmakers are currently making solid progress in reevaluating how Uber runs the road. Several proposals are being reviewed by the State House that would regulate the ride-sharing companies and focus on passenger safety. The bills call for extensive background checks for prospective drivers and require vehicles to display official signs.

One of the bills would require Uber applicants to submit fingerprint samples that would be validated by the State. Uber already has fingerprint policies in two cities: Houston, Texas and Columbus, Ohio. But the company has ferociously fought against fingerprint checks elsewhere, arguing that these scans would cause certain applicants to be flagged unfairly, and slow the process of hiring drivers. On the other hand, Taxi drivers and lobbyists would be eager to see statewide fingerprint policies put in place, including for their own drivers.

State Rep. Michael Moran is a co-sponsor of the bill that would require fingerprinting and explained that Uber is pushing hard to get more drivers on the road to serve high demand

“Anything that slows down their ability to get [an applicant] in a car and driving for Uber, they don’t want,” Moran told Boston.com.

Why wouldn’t Uber want the highest level of background checks on its drivers that represent everything the company stands for?

Sure the fingerprinting process would slow Uber from getting more drivers on the road, but I’m happy to wait longer for a ride as long as I know I can trust my driver. From a consumer’s point of view, safety is the top priority.

If Uber wants to continue to grow on college campuses across Boston, the company absolutely needs increased safety and background checks for its drivers. The nearly 250,000 students living in the city—especially women—will not get into the backseat of an Uber if they do not feel safe.

Now it’s up to Gov. Charlie Baker and the State to take action. We can’t have another instance of an Uber driver taking advantage of a passenger.