Daniel Craig has had two quintessential moments as James Bond.

In the opening action of Skyfall, Bond drives a bulldozer into a train. He rips an opening at the back of the train with a hook, tearing metal with harder metal. He leaps into the opening, stumbling for a moment, before catching his balance, straightening out his suit, and setting his goddamn cufflinks back in place in one seamless moment. If he’s going to beat the crap out of some guy, he’s going to look good doing it. It’s the most stereotypic James Bond moment Craig has been a part of, outside of making impeccable love to gorgeous women.

But there’s a moment in Casino Royale that is uncharacteristic of the traditional Bond. Craig had initially stoked the fanfare with his notorious, seductive strut out of the ocean in his form-fitting baby blue trunks. That’s who he is at the start, but this misrepresents who he becomes in Casino. Around the middle of the movie and in the middle of a high-stakes poker game, Bond and his partner/love interest Vesper Lynd run into some goons on the stairs. Bond kills them, brutally. He goes onto to finish the hand. Afterward, he checks on Vesper. Vesper is sitting in the shower, fully clothed. In a moment of actual humanity, Bond joins her. He just sits with her, and even turns the hot water on.

His range with the character—playing Bond both at the start and end of his road in Casino Royale and then Skyfall—has been impressive so far. Two of his four Bond films easily rank in the 24 film series top five (Casino Royale, Skyfall). We can’t blame him for the madness of Quantum of Solace. He’s what made it watchable amid its mess of a plot.

Craig made Bond human. He bleeds and breaks, falls in and out of love. And Craig’s Bond has had a morbid sense of humor about it all. It’s not as playful or charming as Sean Connery. He jokes in Casino Royale that M won’t have to deal with him for very long. 007s have a short lifespan. There’s the playful bits with Q (the boyish MI6 weapons master).

In Skyfall, Bond returns from the “dead” and must prove he’s fit for duty. And as we watch Craig dutifully, humorously will Bond’s body and mind through the conditioning tests, we see how much of a feat it really is for him to get back to usual stamina. He has been literally running through walls, shot off a train, and he had to watch the only woman he’s ever loved commit suicide. Behind those eyes as blue as the clearest day, there’s resounding humanity for a man with a licence to kill.

Pierce Brosnan’s last Bond film, Die Another Day, came out in 2002. So did Bourne Identity. And comparing the complexities of the two, the infamous British super spy, and the amnesiac  American agent was alike to comparing high school drama to geopolitics. Die Another Day was the Batman & Robin of the bond series: a work of pure, misguided campiness. With Matt Damon’s Jason Bourne and Tom Cruise’s Ethan Hunt running around saving the world—one through incredible efficiency, the other sheer force of Crusian will—Brosnan’s Bond was hopelessly outmatched.

And four years later, Daniel Craig entered the scene in the gambling caper Casino Royale (2006). And while he wasn’t as slick and lighthearted as Connery or the ’70s and ’80s Bond, Roger Moore, he felt more honest. He wasn’t as recklessly violent as Brosnan, who racked up higher kill-counts than anyone. There’s some recency biases with the Craig argument, sure, but no Bond has been as collectively awesome and psychologically messed up as Craig’s. That combination, though, has made Bond a hero we can oddly empathize with and root for, more so than with Connery and Moore. Daniel Craig saved James Bond.

So what does this all mean for Spectre and the future of Bond? Well, it means that James Bond fans should treasure Spectre. It may be the last one they get with the best Bond yet. 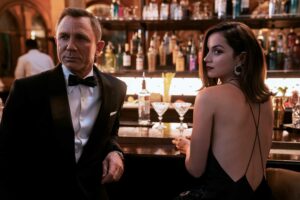