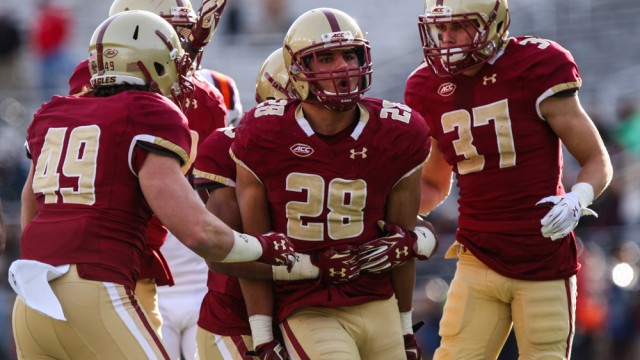 BC Playing For Pride In Final Home Game Against NC State

This isn’t groundbreaking analysis. Anyone who has undertaken the frustrating task of watching Boston College football in 2015 knows this all too well. On Saturday, the Eagles will close out their home schedule against the Wolfpack of North Carolina State. Expect some great defense, and—you guessed it—some not-so-great offense.

The exasperating struggle known as the BC offense isn’t likely to break out this weekend. In fairness, the inexperienced group has faced some of the more stingy defenses in the nation, all the while being extremely depleted by injuries. Unfortunately for BC, the same issues of the past couple months remain, and the team once again faces the prospect of game-planning for a very strong defense. BC head coach Steve Addazio acknowledged as much.

“They’re 10th in total defense. They’re 27th against the run and 13th against the pass,” Addazio said. “Middle linebacker Jerod Fernandez, defensive end Mike Rose, and defensive end Bradley Chubb are all very talented guys. They’re as strong an interior defense as we’ve faced. They’re big, physical, and get a lot of push.”

That’s not a great recipe for a team dedicated to running the football behind an inexperienced offensive line. While some have questioned Addazio’s decision-making this season, the same cannot be asked about his trademark competitive spirit. The wave of enthusiasm brought on by Addazio that helped bring BC football back to relevance has yet to waver throughout a thoroughly trying season, and he certainly won’t start now. Just because the Wolfpack are a top defense doesn’t mean that Addazio won’t harbor a whole lot of optimism heading into the team’s battle with N.C. State.

Much of his optimism this week stems from an unlikely source—quarterback John Fadule. Not often does a team rely upon a walk-on freshman at the game’s most important position, let alone trumpet him as team’s most viable option. Call it exciting, call it depressing, call it whatever you’d like. Addazio, however, will stick with excitement.

“John Fadule will be getting his share of the reps with the ones,” Addazio said. “That’s going to happen. I’m not into just straight anointing people given how quickly this has come about. But certainly his performance is one that we’re excited about. What I think he brought into that game was real toughness, real energy, and he moved the team. That’s really important.”

On Saturday, it appears that Fadule will once again be given the opportunity to start after relieving Troy Flutie last week against Virginia Tech. Despite only a 10-point output by the Fadule-led offense, there’s a feeling that he may be a jolt the offense has been missing. While a 10-point performance being referred to as a spark might be somewhat disheartening to hear, his performance last weekend against Virginia Tech did produce some positives (however relative). The freshman took shots downfield and showed toughness when tucking and running with the ball. His will to win was certainly never in question.

Addazio isn’t quite ready to anoint Fadule the savior of BC football yet, though.

“I also know that one game doesn’t make a career or make a season—I’ve been around long enough,” Addazio said. “So let’s just let it go a little bit. He’s still a young guy and he’s still a freshman. He hasn’t played a lot of football. I don’t care who you are, there’s going to be a rollercoaster ride. We’ve been on it several times this year.”

While Fadule has been the most polarizing topic this week leading up to N.C. State, there are plenty of other storylines to keep track of this weekend.

Most importantly, Saturday is senior day at Alumni Stadium. Despite a disappointing season so far, Addazio can’t say enough about this team’s senior class.

“They’ve done a great job with the young guys trying to set a culture—I told them that after the game,” Addazio said. “For a lot of reasons, we ended up being a real young football team this year. We knew we were going to be pretty young on one side of the ball but it’s just evolved with injuries and everything. These guys are going to be a part of really setting a great foundation as we move forward here.”

Seniors Justin Simmons, Stephen Daniels, Mehdi Abdesmad, and Connor Wujciak have been dominant presences on a great BC defense. They have played at a level matched by very few in the nation, and deserve recognition this weekend. It’s a shame that their impressive performance this year has been overlooked due to a struggling offense. Unfortunately for them, this weekend’s game shapes up very similarly to most of the other ACC matchups BC has faced this season. All have resulted in losses.

There is no question that BC’s talented seniors will give it all they have on Saturday, in pursuit of one last win at Alumni Stadium. Whether the team can put up enough points to pull off a win is far less certain. At this point, that’s just the frustrating story of BC football in 2015.