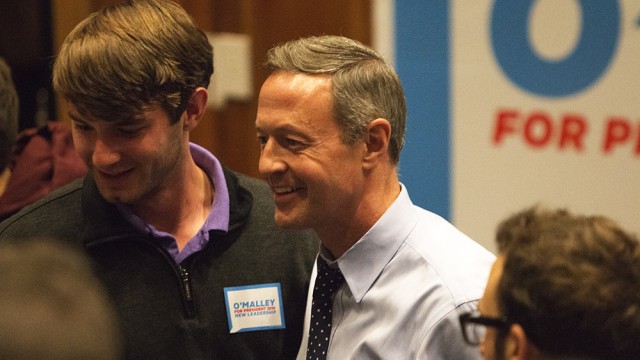 During BC Campaign Stop, Martin O’Malley Fights For Name Recognition

Students were sprawled across the room, the Dropkick Murphy’s “I’m Shipping up to Boston” blared over the speakers, and applause erupted when Democratic presidential candidate Martin O’Malley finally stepped into McGuinn 121.

The former governor of Maryland and mayor of Baltimore spoke to a group of over 250 Boston College students Wednesday night about his current campaign for president of the United States. He spoke about his goals for the country and his campaign slogan “New Leadership,” before taking questions from students.

“This country is looking for a new leader,” O’Malley said. “And while there may be a person better to lead us forward, this year they are not running, and I am.”

“I’m going to do it in the old fashion way, by going to town to town, from living room to living room, getting up on the chair, giving the talk, answering questions, searching for answer.”

“BC is seen as politically apathetic about everything,” Shelepak said. “Just having a candidate on campus to open that dialogue, you saw how engaged students can be. Especially for a candidate like O’Malley, that is kind of unknown to a lot of people, getting his face out there and seeing the ideas he stands for benefitted the campaign and also BC to become more politically engaged.”

O’Malley, who has 15 years of political experience, focused on domestic legislation during his tenure as governor. Within his candidacy, he passed the DREAM Act, created comprehensive gun control legislation, raised the minimum wage, legalized gay marriage, and eliminated the death penalty in the state of Maryland. O’Malley was also elected the mayor of Baltimore during some of the city’s most violent years. While the city is still not near perfect, O’Malley claims that he increased safety within the capital and brought down the daily death toll.

O’Malley spoke to students about his three presidential goals. He wants to restore wage and labor policies, create investments to stimulate the economy, and square the country’s shoulders to the issues that affect our generation.

“Together, you and I have tough work ahead of us,” O’Malley said. “And that is to rebuild the truth of the American Dream that we share. Right now, in our nation, we have to acknowledge that we have come a long way. But we still have important work ahead of us.”

O’Malley hopes to raise the national minimum wage to $15, establish mandatory overtime pay, and eliminate the wage gap between men and women. He also spoke about creating comprehensive immigration reform to provide a living wage for those who seek citizenship in the United States.

The former governor said he would invest in infrastructure, public transportation, and make debt-free college degrees a reality for students within the next five years. O’Malley drew from personal experience, citing his own children’s mounting college debts. He said he understands how unaffordable higher education can be for American families, and he hopes to create legislation to change that.

O’Malley is a firm believer in facing the issues that are affecting the country today, including finding solutions to climate change, ending hunger within the U.S., and making national service a universal option.

O’Malley used humor throughout his speech to appeal to the student demographic, throwing out jokes about Bruce Springsteen, Donald Trump, and the other Democratic candidates.

O’Malley then took questions from students about issues ranging from his plan to address the violence in Syria to his opinion on The Trans-Pacific Partnership. He answered questions about his policies to correct gun violence, his plan to take in Syrian refugees, and how he plans to fix rising pharmaceutical and drug prices.

Throughout his speech, the governor was not shy in praising President Obama for his efforts to get the country back on its feet.

He hopes to further correct the bad decisions that politicians have made over the last 30 years and solve the issues that have risen from trickle-down economics.

O’Malley attended Gonzaga College High School, a Jesuit, all-boys high school in Washington, D.C., and says that he is still fond of Jesuit ideals. He brought up Rev. David Hollenbach, S.J., a BC professor, who wrote a book on common good within the U.S. O’Malley said that Hollenbach’s work has influenced him as a politician and suggested that students enroll in his class.

While O’Malley realizes that he only has five percent national name recognition and is in third place for the Democratic primaries, he has a plan to gain ground on former secretary of state Hillary Clinton and senator Bernie Sanders.

“I’m going to do it in the old fashion way, by going to town to town, from living room to living room, getting up on the chair, giving the talk, answering questions, searching for answers,” O’Malley said. “That’s what I believe people will respond to. I have the huge competitive advantage of being one of only three people on that debate stage.”

“I was just up in New Hampshire,” O’Malley said. “And up there, every individual person still matters. And they are looking for a new leader.”