Home » With Variety Of Dining Experiences, Coppersmith Is A Foodie Playground In Southie 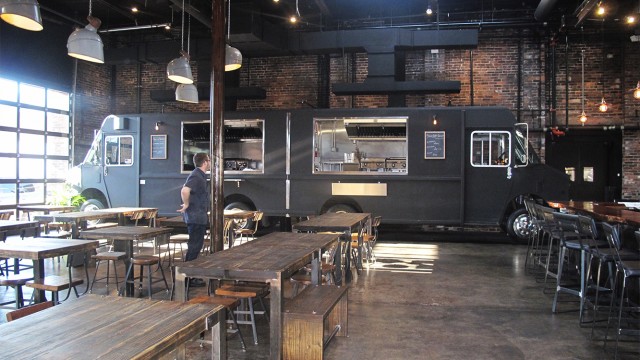 With Variety Of Dining Experiences, Coppersmith Is A Foodie Playground In Southie

Over a century ago, if you visited the corner of 40 W. 3rd St. in Southie, you’d hear the hustle and bustle of an old copper mill. Stop by today and in its place you’ll find Coppersmith—a posh, new neighborhood restaurant with the steampunk vibe of its predecessor. With history as both an auto garage and warehouse space, subtle elements of the building’s history still remain—two large garage doors in front of the property and a copper boiler on the second floor add a distinct rustic charm to Coppersmith. But the rest of the space is far from outdated.

As a massive 15,000-square foot space with 25-foot high ceilings, Coppersmith is a self-proclaimed third space and foodie playground. The restaurant is dynamic, boasting a variety of different spaces—each offering guests a savory dining experience.

The 88-seat communal dining area, distinguished by a 100-foot, wrap-around bar and two fully functioning food trucks, extends to an outdoor patio area. With 75 seats and multiple flat screen TVs, the bar serves up playful and tasty bar snacks, like BBQ popcorn and chili-lime pork rinds, alongside one of its diverse taps or cocktails. Go upstairs and you will find a trendy rooftop deck with a view over South Boston. An Airstream trailer, which will be converted into a raw bar in the Spring, plans to serve visitors fresh local oysters and shrimp cocktails. The restaurant also plans to open a cafe in early December, stocked with homemade pastries, grab-and-go sandwiches for lunch, salads, and sides.

Executive chef Chris Henry, previously with the Barbara Lynch Gruppo, is a classically trained chef offering guests the same products and techniques of any upscale restaurant, minus the high cost and stuffiness.

“The owners really wanted that fine dining ethos, but applied to a neighborhood restaurant,” he said. “What you’re getting on the plate is recognizable and familiar. Nothing too avant garde—no sculptures.”

With its array of long, connected wooden tables, Coppersmith was built with the communal sharing theme in mind. Ideally, Henry envisions a party ordering four or five things for the table so everyone gets to try a bit of everything.

Chef Henry also explained how the menu is meant to be a little bit playful—reflective of Coppersmith’s food trucks. Coppersmith is serving up global influences, like classic street food from the food trucks with a slightly more refined flair on the regular menu. While one of the truck’s menus remains consistent for three to four weeks at a time, the other is changing daily, depending on chef’s whim or the local market. With so many different outlets to get creative with local ingredients, Henry loves having the freedom to grab some organic ribeye steaks from local vendors without necessarily needing a plan for them right away. He’ll find a way to work them into the menu.

“We’re not an Italian, French, or Mexican restaurant, but you’ll certainly see influences from all of those places on the menu,” Henry explained.

And with one glance at the menu, diversity is just what you get. A guest can order anything from fried green tomatoes with pickled black-eyed peas and tomato aioli to paella with crab, clams, mussels, and saffron. Sticky bun bread pudding with bacon, bourbon caramel, and pecan brittle is offered as a tantalizing dessert option along with ginger-molasses panna cotta with pumpkin bread pepita crumble and ginger chocolate sauce.

Currently, the restaurant is open for brunch and dinner service, but aims to be a fully functional, open from early morning to late night. It’s a place where anyone in the neighborhood can go—from the Seaport to Fort Point—to grab a cup of coffee in the morning, lunch in the afternoon, dinner at night, or late night drinks.

“It all ties back into the neighborhood, keeping it local, and feeding the local economy,” Henry said.

Coppersmith is an embodiment of American food at its core, in the sense that America is a melting pot of everything and anything. It’s what allows a menu that offers Italian creme doughnuts alongside a Greek falafel burger with tzatziki to make sense. Whether you visit Coppersmith to grab a beer and watch the big game or gather for a family dinner, one thing is certain—the fried pickles will be cooked to perfection.