For the final Agape Latte talk of this semester C21 Associate Director and “genius behind Agape Latte,” Karen Kiefer, spoke at the Christmas extravaganza in a packed Hillside Cafe last night, Tuesday, Dec. 1. Following music, coffee, and Christmas treats, Kiefer told the story of how baking bread gave her a way to serve God.

Kiefer began by noting her time at Boston College. She grew up at BC, first setting foot on campus at age 2, attending school here, working at the University, and now having two daughters enrolled. Kiefer said that over these years, one of the things BC did for her is teach her perspective.

Growing up in a large Irish-Catholic family, Kiefer said she was taught that charity begins at home and, if she had extra time, to go to the church. When she met with Jesuits at BC, however, her paradigm shifted.

After giving birth to her first child and feeling filled with gratitude, Kiefer’s mantra to God was, “Help me help you,” she said. This continued until the birth of her second child, when she began to feel frustrated and unheard. She said that after talking with a friend of hers who is a Jesuit she knew that by living and raising children she was doing right by God, but still felt as though she wasn’t doing enough. Finally, when she had a third child and a heightened level of frustration, she spoke again with the Jesuit who told her she needed patience. She said that he told her God would answer her and she just needed to figure out how he would do so.

“You don’t always have to see when you do something good for someone. You just have to know you did it, and then you can hear the little jingle in your heart roast.”

Kiefer then told the story of an afternoon she spent with her three children trying to bake her mother’s Irish bread. She explained that her mother baked the bread every day when Kiefer was growing up. The bread would sit on her table and her and she would run home from school to try to get the first slice of it.

“The bread became a staple,” Kiefer said. “But it also became, for my mom, a way to celebrate the goodness of the day.”

The bread celebrated happiness, sadness, weddings, and funerals. She explained that the bread meant a lot to her mother and it followed Kiefer throughout her childhood and her life.

“It was alive in its spirit,” Kiefer said.

Kiefer then said that when she and her children went to make the bread, they would make a lot, wrap it up, and then tie it with a note sending good wishes and sign off, “The Kiefer Baking Elves.” They would then leave the bread on neighbor’s doorsteps telling them to enjoy it and call if they wanted the recipe. She said everyone loved it.

Later, she found a baking contest asking how the contestants celebrate the holidays with their baked goods. After signing up, Kiefer won the contest, which awarded her in many baking supplies and resulted in more baking.

In response to her husband’s suggestion, Kiefer and her children began baking for veterans in a shelter in Boston. They baked 300 loaves of bread, decorated them, and her husband took them over to the veterans.

One night, however, one of her daughters began to cry because she never saw the veterans receive the breads.

“You don’t always have to see when you do something good for someone,” Kiefer said she told her daughter. “You just have to know you did it, and then you can hear the little jingle in your heart roast.”

She said that that was a “God-wink” moment for her, a moment in which the experience felt like it was sent from God. She said it was the moment bread became “their thing.” Throughout their future moves, they kept making the bread and kept sharing it. As a result, she connected with another friend who shared her passion and they started a bread drive with the idea that everyone is connected to a bread either through culture, religion, or the like. They were going to challenge people to bake bread.

Kiefer explained that they got a school involved and were ready to go. Then, terrorists attacked the country Sept. 11 2001.

“I’m telling you, that bread called so many families in our community back into the kitchen,” Kiefer said. “It was an opportunity to have a conversation with their kids and say, ‘Don’t be scared and don’t ever be afraid to reach out and help someone; we bake bread for us, we bake bread for others.’”

The “Spread the Bread Drive” was held about a month after Sept. 11 where participants were asked to bake their favorite bread and to wrap it with a note of hope, inspiration, or love.

She said that soon enough there was a Girl Scout patch. Next, came bread groups throughout the nation, and then it spread internationally.

Kiefer noted the numerous accounts where she saw the bread impact others, through individuals directly receiving the breads and the ways she saw it indirectly transform her children’s character, ultimately leading to her book publication, The Misfit Sock.

“You tell me, can one loaf of bread make a difference? Can one prayer to God help me help you? Help us help someone else?” Kiefer said. “You bet.” 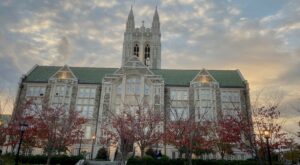