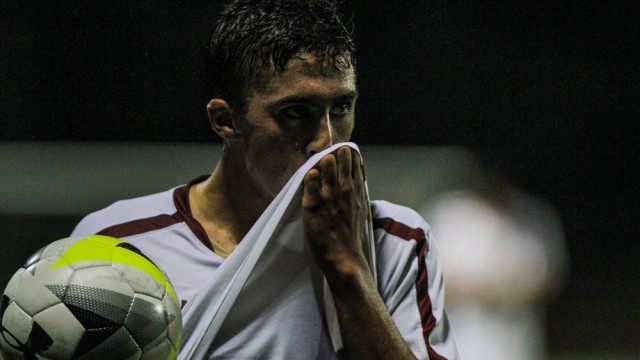 The dream run is over.

After an opening round win over the University of Vermont and two upsets over No. 14 University of South Florida and No. 3 Georgetown University brought Boston College men’s soccer (11-8-2, 4-4 Atlantic Coast) to the Elite Eight, No. 6 Syracuse University (16-5-3, 3-4-1) ended the Eagles’ special season.

BC was the last unseeded team left in the tournament when it fell 1-0 to the Orange in Syracuse, N.Y. on Saturday afternoon.

The rematch featured two ACC opponents on incredible hot streaks. The Cinderella-like Eagles stayed hot in the NCAA Tournament to reach this stage for the first time since 2002, while the Orange were riding an unlikely six-game unbeaten run that started in the ACC Tournament. The last game that Syracuse lost was the final regular season game at BC, a 2-1 tilt in Newton.

Syracuse controlled the game from the very beginning, and never let the Eagles into a clear rhythm.

In the first 15 minutes, Syracuse controlled midfield play and put the Eagles under pressure, forcing a few giveaways from an otherwise solid BC defense. The Orange did not have many clear-cut chances, save for one low shot that forced BC goalie Alex Kapp into a diving save, and they suffocated the Eagles with possession.

With Zeiko Lewis and Henry Balf unable to get much started in the middle of the field, the Eagles’ only option in the first half was Ike Normesinu, who continually received the ball out wide with space to run on the left side.

Midway through the half, BC won a free kick in the offensive third for its only true chance of the half, but Lewis squandered any opportunity of giving the Eagles a lead with a poorly taken in-swinging ball.

The second half started as the first ended, with Syracuse dominating the play and keeping the ball in its offensive end.

With Lewis taken out of the game in the middle, Trevor Davock unable to get anything going on the right side, and Enstrom not getting the ball from those two teammates, the Eagles could not generate much offense.

The Eagles could only hope for one moment of magic to break through and had to rely on someone other than their stars to provide the game-defining moment.

The only chance that BC had that came close to making that happen came in the 71st minute. Off a corner from Balf, Abe Bibas launched a side volley that was headed for the corner of the net, but the shot couldn’t find its way through traffic and was blocked out of bounds.

An outstanding performance by a big and aggressive backline of Syracuse prevented the Eagles from registering a shot on goal in the entire game, and ’Cuse goalie Hendrik Hilpert was rarely called into the action.

In the other net, Kapp was the busiest player on the pitch and kept the game at a scoreless draw.

Constantly under fire from the ’Cuse attack, which mostly came from crosses, Kapp commanded his six-yard box, reading balls well and coming off his line quickly to collect them. The only close call was a 50-50 ball in the air that found the back of the net, but was called back for a foul on Kapp.

In a two minute stretch from the 64rd to 66th minute, Kapp stood on his head for two incredible saves to keep Syracuse off the scoresheet as the Orange fired off five consecutive corners.

The initial corner to start the sequence came after Kapp made an acrobatic leap to tip the ball over the crossbar. On the ensuing corner, Kapp had to dive to the near post to keep a dangerous low ball from sneaking in.

It wasn’t until the 13th corner of the game, in the 79th minute, that Syracuse finally got one past Kapp.

Liam Callanan sent the ball over Kapp’s head to find Ben Polk unmarked at the back post, and the forward converted the open header for his 12th of the season.

The Eagles pushed forward in a last-ditch effort to equalize, moving to three in the back and moving Toby Ampadu up to the midfield, but the Orange still controlled the ball enough to dribble to the corner and watch the seconds tick off the clock to seal the victory.

While the Eagles had Syracuse’s number the first time around, the Orange were clearly too much for this BC team.

Making it all the way to the quarterfinals, the Eagles had a remarkable turnaround in just one year. They won six more games than they did last year, when they finished with a record of 5-8-3, including just one win in the ACC. Even more remarkable is the fact that the Eagles accomplished this feat with a team that consisted of eight freshmen that contributed significantly at some point this year.

Throughout the year, the Eagles showcased a potent attack led by Lewis, Enstrom, and Davock that could score in brilliant ways. The young talent brought BC on an extraordinary run that brought the team back in the national spotlight.

In the end, though, the Eagles ran into a strong Syracuse team that was on a hotter streak than they were, and the dream run was halted just short of a first-ever trip to the College Cup.