From the outset, there was a feeling that Boston College men’s hockey might be in trouble.

Two hours prior to Thursday’s game against the University of Notre Dame, BC Athletics announced that forwards Chris Calnan (shoulder), Miles Wood (norovirus), and Alex Tuch (concussion) couldn’t dress. Normally, losing some of your best offensive playmakers could cause a team to struggle, especially against a bitter rival with an impressive goaltender like Cal Petersen. The Eagles aren’t particularly deep defensively, and stretching the forwards even thinner doesn’t help.

That’s not all for the Eagles. Calnan, Wood, and Tuch are above 6-foot-1, and each has a reputation for physical play. And when a team goes up against head coach Jeff Jackson’s traditionally hard-nosed Fighting Irish, it’ll need every bit of physicality it can get.

BC showed its sluggishness early on, having a hard time getting consistent offensive chances. A makeshift line of Zach Sanford, Austin Cangelosi, and Adam Gilmour put the pressure on Petersen, but only in bunches. When the Eagles lost control of the puck, Notre Dame refused to let up, constantly challenging BC goaltender Thatcher Demko, outshooting BC 13-7. Irish defenseman Bobby Nardella was persistent with his attack in the first period, launching five shots on the Eagles’ goalie. One of them took a hard rebound off Demko’s pads, rebounding right to freshman forward Jack Jenkins for his first career goal.

The high-flying Eagles answered back immediately. Gilmour created some offensive separation after a quick feed from Cangelosi, splitting a couple of defenders for the equalizer in the low slot from between the circles.

In the second, BC showed some of that lethargy on the offensive end. The Eagles received several golden opportunities to take the lead, with three power plays. Ryan Fitzgerald and Colin White each made key turnovers during a man advantage, killing any chance BC had in that frame.

But the most notable opportunity for York’s crew came shortly after White left the penalty box early in the second, when he dashed toward the net but got hooked by Notre Dame’s Luke Ripley. White earned a penalty shot—his second of the season—but fired it right at Petersen’s pads for the easy save.

In the third, York’s temporary offensive plan was put in full gear. The five-time national champion head coach, still sitting on career win No. 997, decided to use two set lines—Sanford, Cangelosi, and Gilmour; and Fitzgerald, White, and Matthew Gaudreau—while fluctuating his five remaining available forwards on a 30-to-45 second cycle. York even shifted out players on an individual basis if he saw that they were tiring, and forced Teddy Doherty back into the swing forward-defender position that he played much of last season.

York and Doherty both lauded how the team gritted through the lack of depth for much of the game, specifically highlighting three lesser-used forwards: Travis Jeke, Peter McMullen, and J.D. Dudek. “We had to really ask a lot for the kids to step in and play more minutes,” York said.

That strategy of quick bursts of rest worked effectively, as Cangelosi scored two goals at 3:48 and 7:05 in the period to give the Eagles a seemingly insurmountable lead, considering the way Demko had been playing. The first came off a cross-ice pass by Doherty, hitting Cangelosi, who was waiting at the bottom right corner of Petersen’s net for the easy tip-in. Doherty then shot a billiard ball at the boards behind Petersen, which Cangelosi reeled in perfectly for his second. Both goals came with secondary assists from Sanford, who had three on the night. With those goals, the Eagles are now the country’s highest scoring team in the third period, with 29, surpassing Boston University.

Yet the lack of depth and fatigue creeped up. The Irish fought back with three in a row. Jordan Gross tipped in a deep shot from Anders Bjork at 8:33 to cut the lead to 3-2, before two consecutive faceoff goals ended the Eagles’ chances. Andrew Oglevie notched the first one, off a beautiful faceoff winner by Jake Evans. Dennis Gilbert dropped the dagger, scoring from the blue line with a mere 22 seconds left. It wasn’t that the Eagles lost that upset York, but rather how those two goals were scored.

“You don’t like to give up faceoff goals, and we gave up two of them tonight,” York said.

Now at the halfway point of the season, the Eagles are looking forward to getting healthy and recovering. York and Doherty both believe that the midseason break is coming at the perfect time for their team—BC’s next game won’t be until Dec. 28 in the Florida Hockey Classic against The Ohio State University. But given that Demko faced 39 shots, BC’s lack of depth in the defensive zone has clearly proven to be an issue that time off might not solve.

Doherty, the team captain, recognized this and the team’s overall fatigue and refused to give excuses for blowing a lead.

“We played 50 really good minutes, really smart minutes,” he said. “But we broke down there at the end.”

BC’s home winning streak wasn’t going to last forever. And comebacks can’t always lead to wins—just ask the hockey teams at Michigan State University, the University of Denver, and Northeastern University what they think about BC’s late-game heroics. But Thursday’s loss to Notre Dame revealed the holes this team has, denying BC a chance at a signature Hockey East win before having to face defending champion Providence College and BU two times apiece in January. With three weeks until their next game, the Eagles will have a chance to rest up and reflect. But when it comes back, the team must be ready to figure out which games were the flukes: the late-game wins, or the last-second collapses? 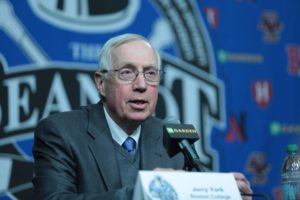 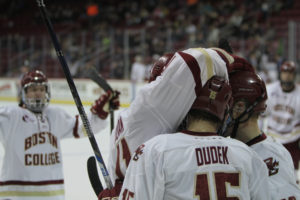