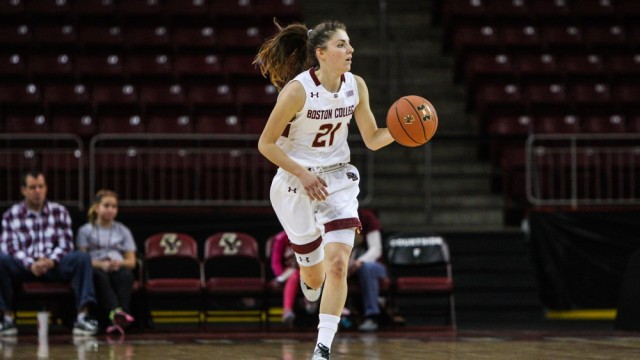 It was a tale of two halves for Boston College women’s basketball in a 73-60 victory over Yale University on Sunday in Chestnut Hill, Mass. The Eagles (12-3, 0-2 Atlantic Coast) entered the locker room at the break trailing the Bulldogs 34-33, but exploded for 40 in the second half to put the nail in the coffin on a two-game skid that included a 25-point loss to Virginia Tech and a 33-point drubbing at the hands of Florida State University.

The Bulldogs (9-8) came out with guns blazing, firing their way to 25 first-quarter points. Flashing an impressive aptitude for quick mental math, BC head coach Erik Johnson warned his team at the end of the first quarter that if it didn’t amp up the defensive intensity, the team was on pace to give up 100 points.

According to Johnson, the Eagles’ positioning was fine. The baseline effort was there. But sometimes, when the opponent seems to be shooting at a hoop twice the regulation size, more is required.

“I didn’t think our defense was bad,” Johnson told BCEagles.com following the game. “But again, we talk all the time of the difference between just sort of being there and basically doing our job and really doing our job to the best of your ability. We upped our level of defense and made it so much harder for Yale, and then that changed the whole face of the game.”

Senior forward Alexa Coulombe, who averages just 14.1 minutes per game, collected five assists and 12 rebounds, including four on the offensive end, in 37 minutes of action. She played the role of high-post facilitator, whipping smart passes to underclassmen centers Mariella Fasoula and Katie Quandt or to shooters in the corners, depending on whether Yale sent a help defender to stifle the high-low action.

For her part, Fasoula poured in 19 points on 9-of-11 shooting from the floor and fell one rebound shy of recording her first career double-double. She established good position early in possessions and effectively utilized the funky, unique one-handed scoop-hook that appears to be her go-to move near the basket. Quandt, Fasoula’s backup, added four boards and nine points in an efficient 3-for-4 effort.

The Splash Sisters, BC guards Nicole Boudreau and Kelly Hughes, each connected on two of their three attempts from downtown in the second half to spread the Bulldogs’ defense thin and open up passing lanes to sealing bigs on the blocks.

Sealing for high-low passes yields more opportunities than just easy lob-over-the-top buckets––it draws help defenders from the corners and puts the offensive player in perfect position to box out her defender and create second chances.

Ultimately, BC was too big to fail. The Eagles rebounded an absurd 40 percent of their own misses, many of which led to easy putback lay-ins. Fasoula snared three offensive boards, and Quandt added two more against Yale’s comparatively puny front line.

After a shaky start to their ACC slate, the re-emergence of the Eagles’ centers, especially Fasoula, came as no surprise to Coulombe, who plays the role of senior mentor.

“I think [Fasoula] realized after our first ACC games how much tougher she’s gonna need to get, and she’s done a great job responding to that,” Coulombe told BCEagles.com.

They must continue to play tough if the Eagles have any chance to compete against their next two opponents, the University of Notre Dame and Duke University, the No. 3 and No. 18 teams in the nation, respectively.
“I’m really proud of our team,” Johnson told BCEagles.com. “We continue to respond, and hopefully this will be a good push into playing the number three team in the nation here on Thursday.” 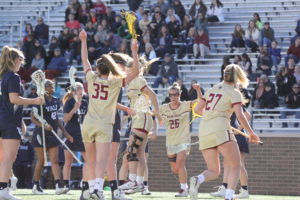