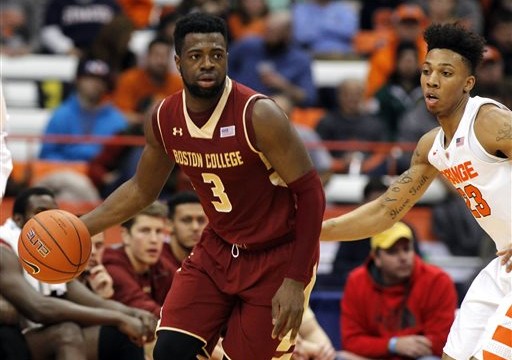 Two teams entered the Carrier Dome on Wednesday night with a grand total of zero ACC men’s basketball wins. Something had to give.

For much of the game, it appeared that neither Boston College nor Syracuse University were in any mood to get in the win column. But by its end, the Eagles (7-9, 0-3 Atlantic Coast) were left in the dust. A cold shooting day from head coach Jim Christian’s crew—BC was a mere 32 percent from the field—led to an easy 62-40 win for Jim Boeheim’s Orange (11-7, 1-4).

Two Eli Carter 3-pointers on BC’s first two possessions provided some fleeting hope. The brief glimpse of promise, however, was quickly thwarted by Syracuse’s stifling 2-3 defense. Boeheim’s patented zone forced the Eagles into a seemingly endless string of deep, low-percentage shots from beyond the arc, with ball movement restricted to the perimeter. Even during the rare moments where the ball was pushed down low, the tall Orange players imposed their will on an outmatched Eagles’ frontcourt. A team that struggles with its 3-point shooting was forced to rely almost exclusively on it.

Syracuse, however, was only a little less sloppy than BC in the first half. The Orange committed eight of the half’s 15 turnovers, providing the Eagles a chance to remain competitive. BC, however, squandered its opportunities, scoring only two points in total off of eight Syracuse turnovers. The Eagles’ inability to capitalize created the perfect storm for a brutal 21-2 Syracuse run. All of this was a recipe for one of the most painful halves of BC basketball in recent memory as the halftime buzzer rang in a 30-15 deficit.

A much better start to the second half was just about the only positive in the game for BC. Christian appeared to have an answer for the zone, as the Eagles relied on more fast-paced transition offense in the first 5 minutes. Cutting the lead to seven after a Carter 3-pointer capped a 9-0 run, BC had clawed its way back into the game with 14 minutes to go. Crisper passing and sharper shooting by BC provided a much-needed confidence boost.

But, all of a sudden, first half BC reared its ugly head once again. The Eagles’ new offensive boost completely stalled, and the team looked as if it forgot how the zone worked again. BC’s guards forced far too many passes, leading to easy turnovers for Syracuse. The most frustrating part of the Eagles offense, though, had to be its struggles with the shot clock. Throughout the game, and especially in the second half, the Eagles seemed to forget they only had 30 seconds to get off a shot. Multiple possessions were ended by the sound of the buzzer, which undoubtedly aroused groans from the few BC fans in attendance. For a team halfway through its season, BC looked like it was still working out preseason kinks.

Following BC’s 9-0 run, Syracuse grabbed a stranglehold on the game via a 16-1 run of its own. Syracuse’s Malachi Richardson scored 13 of his game-high 15 in the second half, securing an Orange victory. The game clock expired in fitting fashion as another errant Eagles pass fell flat out of bounds.

BC finished shooting 15-of-47 from the field. It would be just about impossible to win a game with such a poor shooting performance, especially against an ACC opponent. Carter led the team with 13 points, the only Eagle in double digits, while four members of Syracuse reached that plateau. Freshman Jerome Robinson, who has played well so far this year, struggled heavily, only chipping in two points.

Two blowout ACC losses in a row—to Notre Dame and now Syracuse—leave a bleak outlook on the rest of the team’s ACC schedule. When BC’s student body returns from Winter Break, Conte Forum might be pretty quiet, unless the team can turn it around soon. Next up for BC is a road game at Pittsburgh, which hopefully will not be running any variation of the Syracuse zone defense.