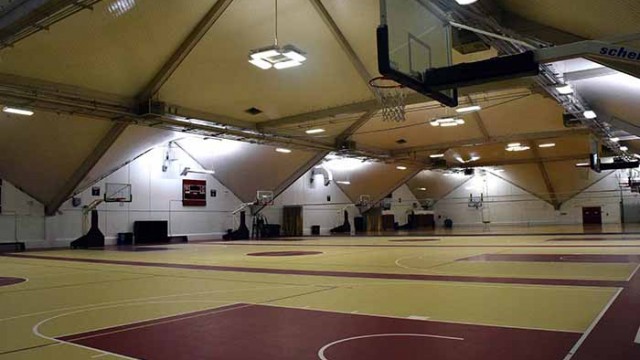 In the most significant of several changes to the Flynn Recreation Complex, Campus Recreation redid its basketball wing with one new wooden court and three newly resurfaced synthetic courts. Because one of the new courts in the Plex has been expanded to NCAA regulation dimensions, the other three had to be shifted and reduced in size. The material used to resurface the wooden court in the Plex was taken from Conte Forum.

According to Rebecca Cegledy, the associate director of facilities and operations, some unsafe bubbling in the old courts’ synthetic material prompted the renovation and the Conte wood acquisition. As a result, the remaining three courts were resurfaced, too. Cegledy now expects that the courts will serve club sports, Plex programs, and Office of Student Involvement projects well.

“I think overall it’s going to enhance our internal programming, as well as events,” Cegledy said. “By having the regulation-style courts, our club sports teams are now going to be able to host more events and more tournaments.”

The new courts are one of several facility improvements over the break. Other changes include new lights over the Plex’s tennis wing and two TVs in the cardio room at Newton Campus’s Quonset Hut. Campus Recreation took these steps to preserve the Plex before the new building project begins.

“It’s an old building that was built in the 1970s, so anything we can do to enhance it is well worth it to make it better for our students and our members,” Cegledy said.

This article has been corrected.