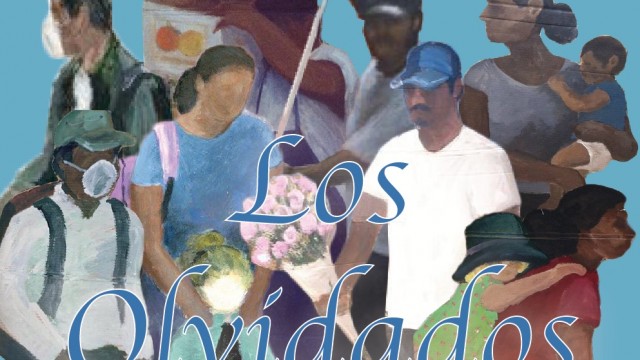 Para Los Olvidados (For The Forgotten) Found in Devlin Gallery

Thursday afternoon, there was something in the Devlin Admissions Office that was both very familiar and fascinatingly foreign. Right next to the main desk was a cardboard cutout of the little girl in a regal dress found in Diego Velazquez’s 1656 painting, Las Meninas. While seeing the little girl from Velazquez’s masterpiece depicted in this medium was strange enough itself, the rest of the cardboard cutout provided a novel and intriguing modification to the world-famous painting. In Velazquez’s Las Meninas, this little girl is being distracted and quieted by what appear to be two of her sisters. In Ramiro Gomez’s cardboard cutout, the little girl’s dress is being adjusted and puffed out by two modern-day Hispanic women dressed in jeans, sweats, and matching black t-shirts. By seeing just this cutout alone, it was evident that Ramiro Gomez’s “pop-up gallery” would prove more poignant, sophisticated, and striking than a “cardboard cut-out” gallery could ever sound.

Gomez lives in Los Angeles, Calif. and bases his work off of gardeners and housekeepers working in the Beverly Hills area. In Los Angeles, Gomez will put these cardboard cutouts out in public, hoping that pedestrians will mistake them for real people. He’ll throw up a painting of a gardener next to some hedges on a street corner or a nanny walking a stroller down a residential street. Generally, these cutouts appear pretty deceiving. It’s interesting that, working on a 2D canvas and integrating it into a 3D world, these cardboard paintings can actually fool the eye for a few seconds. Especially in the pictures framed on the walls in Devlin, it was difficult to tell where the cardboard cutout was for a few seconds. Eventually, of course, you could notice the painting in the picture, but it would take a few seconds’ gaze to really pinpoint where the cutouts were.

While these cardboard cutouts appear to compose the majority of Gomez’s body of work, there were also some paintings on display that, while made on cardboard, are not put out in public. Gomez’s Mulholland Drive: On The Road to David’s Studio and No Splash are two drastically different examples of these types of works. No Splash is a very minimalist painting of a pool cleaner fishing leaves out of a single-shade pool, while Mulholland Drive is a very dense, almost surreal painting of a Ford parked next to an expansive and diverse landscape. These paintings may intrinsically be less of a social statement than Gomez’s public cardboard cutouts, but they still maintain his theme of Hispanics working in Southern Calif.

The Devlin exhibit should be praised for highlighting and promoting this unique artist and his substantive and socially relevant work, but unfortunately, there was only one actual cardboard cutout in Devlin, and the exhibit was limited to a small area that gets such little traffic. These two detractions were extremely disappointing. Imagine seeing Gomez’s cutouts of gardeners, nannies, and housekeepers all around campus. Sure, BC probably doesn’t have the best weather for cardboard paintings to be standing outside all day, but a cardboard nanny walking through Stokes South would have been noticeable and easy to maintain. That kind of exhibit would have gotten an actual conversation going among the student body. With the exhibit in Devlin however, it’s doubtful that many students saw or noticed Gomez’s exhibit.

Apparently, Gomez was supposed to appear unscheduled at the gallery himself, but with the Admissions Office staff not knowing when he would arrive, few or no attendees were able to meet with the artist in person. There was, however, a short video that played on a loop which featured Gomez talking about work and the  message that he hopes viewers walk away with.

“I hope to help develop a conversation about what it is people are doing to strive and work here and how they’re doing it,” Gomez said in the video interview featured in Devlin. “These paintings work as a good conversation starter, and I hope to bring these people more of the recognition that they deserve. With issues that are springing up in states like Arizona and Alabama and, generally, with the criticism that is often given to ‘illegal immigrants,’ I seek to speak about things without pointing any fingers at anybody.”

Gomez’s work should have, by its public and visually arresting nature, started the conversation that Gomez wanted it to on campus, but the exhibit’s minuscule and lackluster promotion and content made it difficult for many students to notice or think about what Gomez was working at. 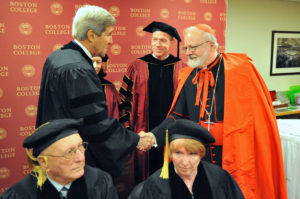