Home » Previewing BC Basketball: What to Expect From North Carolina 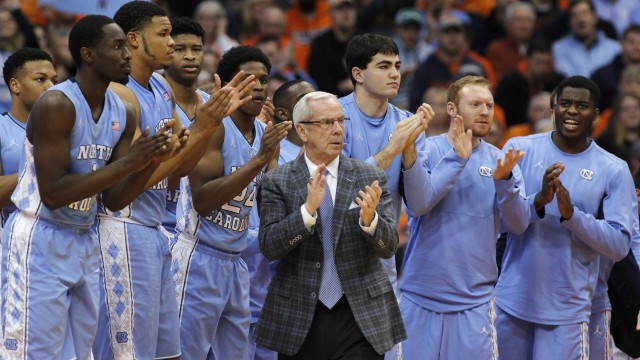 Previewing BC Basketball: What to Expect From North Carolina

Boston College men’s basketball faces its stiffest test of the season on Saturday afternoon, as it travels to Chapel Hill to take on No. 2 North Carolina. The Eagles (7-13, 0-7 Atlantic Coast) are still searching for their first conference victory, while North Carolina (18-2, 7-0) is looking to stay undefeated in ACC play.

BC is coming off a tough 72-62 home loss to Florida State, as it continues to suffer through a down year. With a roster that includes 10 freshmen, these struggles were expected, especially in an ultra-competitive ACC. Senior Eli Carter has done most of the heavy lifting (17.2 points per game) and will have to do more now that freshman guard Jerome Robinson (11.6 ppg) is sidelined with a broken wrist.

North Carolina, on the other hand, escaped with a 75-70 win at Virginia Tech to bring its win streak to 11 games. UNC, the preseason No. 1 in most national polls, has been one of the top teams in the country all season long. Led by do-it-all guard Marcus Paige and a dominant frontcourt of senior Brice Johnson and junior Kennedy Meeks, the Tar Heels find themselves as National Championship favorites heading into February.

BC will be a heavy underdog in the game, as it searches for its first win over a top-five opponent since its historic win over then 25-0 Syracuse in the Carrier Dome during the 2013-14 season.

Last Time They Played: BC and UNC met two times during the 2014-15 season, and the Tar Heels took care of the Eagles on both occasions. In the regular season matchup on Feb. 7, BC stuck around for 30 minutes behind Olivier Hanlan’s 30 points. The Tar Heels, however, were ultimately too much to overcome, and they walked out of Conte Forum with a hard-earned 79-68 victory. The second matchup between the two rivals occurred in the second round of the ACC tournament on March 11, and it was a much more one-sided game. North Carolina overcame a relatively slow start and cruised to an 81-63 win.

north carolina jerome robinson eli carter
Eagles Get Revenge Over Notre Dame as Demko Ties Shutout Record
Did Sia Reinvent Herself or is She is Simply ‘Acting?’