Home » Savages Relish in the Sublime Beauty of Silence 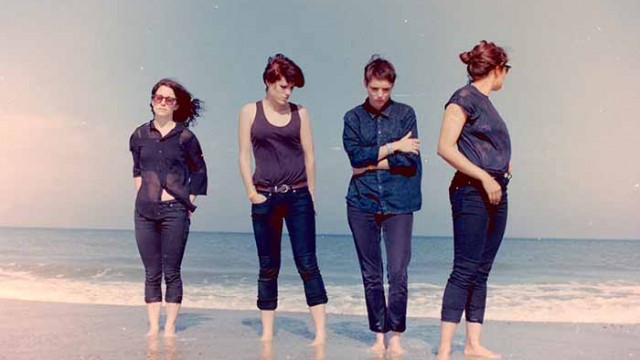 Savages Relish in the Sublime Beauty of Silence

What place does silence have in music? Could there be music if there wasn’t silence? These seem to be the questions that the all-female London quartet, Savages, tries to answer on itssecond full-length effort, Adore Life.

It seems ironic that Savages would try to answer this question now, when its first album was titled Silence Yourself. That album, like every great punk album, punched you in the face. And that’s exactly what Savages wanted, as frontwoman Jenny Beth told Pitchfork two years ago: “We’re submerged by voices, opinions, images. They take us away from who we are. The idea with Savages is to get back to this more focused attention, so you’re harder to reach.”

Now, Savages seems able to explore silences because of its excellent rhythm section. The bass slithers through every song like the blood coursing through the veins of the record, red, robust, and alive, while the drums are the heartbeat: sometimes galloping and out of breath, other times serene, but always steady and full of life.

This sensibility is best heard on two tracks: the semi-title track, “Adore,” and the sixth song, “I Need Something New.”

The aforementioned “I Need Something New” starts off with no sound at all, other than Beth’s scratchy vocals that often turn into a growl as she sings, “I need something new in my ears.” After a pause, she continues, “something new you could say perhaps.” Her voice cracks on the word “say,” like a boy going through puberty. It is startling. Then the song explodes with running drums and layered guitars, one of the noisiest tracks on the record.

The vivacious “Adore” is defined by its creeping shuffle and aided by a silky baseline that threads itself through the entire song. Likewise, the soft snare drum adds just enough momentum for the song to seem as weighty and important as its subject matter: a love of life. In the verses, she sings of lust and hunger and then on the hooks she states: “I understand the urgency of life / In the distance there is truth which cuts like a knife / Maybe I will die maybe tomorrow so I need to say / I adore life.” It is one of the album’s best songs.

Just because the members of Savages now adore their lives—complete with a fan base ranging from Iggy Pop to Johnny Marr—doesn’t mean they still can’t be pissed off about it, as on “T.I.W.Y.G.” during which Beth chants, “This is what you get when you mess with love.” What you get, apparently, is storming guitars, heavy drums and “suffering, straight from the gods.”

As a whole, this record is great. It’s tight, cohesive, and all members are seemingly masters of their instruments. But there is something missing. The band seems content to let exceptional playing make up for a lack of sharp lyricism. The package the members put things in is shiny, pretty, and just a little tattered. Apparently, punk has gone high fashion for Savages. But when you look inside, you find that what they’re saying—expect for on the above-mentioned tracks—is not all that grand or new. It is simplistic.

Savages is one of the tightest, most musically adept bands you’ll hear playing today, but does that really matter if you can’t connect with what it’s saying?