BOSTON — Thatcher Demko is a top-notch goaltender. Ask anyone—especially one of the eight teams that he has shutout this season, or the nearly 6,000 people out of 40,000 voters so far who have chosen him as their pick for this year’s Hobey Baker Award, the sport’s highest honor. Of course, the fan vote is only a small part of the overall selection process. But it says a lot that the nation’s hardcore college hockey fans think a goalie is worthy of an award generally reserved for forwards.

Even on a night when he wasn’t at his best, he held Harvard to just two goals—both of which came at odd points—and his offense picked him up, returning from a first-period deficit and a loss in the first round of the Beanpot last year to take a 3-2 win for Boston College men’s hockey. But even the man who often carries this team couldn’t do it alone.

Coming into the first game of the Beanpot—a rematch from last year’s consolation round, which the Eagles won 3-2—BC (18-4-4, 10-1-4 Hockey East) led Harvard (12-5-3, 8-3-3 Eastern Collegiate Athletic) in nearly every basic team statistic but one: power play percentage. BC has maintained a remarkable percentage for its kill, entering the game leading Hockey East at 86.1 percent along with eight short-handed goals. With an extra man on the ice, the Eagles haven’t been nearly as dominant, succeeding in just 19.6 percent of their opportunities.

The Crimson began the day with a 31.9 power-play percentage, second-best in the nation—its kill, on the other hand, was at an impressive 85.5 percent. But on Monday evening, it was BC that made the most of its chances, scoring on each of its first two power plays while the Crimson came up empty.

“We hadn’t been moving pucks too well, and tonight we were just moving them quick,” freshman Colin White said. “That’s what we’d been working on in practice this week.”

BC dominated the flow of the game early on, rattling off three quick shots in the direction of the goal in the first minute. As Harvard scrambled to clear the puck, its defense left Casey Fitzgerald open in front of the net. His brother, Ryan, found him just a few seconds later, and Casey blasted it in on the left side, giving him his third goal of the season and BC a speedy 1-0 lead.

The Eagles’ defense continued to control the pick for most of the period, holding Harvard without a shot for the first 10 minutes. Unfortunately for Demko, this came on a breakaway spring for Ryan Donato, who had been in the right place at the right time on a rebound that flew out from Harvard goalie Merrick Madsen. Two BC defenders raced neck-and-neck with Donato, but he kept ahead and slipped one by Demko on the right side.

Five minutes later, the Crimson took its second shot on net and notched another goal. And again, there wasn’t an easy chance at a stop for Demko.

As Harvard forward Jimmy Vesey sprinted down the ice, he was swallowed up by BC’s defenders, causing him to lose the puck and his footing. He toppled over and slid straight into Demko, who lost his own stance as he partially fell over the top of Vesey. Demko lost his stick as he stood back up, but no whistle had blown. Just a few seconds later, Adam Baughman got the puck in the middle of the ice and shot it straight under Demko’s legs, where it trickled in for Baughman’s first collegiate score.

But then that was it. Demko became an impenetrable wall for the rest of the game, stopping all 21 shots he faced. He had a few especially strong saves on the first of Harvard’s two power play opportunities toward the end of the first period.

Then in the second period, BC got back on top.

BC capitalized on its first man advantage in the second frame. Ian McCoshen—who had been up to his usual strong enforcing during the first period—fired a rocket from just in front of the blue line. Madsen got in front of it enough to knock it off to the side, but the puck found Alex Tuch, who in turn hit his open linemate Zach Sanford for an open goal.

They weren’t done there. Captain Teddy Doherty sold an interference call midway through the period, giving BC its second 5-on-4. This time, it was freshman Colin White getting in on the scoring action, putting away his team-leading 16th goal of the season.

With scores on both power plays, BC has continued a recent trend of improvement with the man advantage. Head coach Jerry York credited Greg Brown after the game for establishing the “no dust rule,” which is aimed at preventing stagnation on power plays.

The lead BC got from those two was all it would need.

Austin Cangelosi was called for slashing in the latter half of the third period, but the Eagles successfully killed Harvard’s second, and final, power play. This win gives BC a spot in the Beanpot final, where it will face the winner of the other first-round game between Boston University and Northeastern.

“As we prepared for this tournament—my 22nd Beanpot—of those, this is the most balanced field of major players in college hockey now,” York said. “We’re all on top of our games.” 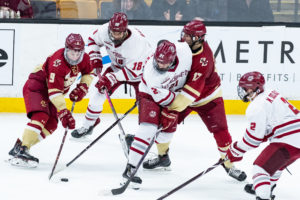