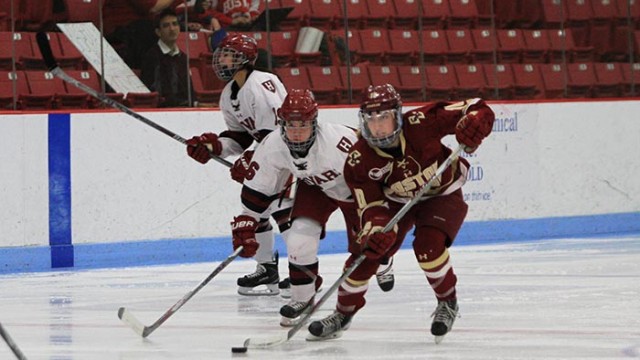 Monday night, BC men’s hockey’s 3-2 win against Harvard was a nailbiter. Today, the women’s game was anything but.

From the puck drop, the Eagles controlled the pace of the game, pressuring the Crimson’s defensemen and creating red zone turnovers that fueled the offense in an 8-0 blowout. This victory, coming against the same team that ended BC’s unbeaten streak last year in the Beanpot, tastes sweet.

In just a year and a half of collegiate play, sophomore goaltender Katie Burt has seen a lot of Harvard’s Emerance Maschmeyer—probably more than she’d like. The two netminders seem to be on a collision course with one another, and their meetings always tend to be in the season’s biggest games. Last year, Maschmeyer bested Burt in the Beanpot and Frozen Four, while Burt stole a regular season win. Leading up to Tuesday’s standoff, the goaltenders were 2-2 against each other in their careers, with the most recent matchup coming in January (BC won 2-0).

Unsurprisingly, their 2015-16 stats leading into the semifinal were nearly as identical as their head-to-head records. Entering the day, Maschmeyer edged out Burt in save percentage, .951 to .950, but Burt held the advantage in goals against average, 1.08 to 1.56. But the Beanpot semifinal game saw two very different outcomes for two of the nation’s best goalies.

Maschmeyer struggled against an all-out blitz from BC’s forwards, allowing two goals in a minute before surrendering a very saveable goal from Toni Ann Miano. The Crimson senior was bombarded with 20 shots in the opening 20 minutes, and never seemed comfortable between the pipes. Then again, it’s hard to find your groove when you’re surrounded by a sea of maroon and gold in your own defensive third of the ice.

Maschmeyer would go on to concede five goals in the opening frame before being pulled out for backup goalkeeper Brianna Laing. It would be an understatement to say that Maschmeyer’s premature exit was shocking, considering her reputation for anchoring Harvard’s defense.

Meanwhile, Burt was flawless. She finished with only 12 saves—her third-lowest output in a full game this season—but that is merely a testament to her defense’s lockdown effort. With her 10th shutout and her 53rd career win, she cements herself in the national conversation for best goalie in women’s hockey. Oh, and by the way, she just turned 19.

Defenseman Megan Keller and the rest of the blue line put on a show for 60 minutes on Tuesday, blanking a solid Crimson team and only allowing 12 total shots on goal. Not only did the defense protect the net, but it also created turnovers and pushed the puck on counterattacks to create offensive opportunities all day long. Keller was the clear catalyst, racking up two goals and an assist to improve her point total to 34, first in the entire country among defensemen. She also had help from fellow defensemen Grace Bizal, Miano, and Lexi Bender. Bizal helped open up the scoring four minutes into the game when she assisted Tori Sullivan on her sixth goal of the season to give BC a 1-0 advantage. Sullivan, a notorious Crimson killer, has six career assists against Harvard, including two during BC’s 2-0 win earlier this season.

Miano later added a goal and an assist as the defense pushed up and hounded Harvard with stellar puck movement and shooting. Bender got in on the action five minutes into the second period, pushing the lead to 7-0 with a flick past Laing into the back of the net.

When your defense alone is scoring significantly more goals than it’s allowing, you know you’re doing something right.

There must be something in the ice at Walter Brown Arena. Or maybe it’s the old-school aura of the pavilion that has been home to countless notable games in its four decades of use. Either way, Makenna Newkirk has had career days on Babcock St. this season in her first two games at the historic rink: first against the hometown Terriers and now Harvard. The first, on Nov. 7, featured a hat trick courtesy of Newkirk as the Eagles flew past BU in an 8-1 rout. Against the Crimson, Newkirk was once again red-hot as she notched three assists to push her season total to 16. Whether on the distributing or finishing end of the scoring, Newkirk has been difficult to stop on enemy ice. Luckily for the Eagles, next Tuesday’s championship game is at none other than Walter Brown Arena. Don’t be surprised if the freshman forward has another big day when it matters most against Northeastern.