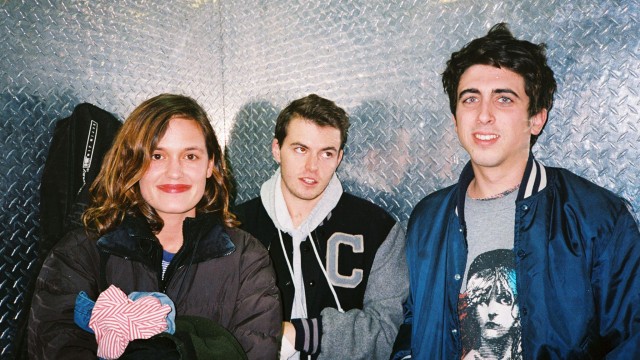 It’s not often that the world celebrates a broken heart. In fact, female songwriters are often criticized for writing about their pained emotions—for example, Taylor Swift’s receiving hate after supposedly writing 1989 about ex-boyfriend Harry Styles. Yet Kelly Zutrau, the lead singer and driving force behind indie-pop trio Wet, has crafted the perfect balance between heartbreak and beauty on the group’s debut, full-length Don’t You, an album that is making the world rethink the heavy-hearted ballad.

The album begins with “It’s All in Vain,” the band’s current number-one track on Spotify. The emotional track narrates someone’s losing trust in his or her partner, lamenting, “I don’t believe you when you / Tell me that you love me most / And when you tell me I’m the only one.” Culminating in Zutrau’s lyrical character’s leaving her unfaithful partner behind, the slow piano and drum machine-based track show more powerful resolve than helpless heartbreak. “Deadwater” continues along the same trend, yet with a more bubbly melody. The lyrics recount Zutrau’s suffering in a relationship and “shaky” feeling upon it ending, but end in her claiming that “there are better things for me,” and that when the breakup occurred, it happened “for a reason.”

Don’t You continues with “Don’t Wanna Be Your Girl,” a heartfelt explanation for ending a relationship that originally appeared on the band’s self-titled 2014 EP. The track has over 17 million listens on Spotify, has garnered nearly a million views on YouTube, and has been covered by pop artists like Troye Sivan. The next track on the album looks to mimic this success, and is no disappointment after the older track. “Weak” is currently Don’t You’s best-seller on iTunes, and marks a significant uptick in energy on the album. In contrast to the increase in tempo, instrumental support, and liveliness on the track, the lyrics show Zutrau’s first plea to her ex to stay, claiming that “If you’re leaving / You’ll only take from me.” The motivational pop vibe of this song is a beautiful mask for the apparent pain in the lyrics—the scar tissue over what was an open wound.

“Island” follows with the vocals of a Bon Iver cover and the accompaniment of a late-90s R&B track. Wet’s constant juxtaposition of its R&B and indie influences as exhibited in this song, is an integral part of its unique, pop-ish sound, which is setting it apart from similar groups. “All the Ways,” one of the album’s highlights, follows “Island,” immediately kicking into a vibrant drum rhythm unlike any other song on the album’s purposefully unpredictable percussion set. Zutrau’s vocals on the track are multiplied and layered to create the appearance of a girl band, an image that would not come to mind while listening to most of the album’s soulful, bare ballads. “Small and Silver” follows, using the same strong percussive devices, but invoking none of the sugary energy supplied by “All the Ways.”

“You’re the Best” is another track from Wet’s EP, starting with Zutrau performing a cappella through electronic effects. By the third verse of the song, these effects are shed in favor of a bubbly guitar riff, unlike the strident chords found on other tracks. Lyrically, this song is particularly interesting, mentioning a “Rosalie” in the back of her lover’s mind. Zutrau claims in “You’re the Best” that the couple will be able to “work out all the rest,” a promise that, unfortunately, did not come true, as told by the more-recently released Don’t You. The album’s next track, “Move Me,” actually begins with a similar style of finger-picked electric guitar as found in “You’re the Best,” a skill the band chose to keep closeted until the tail end of the album. The track is a challenge for her significant other to choose between “saving” her or “moving” her—loving her or letting her go. Slipping into third person during the chorus, Zutrau informs the listener that he chose to leave her behind, a fact that, at this point in the album, is as tragic for us as it is for her.

“Body” is an anthem of self-doubt that describes an attempt to find solace in another person’s affection. The painfully relatable sentiment is accompanied with percussion that demands to be clapped along to, and subtle strings that ground the peppy music to the more emotional lyrics. The album’s final track, “These Days,” sheds the drum machine entirely, in favor of returning to the more wistful tone of its first songs. Zutrau claims, “These days I can’t take too much / I’ve been falling down, falling behind,” over a swelling company of string instruments and little other accompaniment. Finally fading out with a diminished piano medley, “These Days” guarantees that listeners leave the album feeling emotionally raw, as they did first listening to the opening songs.

Proven by the exceptional crafting of its first full-length album, Wet might just be the band to watch in 2016. The trio of Zutrau, Joe Valle, and Marty Sulkow is overwhelmed with talent, exemplified in tracks “Don’t Wanna Be Your Girl,” “Weak,” and “All the Ways.” This is not the last you’ll hear of the indie-pop group in reviews, and certainly not the last I’ll be hearing of Don’t You’s power-breakup songs.