Home » When Artists Lose the Need to Experiment and Take Risks
Arts, Column

When Artists Lose the Need to Experiment and Take Risks

With the recent passing of David Bowie, I’ve spent some time considering the services that pop stars offer society. In the formative years of modern popular culture, such individuals acted as gatekeepers. They helped inform ordinary people of the evolving tastes in music, art and fashion. As such, pop stars were perhaps the most reliable intermediaries between a predominating cultural attitude and the individual. In fact, before the Internet, pop stars had a practical monopoly over the transmission of such information.

Many artists like David Bowie had an opportunity to elevate the quality of popular culture. Because there weren’t many alternatives, artists could challenge listeners with more extreme elements of an aesthetic while still retaining popular appeal. These days, the Internet has democratized the music industry. Websites like Soundcloud and BandCamp have made it easy for anyone with a recording setup to release material for public consumption. Consequently, competition between artists for that popular audience has intensified. Whereas before, pop stars could freely integrate experimental elements into their craft, the increased competition to attract target demographics has had a dulling effect on popular music. In order to remain attractive to the shapeless masses, popular artists are less likely to introduce anything that radically departs from their established sound. This is not unlike political candidates gravitating towards the center prior to an election.

For example, Rihanna’s newest release ANTI offers only the slightest departure from her earlier works. Comparing her latest album to her first release that dropped 11 years ago, there is certainly some growth. The years have seen Rihanna progress from being a dance pop artist to embracing the more introspective elements of R&B. Nonetheless, critics clamoring to view this relatively mundane transition as a significant development in popular culture have largely overstated her evolution as an artist. Comparatively, after having been in the public spotlight for ten years, Bowie revealed 1977’s Low. The album was groundbreaking in its use of the most modern production techniques and electronic textures.

The second side of the album delved deep into experimental instrumentation, eschewing the relatively approachable songwriting of Bowie’s previous efforts. From Space Oddity to Low, Bowie went from typical ’60’s psychedelic folk rock to embracing strange, totally left-field avant-garde aesthetics. It’s uncertain whether a modern listening audience would have awarded the transition with commercial success. Nonetheless, Low went gold. With today’s competition to capture the attention of the most average music listeners, it’s hard to imagine a current commercial artist who’d be willing to jeopardize his relationship with the bulk of his listeners.

David Bowie was great because he could challenge fans with progressive sounds without fear of total backlash. Modern pop stars don’t possess the same privilege. As a result, it’s become harder for the average music listener to be introduced to new sounds. David Bowie didn’t necessarily offer the most radical albums of his day, but he introduced listeners to certain elements that they could explore further. The same can’t be said for modern pop stars like Rihanna. In fact, it may be easier to find groundbreaking music from a no name, independent artist than your favorite commercial act. 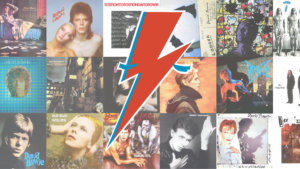