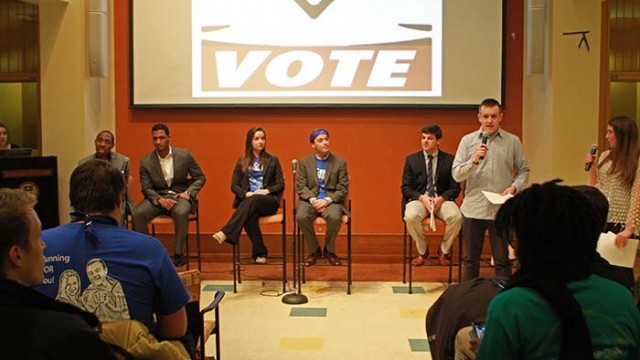 UGBC Debate Should Strive for Objectivity

Recently, a team running for the Undergraduate Government of Boston College presidency has called for a change to the questioning process of the UGBC presidential debates. In the past, questions drafted by the executive board, the AHANA Leadership Council, and the GLBTQ Leadership Council were asked during the debate. The campaign of Elizabeth Foley, MCAS ’17, and Joseph McCarthy, CSOM ’17, hopes to stop this practice, citing a conflict of interest in those drafting the questions.

This conflict stems from the fact that some of the candidates running for president are also current members of UGBC and, through this, are already in contact with the members of these two committees drafting the questions. In order to prevent this conflict of interest, the questions would instead be provided solely by the Elections Committee, an independent group of undergraduates.

Considering the fact that some candidates are already directly involved in UGBC, the conflict of interest is clear. By delegating the entire question-making process to an external group, UGBC would preemptively minimize any possible accusations of unfairness and ensure that the election allows every voice running to have an equal chance. The Elections Committee has recently become a more transparent organization and has proven itself to be an objective force in these elections that would be able to handle the entire question-making process without opening it up to any perceived favoritism.

A system that allows members of UGBC to prepare questions for candidates who are also members of UGBC opens itself up to biased treatment. However unintentional it may be, this system creates a situation that could be supportive of candidates who already have a place in the executive structure of UGBC. Outsider candidates are an important part of the presidential cycle and prevent the election from appearing exclusive, while also bringing viewpoints that might not have normally been represented.

An important part of this to remember is that the ALC and GLC are both special-interest groups within UGBC, representing AHANA interests and LGBTQ interests, respectively. They are normally given the role of drafting questions so that they can challenge the candidates about their stances and policies regarding these issues. If the question-drafting duty is taken away from the ALC and GLC, then the Elections Committee should be certain to remember these two interests and give them due representation in the debate process.

As long as the questions still address the varied interests surrounding the debate, removing the UGBC groups from the process should put all those running on more even footing.