Home » How to Learn to Love Your Body
Opinions, Column

How to Learn to Love Your Body

You were with me before I knew myself. You were with me when I forgot myself. For as long as I can remember, you’ve been with me. I can’t remember a moment that we haven’t been together. For better or for worse, for richer or for poorer—we’re committed. I say this even though you already know: I love you.

I’m not afraid to say this, even though it makes my friends laugh: I love my body.

How many of us actually appreciate our bodies? Most of us seem to view the relationship as an arranged marriage, made long before we could protest. We desire the freedom to marry more attractive bodies. We’re trapped in the unhappy homes of bodies that don’t fit as we’d like. Besides, the degree of attachment between body and mind appears unhealthy within the context of all other relationships we’ve known. But because the body and the mind together compose the individual, they can’t be viewed separately. Imagine two lovers trapped in a single body, speaking in a single voice: a relationship that intimate, however natural, unnerves even the clingiest of us.

We choose instead to view the body as a task. We exercise, eat reasonably healthy, and we occasionally sleep. This is our contract: take care of the body, and in return, (generally) reap proportionate benefits. It’s a professional relationship for us that we rarely acknowledge, except when it proves inconvenient.

I didn’t consider my body as more than a set of tasks until Winter Break, when I realized how happy I felt when I was healthy. I began to view my body as a partner, a teammate—when I treated it with more respect, I saw encouraging results. Working with my body to meet its needs meant that my mind was sharper and fresher, which led me to treat my body more kindly, and so on. It’s a cyclical win-win situation.

The way that we treat our bodies is often unfair and unhealthy. We play the part of tyrants, accepting the benefits that bodies offer while refusing to give them much in return. We complain when they can’t correct every mistake that we make. And we accept what other people tell us about the statuses of our bodies—so that those bodies we should love can become objects of our disdain. This means that the relationship that most directly and most often affects us is constantly jeopardized.

For more perspective, I spoke with Zach Russell, MCAS ’16, who struggled with anorexia and binge-eating his freshman year. He’s since written about his experience for Elite Daily and uses it as material for his comedy routines. He agreed to the interview without hesitation.

Zach related his experiences candidly and with humor, gaining momentum as he told one familiar story after another. But when I asked him how he viewed the relationship between the body and the mind, he paused before answering:

“I’m always going to be focused on it, and it’s never going to be off my mind. It’s a constant maintenance thing.”

“So it’s a commitment,” I prompted.

“Yeah,” he said after thinking for a moment, “I agree with that.“

Later, Zach added: “I’m worried I’m not giving you what you need. I feel like I don’t have as many—maybe I should—theoretical or philosophical things about self and the body as I do personal experience. I haven’t theorized about it that much.”

In that moment, I felt like I’d struck gold—Zach had pointed out the same problem I saw. It had taken me 20 years to consider the purpose of my body and its relationship to me. And the more I thought about it, the more I wondered if maybe that’s part of the problem with America’s perspective—we don’t bother to consider the body. We work with it, brand it, discuss it, but we forget to appreciate it as more than a means. We forget to love it.  But until we can reconnect these disjointed parts of the individual, we have to commit ourselves to courting them. We have to recondition the love—and that means recognizing the relationship in the first place. Let’s compliment our bodies instead of constantly criticizing them. Let’s consider how our actions will help our bodies. As we become better speakers and listeners, we’ll notice that our bodies are willing to make concessions—and that they tell us when they need something. They’re not hard to please—if we bother to give them the time of day.

In the meantime, the mind and body continue to turn on each other, struggling for control—as indicated by Zach’s later descriptions of the mentality behind eating disorders.

“In the under-eating, there’s this weird kind of sick sense of pride,” he explained, “Underneath there’s self-loathing as well, but at the time I was actively feeling, ‘Oh, this is good, I should keep this up.’ [Over-eating] was the more emotionally tasking one, by far. ‘Cause you lose control, and you feel like you’ve been regressing to this lower point as a person. I think it was pent up after the under-eating.”

In short, anorexia demonstrates the mind’s attempts to dominate the body. Binge-eating serves the other extreme, in which the body rebels against its enslavement and overthrows the mind. The mind, usurped, turns on itself and falls into self-loathing. Both partners violate boundaries and upset the natural balance in the process.

Body and soul are not equal in the sense that we commonly ascribe to relationships; they can’t “talk” about their issues, since one is action and the other is that which guides and reasons it. We can’t claim that the body is “just as smart” as the mind—but we can’t mark the mind as entirely superior, either. One is thought, the other action. And when the two act in communion, that union is entire. It’s the body bending to the mind and the mind reacting to the body, the two knit so tightly together that we can’t decipher, exactly, where one ends and the other begins. An infinite union within a disjointed world. 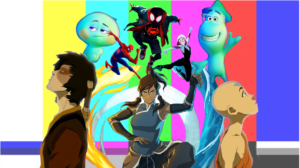 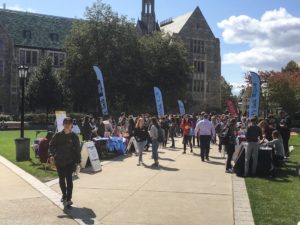