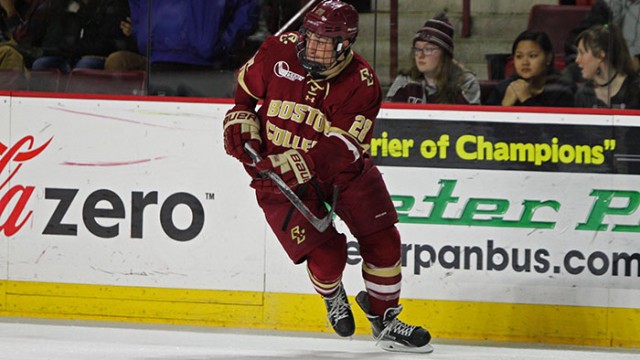 On University of Vermont’s men’s hockey Senior Night, Boston College completed its weekend sweep of the Catamounts and, with Providence’s 3-1 win over Notre Dame, extended its first-place lead in Hockey East to three points with only two games remaining.

BC (23-4-5, 14-1-5 Hockey East) continued to ride its nation’s current best unbeaten streak that has now reached 14 games with a 4-1 win against Vermont (12-18-3, 6-11-3). The Catamounts could not slow down BC’s quick skaters, and struggled again on special teams by failing to convert on any of their nine power-play opportunities.

The first power play for UVM came just 1:29 into the first period when Alex Tuch was sent to the box for boarding. Vermont’s power play woes from the previous game continued. Casey Fitzgerald got deep into the Catamounts’ zone and get a shot on goal to disrupt the Catamounts’ momentum during the power play. BC goalie Thatcher Demko was also key for the penalty kill, as he stopped three shots in a row, including a difficult pad save.

BC then went on a power play of its own, but couldn’t find the back of the net, despite shots on goal from Ryan Fitzgerald, Adam Gilmour, and Alex Tuch. Even after UVM killed the power play, the Eagles continued their attack on goal. Casey Fitzgerald beat UVM goalie Packy Munson, but just missed a goal after his shot deflected off the crossbar.

The Catamounts broke through 14 minutes into the first period, as Mark Puskarich beat Demko glove side on a wrist shot that was assisted by Craig Puffer. This was UVM’s first power-play goal of the weekend, and was a brief change in momentum. But it wouldn’t last much longer.

The Eagles notched the equalizer 19 minutes into the first period. Casey Fitzgerald shot the puck on goal, and Munson was unable to corral the rebound. Gilmour got his stick on the puck and whipped it past the freshman goaltender just as a BC power play expired to tie the game up.

The second period was much sloppier for the Eagles, as they were outshot by Vermont 14-10, and were forced to kill three penalties. Ian McCoshen picked up the first penalty for roughing five minutes in. Ryan Fitzgerald’s stick broke early on in the power play, and though the Eagles were in their defensive zone for the entire two minutes, they successfully killed the penalty.

BC went several stretches of the second period without a shot on goal, at one point going nearly 10 minutes without a shot. The Eagles also missed several key opportunities to get their offense going while continuing to get cursed by the zebras. They picked up another penalty against Ryan Fitzgerald at 9:47, but UVM’s chances to score were again stopped by Demko and with key clears down the ice by the BC defense.

The Eagles’ offense got going late in the second period, as it launched a flurry of shots on goal from Miles Wood, Steve Santini, and Austin Cangelosi. Even though it had seven shots on goal in a row, BC still couldn’t find the back of the twine.

BC picked up its third penalty of the second period on a slashing call on Matthew Gaudreau with 2:35 left in the period. Again, they were able to successfully clear the puck several times, and got one shot on goal right before the period ended, but went into the second intermission still tied with UVM, 1-1.

After two frustrating periods offensively, BC finally broke the game open in the third period. UVM picked up a penalty 30 seconds into the period, and the Eagles kept the pressure on for the entire power play. Cangelosi scored his 16th goal of the season—his fourth in as many games—just as the power play expired, on a shot from an angle that even Munson could not believe.

BC went on the penalty kill for the sixth time as Wood went to the box for goaltender interference six minutes into the period. Demko lost his stick just seconds into the power play and had to use a defender’s stick, but the rest of the special teams came together to kill the penalty despite a last second scramble in front of the net by UVM. Just 30 seconds after BC killed its penalty, Ryan Fitzgerald netted his 17th goal of the season on a wrist shot from the right circle to beat Munson and put the Eagles up, 3-1.

The Eagles and Catamounts were called for matching penalties late in the third season for hooking and goaltender interference, respectively, and while Demko was slow to get up after the interference, he continued in the game. He made his best save of the night against Brady Shaw, kicking out his leg at the last moment to rob Shaw of a sure goal.

BC got its last penalty of the night with 2:35 left, and Vermont pulled its goalie for a 6-on-4 advantage. But still, the Catamounts couldn’t capitalize, despite their last minute attempts. Ryan Fitzgerald put the game out of reach with an empty-net goal two seconds before the end of regulation.

The Eagles’ win tonight gave them a sweep of the Catamounts, and four more points, controlling their own destiny going into their last series of the regular season against UMass Lowell. To clinch the Bertagna Cup for Hockey East’s best regular-season record, the Eagles will only have to win one of their two games in a home-and-home with the River Hawks, or hope that Notre Dame (two games against Boston University at home) or Providence (a home-and-home with Massachusetts) can’t overtake them.