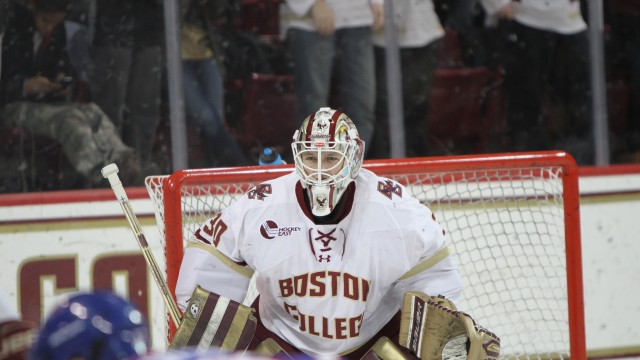 BC’s Men and Women Are the Clear National Title Favorites

Don’t be fooled by the pathetic state of Boston College basketball, both for the men and women: this is an exciting time.

Stay with me now. Think about the non-profit sports, like the soccers, field hockey, and lacrosse. Or how baseball is looking up, likely en route to its first postseason bid in the Mike Gambino era.

Or, more importantly, how the Eagles are the favorites to win not one, but TWO national championships.

The boys who create the PairWise Rankings for the USCHO.com poll may not agree with me, but it’s without question. As the calendar turns to March and playoff season begins, BC men’s and women’s hockey are in prime position to make the nation (or, at least, this athletic department) completely forget about the failings of BC’s other three profit sports.

An argument for the women is an easy one. To do that, let’s take a look at the only group that comes close to them.

Katie Crowley’s crew is only the second team in women’s college hockey history to make it through 36 games without a loss. The other team that accomplished this feat, Brad Frost’s 2012-13 Minnesota team, finished the season raising a trophy. So how do these two match up?

The Golden Gophers led the nation in both goals scored (5.27) and goals allowed per game (0.88). They had a dominating goaltender in Noora Raty, who now lives in between the pipes for the Finnish national team. Raty, by far the best netminder in the sport that year, led the nation in save percentage (.956) and shutouts (16), and was second in goals against average at 0.964.

Offensively, they outscored second-place BC by almost a full goal, and had a cripplingly dangerous top line, featuring two superstars. Hannah Brandt, the No. 2 overall pick in the inaugural NWHL draft by the Connecticut Whale, amassed 33 goals and 49 assists as a freshman. Her 82 points are among the highest for a single season in the sport’s history.

Yet she wasn’t even the best on her own team.

Minnesota boasted the 2013 Patty Kazmaier Award winner, Amanda Kessel. She became only the fourth player ever to surpass 100 points in a single season—46 goals and 55 assists. And Kessel is often considered among the greatest players of all time.

Now compare that to BC’s squad from this season. The Eagles top the country in scoring at 5.42. That’s more than the 2012-13 Golden Gophers, though the margin between them and second-place Minnesota is only a half a goal. Like Minnesota, BC has a shining top line led by women’s hockey’s version of Jordan and Pippen. Alex Carpenter, the 2015 Patty Kaz winner, is on a torrid pace again with 77 points—second-best in the nation with 38 goals and 39 assists—while her partner, Haley Skarupa, is right behind her at 30 goals and 38 assists.

But unlike that Minnesota team, which had the core of scoring solely around Kessel and Brandt, these Eagles are deep. Eight other players are on the top 75 in the nation, including senior captain Dana Trivigno, freshman sensation Makenna Newkirk, and the country’s leading scorer among defensemen, Megan Keller.

BC doesn’t lead the nation defensively, but its goaltender is no slouch. The Eagles rank “only” third in GAA at 1.12, but Katie Burt has still been fantastic this year. She has a .944 save percentage (fourth), 12 shutouts (third), and a 1.17 GAA (third). Though Burt hasn’t faced many shots, it shouldn’t be a problem. She has been anchored by a phenomenal defensive corps headed by Keller, Lexi Bender, and Kaliya Johnson that stifles offensive opportunities before opposing teams can even muster them.

Only two teams could stand in BC’s way: Wisconsin and this year’s rendition of Minnesota. But neither have the overall fortitude of the Eagles. The Badgers have the country’s best goaltender in Ann-Renee Desbiens, who has allowed a mere 0.72 goals per game. While their offense is strong, scoring 3.89 goals per game, they only have one real threat: sophomore Annie Pankowski. The Golden Gophers are the opposite. They’re still strong at scoring: Brandt is still around, newcomer Sarah Potomak is making waves as an up-and-comer, and Kessel has returned from a two-year hiatus caused by concussion symptoms. But goaltender Amanda Leveille isn’t as elite as Burt. And Minnesota’s defense isn’t as strong.

Okay, it shouldn’t have been hard to convince you that the women can finish the mission they started last year. But the men’s case might seem a little more shaky. After all, BC isn’t the top team in the country, and a lot of teams surround it at the top of the rankings. But it’s actually just as strong.

Unlike the women, the men’s field is slightly more open. Any of the top six in the PairWise Rankings should be considered a “favorite.” That includes, in order as of Feb. 28: Quinnipiac, North Dakota, St. Cloud State, Providence, BC, and Michigan. But, even with the Eagles in the five-spot of that group, they’re still the safest pick.

Michigan has all of its strength up front, touting the nation’s highest-scoring offense at 4.73 goals per game. Kyle Connor leads the nation in points, Tyler Motte in goals, and J.T. Compher in assists, not to mention a punishing defenseman in Zach Werenski. Yet the Wolverines play in the Big Ten, one of the country’s worst conferences. They’ve eaten up the weak like Wisconsin and Ohio State, challenged only by teams on the fringes of NCAA Tournament contention, like Minnesota and Penn State. And goaltender Steve Racine is one of the worst in the sport. He gives up a whopping 2.77 goals per game, 50th (50th!) among qualifying goalies. If the Wolverines run into a hot goaltender (read: Demko, Thatcher), there’s no chance Racine will stay strong enough to win a low-scoring affair.

Quinnipiac also fails the difficulty test. The ECAC, while not as easy as the Big Ten, WCHA, and AHC, doesn’t match up to Hockey East and the NCHC. Quinny’s most impressive wins, a sweep of St. Cloud State, came way back in October. The Bobcats’ ability to grit out wins is impressive, but let’s not overlook the facts: NINE of 14 games since 2016 have gone into overtime. They’ve got a couple of dangerous scorers in Sam Anas and Travis St. Denis, but their depth isn’t as strong as a team like BC. And goaltender Michael Garteig, though fourth in goals against average, is down to 18th in save percentage. This isn’t a team that BC should fear.

And how can BC realistically worry about Providence? Just take a look at the last time the two teams played. The Eagles crushed Nick Ellis for five goals on 18 shots in the Friday game, forcing him to the bench in a 7-3 win at Kelley Rink. On Saturday, the Friars appeared to return the favor by getting out to a 4-1 lead at Schneider Arena. But the Eagles stormed back, scoring the final three goals to earn a hard-fought tie on the road against the then-No. 3 team in the nation. And lest we forget that it was Ian Milosz in goal for the first two games of his collegiate career, not Demko.

That leaves North Dakota and St. Cloud State. But neither has all of the benefits that BC does.

St. Cloud State’s Charlie Lindgren can’t match up to Demko and NoDak’s Cam Johnson in between the pipes. The latter two are second and third in goals against average and save percentage, respectively, while Lindgren is in the middle of the pack. And Demko has proven he can control a game better than anyone else—his nine shutouts lead the nation.

And no team can match the depth of BC. If healthy—and that’s a big if, with Colin White and Chris Calnan nursing injuries—no team has the scoring capability across four lines quite like BC. Providence might come close, but it lacks what BC has plenty of: star power. White, Miles Wood, Alex Tuch, and Zach Sanford all profile as future NHL heavyweights. And each can take over a game with ease on any given night.

Oh, and Jerry York. I don’t really need to explain that one.

Not convinced? Well, take a look at the three places BC will end up in the playoffs.

The Eagles will either play their regional in Worcester, Mass. or Albany, N.Y. If they make it through there, BC will advance to the Frozen Four in Tampa, Fla. At Worcester’s DCU Center, the Eagles have a 12-1 all-time record. Meanwhile, BC has won national championships at the Times Union Center and Tampa Bay Times Forum.

If that’s not luck you can get behind, I don’t know what is.