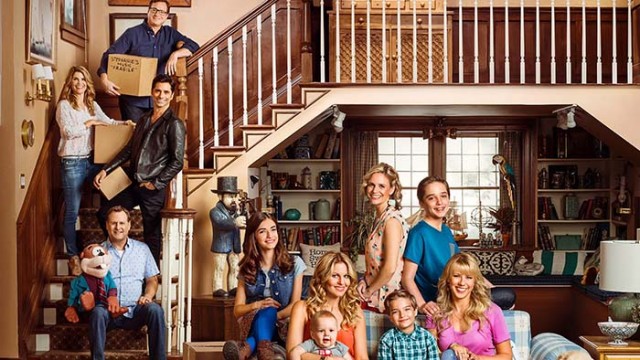 Well, I’ll have to change my name now. Don’t get the wrong idea. I didn’t kill anyone or rob any local banks. In fact, I’m changing my name because of something I’m not personally involved with at all. With Netflix’s Fuller House available to the public, I can no longer carry on the great name Fuller without a serious sense of shame. Comparing this blasphemous sequel to the epic ’90s sitcom, Fuller House looks like garbage-bin graffiti, while the cheesy yet adorable Full House now seems like it came straight out of Masterpiece Theater.

It’s a sad thing to say that the best things to come out of Fuller House are the Carly Rae Jepsen cover of Full House’s theme song and knowing that Jodie Sweetin recovered rather well from her crack addiction. This might all sound overly critical, but when you get just a whiff of the pile of trash that is Fuller House, you’ll understand where this hatred is coming from.

Fuller House is Full House. It does nothing to show that it’s its own piece of art with unique messages for an audience or concepts at play. Each plotline of the 13-episode season has been virtually lifted out of Full House and placed into Fuller House. Fuller House’s creators and writers, on the other hand, checked the compassion that exuded from Full House at the door when they came together to make the show. Instead, they brought along social media and Donald Trump references, forcing characters that fans knew and loved to appear as overdone caricatures of their former selves, shoved into an era that no one ever wanted to see them in.

In this farce of a show, D.J. Tanner moves back to her dad’s house with her kids in the wake of her firefighter husband’s death. Stephanie Tanner is now a world-famous DJ (aptly calling herself DJ Tanner) and Michelle is running her fashion empire in New York. This last point is delivered to the audience in a horrendous moment of self-indulgence. Danny Tanner tells Stephanie where Michelle is, then the entire cast turns to look directly in the camera for about 10-15 seconds. These pitiful seconds are the quintessence of Fuller House—a self-serving reminder to the rest of the world that Full House existed and that John Stamos and Lori Loughlin actually look pretty good for 50.

About the only thing Fuller House can do is remember the past. Each episode is laced with around 30 excruciatingly direct references to an episode of Full House. “What should D.J. and Stephanie talk about with these two men they meet at a bar?” the writers asked themselves. “How about that time they put a hole in the wall and tried to hide it from their dad?” Yeah, that’s real attractive, real necessary. About every five minutes you’ll hear Stephanie’s famous “How rude!” or Michelle’s “You’ve got it, dude!” with a vigorously stuck-out thumb. It’s baffling to think about how they did this. Michelle’s not even on the show, and her quote was said more than it probably was in any season of Full House.

If you haven’t turned off Fuller House because of its loathsome references or dreadful child actors, the laugh track is sure to scramble your brain within a couple episodes. Almost every single line is followed by an uproar of laughter from the studio audience (if there actually was one). This over-forced laugh track kills the few zingers that are actually sort of funny. It would be the quest of a lifetime to find someone that actually laughed at one of D.J.’s oldest boy’s quips, let alone literally everything he says.

To put it bluntly, Fuller House is terrible. It actually went so far as to produce the opposite effect of what it was going for. It wanted to remind people how much they loved Full House. Instead, it just showed audiences how self-obsessed these actors are. It brought out and emphasized the bad qualities of its predecessor, bringing nothing new to the table except cell phones and Trump’s candidacy.

If you love, or even just sort of enjoy, Full House, stay away from Fuller House. The house isn’t fuller. It’s pure void.