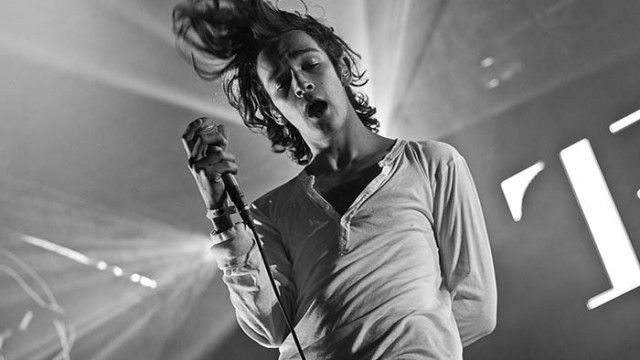 The 1975 Channels the ’80s Through Synth-Pop and Groove

The 1975’s new album has a crazy and stupid title: I Like It When You Sleep, for You Are So Beautiful, Yet So Unaware of It. Two commas, count ’em. Few other album names are complete sentences, and pretty much none are as long.

The band’s 2013 self-titled debut followed four EPs, self-released in 2012-13 after the band spent 10 years—since lead singer Matt Healy was 13—trying and failing to get signed. That first album hit No. 1 in the UK, launching The 1975 to a semi-stardom that inspired much of the new material here. The group spent a couple years touring, soaking in a new fandom that seems to both inspire and terrify Healy. Then it took the spring of 2015 off to record in LA, and here’s the result, nearly a year later.

In theory, this band should be annoying. Healy seems like kind of an uber-narcissist, the type of guy who uses tons of big words in interviews. He’s the kind of artist who thinks his music is a gift. Sometimes he refers to The 1975 as “I,” dissing-but-not-really his bandmates George Daniel, Adam Hann, and Ross MacDonald. Every show, he strolls onstage with a bottle or glass of wine, visibly drunk, maybe high, too. It’s possible he wants everybody to think he’s being ironic: “Yeah, they know I’m just messing with them!” A recent profile in British music mag NME seemed to take his word for it, arguing that he’s acutely aware of his flamboyance and absurdity. This could be true, but it’s hard to buy completely—he literally said that he thinks the world “needs this album.” Ironic or not, he is super into himself.

Nevertheless, it’s also true that Healy is a seriously gifted frontman, talented but magnetic, transparent, and erudite, too. He’s a lyricist in conversation and in his songs, and though some of his answers meander, he is often frighteningly thoughtful, spending lots of interview time poking fun at fame and questioning his fans’ craziness—“I don’t have a 1975 tattoo, and I am The 1975.” That sort of thing.

And there’s also this: The 1975 is probably the future’s biggest band.

Sleep opens up with “The 1975,” just like the first album. At first it seems like the band might’ve just slapped the same song on this second album, but then it switches it up and comes out hard with a gospel choir. Clearly a big shift from the emo, moody vibe on the first record.

The build-up to this album was all about how Healy was channeling the ’80s by putting together a big lineup of synth-pop jams, and that was more or less correct. There’s ridiculous groove—“UGH!,” “She’s American”—and some stripped-down R&B noir featuring a clarinet and some harp, straight off a remixed jazz-gospel album, on “If I Believe You.” “A Change of Heart,” one of the best songs on this album, is basically the love child of Berlin’s “Take My Breath Away” and Genesis’ “Throwing It All Away,” both from 1986, with its earworm backtrack and sad-ish topic. But the line “Your eyes were full of regret / As you took a picture of your salad and put it on the Internet” probably could’ve used a re-write.

A couple weeks ago on Zane Lowe’s Beats 1 radio show, Healy said one of the things he loves about this album is all the references to the band’s earlier work planted in it are little nuggets for longtime fans: “She’s American” starts with almost the same guitar riff as “Settle Down,” the album opens with the same lyrics, if a different sound, on “The 1975,” and “Lostmyhead” is a clear sequel to “Facedown,” a breathy, ethereal affair off of an early EP that’s been turned into a pop/rock fusion with some white noise.

There are also back-to-back tracks, “The Sound” and “This Must Be My Dream,” that are aggressively radio-friendly. “The Sound” is backed by a children’s choir and a bananas-predictable ’90s Euro dance-pop piano riff that sounds like it was stapled onto the final track. But it’s still fair, even if the band’s performance of it on SNL a couple weeks ago was horrifying and possible-fan-repellant. Back to the uber-narcissism again, as Healy, makeup-clad, shirtless, was more or less mental. “This Must Be My Dream” is way better, a sparkly but low-key jam that finally features the Big Sexy Sax Solo everybody expected. Oh damn, so sexy.

But even that is middle-of-the-road material here. Lots of good car radio songs dot the beginning, and then “If I Believe You” to “The Ballad of Me and My Brain” is an 18-minute lull, largely too moody and slow or too noisy and fast to be listenable. But when you arrive at “Somebody Else,” that seems almost intentional, like the band had to be straightforward at first and then slow things down a little before it dropped a bomb. “Somebody Else” is the pinnacle of the record, a smash, a synth-pop masterpiece exhibiting groove, feeling, and thoughtfulness. It’s gorgeous, it’s smart, it’s new.

After that, the mood shifts. The subject matter is still dark—drugs, sex, break ups, depression—but excluding “The Sound,” which is out of place, the aura is stunning. The title track on Sleep is a six-and-a-half-minute lullaby, beautiful, symphonic, imminently approachable, instrumental. And it ends as the first album did, with something completely different, the stripped acoustic “She Lays Down,” just Healy and his guitar. It seems like it was done in one take. “And that was it,” he says at the end. Fade out.