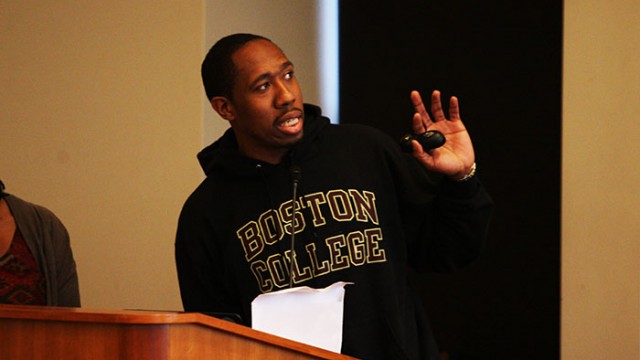 Previously, Introduction to African Diaspora Studies could only be counted toward the core when cross-referenced with sociology.

Martin Summers, director of the AADS program, sent a letter to AADS minors alerting them of the change in the department and also announced the addition of new courses for the 2016-17 academic year.

The announcement, he said in his letter, comes right after the town hall meeting that the Undergraduate Government of Boston College’s AHANA Leadership Council (ALC) held last week, where students discussed ways in which BC could be a more inclusive campus. Much of the discussion at the event revolved around how academics could be improved, including how to make the core curriculum less Eurocentric.

Afua Laast, UGBC vice president of racial diversity and inclusion and LSOE ’16, and James Kale, chair of ALC and LSOE ’16, ran the meeting last week. They discussed the need for a stronger cultural diversity core and more hybrid courses in order to integrate diversity into classroom discussions.

“It’s really important not to just clap diversity into things,” Laast said at the meeting.

African Diaspora in the World I and II will most likely be taught in regular rotation, Summers said in the letter, meaning that they will be taught every other year.

“For several years, if not decades, Boston College undergraduates have been rightfully complaining about the Eurocentric nature of the university core, the paucity of core courses that speak to the cultures and experiences of people of color, and the confinement of those courses that do exist within a watered-down cultural diversity core,” Summers said in the letter.

“I hope that this effort will make it easier for the class of 2020 and beyond.”

AADS is not yet a major. Summers said that in order for it to become a major, more faculty need to lead the initiative and more students need to apply for an independent major in AADS.

“We have not yet decided if we want to push to become a major,” he said in the letter. “But there has to be a lot of internal discussion and self-evaluation of our resources and curriculum before we can come to a conclusion.”

UGBC released a report in January 2015 requesting that the administration work to expand diversity and inclusion efforts on campus. Part of the report concentrated on increasing the number of hybrid courses, like those that began in the 2014-15 school year, and revising the core curriculum to include courses that pertain to marginalized cultures.

As of January of this year, the administration had not yet addressed the plan of action’s requests to increase diversity efforts.

UGBC had been working with Vice President of Student Affairs Barbara Jones and Dean of Students Thomas Mogan to create a proposal to remedy some of the students’ concerns outlined in UGBC’s plan.

“I hope that this effort will make it easier for the class of 2020 and beyond,” Summers said in his letter.