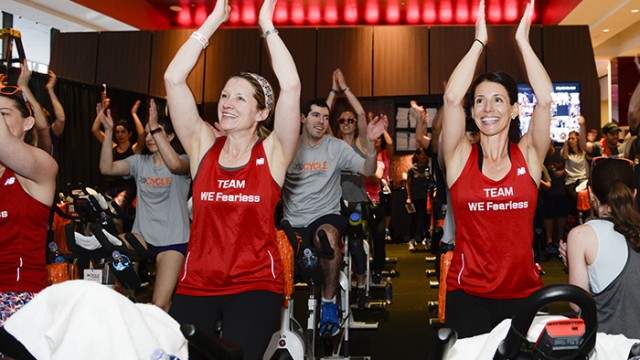 Although Lisa passed away in December of 2012, her fight against rare cancers can still be heard in the booming bass and shouting Equinox instructors during every Cycle for Survival event.

Cycle for Survival, the Boston Area, and BC met through Lisa’s efforts to raise awareness, and funds, for rare cancer research.

This year over 1,200 riders participated in the event, riding to upbeat, lively music, while an Equinox instructor boomed with encouragement in their ears.

Jennifer Linn was diagnosed with sarcoma, in 2004.

Recognizing that rare cancers were understudied and that research initiatives were underfunded, Jennifer and her husband Dave Linn founded Cycle for Survival, an indoor cycling event based in New York in 2007 with the purpose of fundraising for research on rare cancers.

Cycle for Survival is an indoor team cycling event, annually hosted in more than 15 cities across the nation.

It became part of Memorial Sloan Kettering Cancer Center (MSKCC) in 2009, one of the top cancer hospitals in the nation, according to U.S. News & World Report.

Every dollar raised by Cycle for Survival goes to MSKCC to fund rare cancer research.

Thus far, Cycle for Survival has raised over $81 million, which has funded over 100 clinical trials and research studies.

It is set to surpass $100 million in donations by April of this year.

New Balance now sponsors the event, and Equinox, which is the founding partner of Cycle for Survival, provides instructors who lead the cyclers during each year’s events.

Throughout her 14-month illness, Gallup continued to work full-time at New York Presbyterian Hospital, ran a half marathon, finished a triathlon, received her master’s degree from NYU, heard about Cycle for Survival, and wanted to get involved.

“[Lisa] started receiving treatment at MSK, and that’s how she learned about Cycle for Survival,” Barry Gallup, Jr., Lisa’s brother, said. “At the time it wasn’t in Boston, but she had a lot of family and friends in Boston, so she wanted to bring the effort to Boston. She really spearheaded it. She got to know the founder, Dave Linn, really well, and they worked together on it.”

FabuLisa, the Gallup’s team, raised over $83,000 this year, with its total amount raised during the past four years amounting close to $400,000. For the fourth year in a row, FabuLisa has been the top fundraising team in Boston.

Starting in 2013, the BC community has done its own event with the athletic department. According to Gallup, Sr., the BC event has raised close to $10,000 each year.

“You know they talk about two things, ‘Ever to Excel’ but more importantly ‘Men and Women for Others,’” Gallup, Sr., said. “To see anywhere between 600 to 700 student athletes wearing the team FabuLisa shirt, it just means a lot to us. Throughout the year, we’ll see students wearing the shirt on campus and it just really means a lot.

It really tells a lot about Cycle for Survival, about Lisa, but it’s not just about Lisa, and it’s really about the Boston College community rallying behind her.”

So far, in 2016, Cycle for Survival has raised over $21 million for MSKCC to fund more research and clinical trials on rare cancers. They hope to surpass this figure in the coming years.

“It’s a very emotional night, but it’s a good night. It’s an emotion of love and passion and helping other people,” Gallup, Sr., said. “We’re not here to feel sorry for ourselves, we are here to do what’s right and help the cancer cause.”

Featured Image by Cycle for Survival

barry gallup
With Integrity, the Marathon Movie Could be Made Right
How Do You Think BC Athletics is Doing This Year?