Home » How Do You Think BC Athletics is Doing This Year?
Football, Men's Basketball, Column

How Do You Think BC Athletics is Doing This Year?

Are you an optimist or a pessimist? Let’s put it to the test with a simple question:

“How are Boston College’s sports teams doing this year?”

It’s a straightforward query, but given the current two-faced nature of BC Athletics, the answer can be tricky.

If your mind first darted to the men’s and women’s hockey teams—both of which may be favorites for the national title—you’re an optimist. If you immediately thought of the football and men’s basketball programs—squads on a collision course to become the first Power Five duo to go winless in conference play since Georgia in 1943-44—then you’re a pessimist. If you instinctively remembered the men’s soccer team’s improbable Elite Eight run in the NCAA Tournament, well, you’re an outlier who belongs (with me) in Europe.

Interestingly, though, research suggests that optimism and pessimism aren’t fixed, black-and-white mindsets. We’re not Olaf or Eeyore. Rather, we pick and choose our attitudes depending on the situation to help accomplish our goals. Optimism can shield from apprehension, and pessimism can prevent disappointment. College applicants might develop a pessimistic attitude toward their dream schools to avoid heartbreak if they don’t get in. Likewise, a budding entrepreneur must adopt an optimistic approach despite the fact that most new businesses fail in the first five years.

This is nothing new in the sports world, where different ways of thinking can jumpstart careers or promptly end them. The consequences of optimism and pessimism extend all the way to coaches, general managers, and, yes, even athletic directors. It’s easy to trust a group like Katie Crowley’s undefeated women or Jerry York’s No. 3 Eagles when the forecast is nothing but clear, blue skies ahead. But in the case of a struggling team—like Steve Addazio’s three-and-out specialists or Jim Christian’s sorry spectacle—what’s the best course of action?

Perhaps the more appropriate question is: Should we be optimistic or pessimistic about BC football and men’s basketball?

This answer isn’t just tricky—it molds how we view a rebuilding team, whether we give coaches second chances or axes, whether we trust the process or respond to results, whether we tolerate losing or not.

Recently, the reaction in the sports sphere has been one of bleak negativity toward underperforming teams, with head coaches kept on shorter leashes than ever. In the last four years, 22 NFL organizations have replaced head coaches, and 11 of those have done so at least twice. One study by the University of Colorado examined the effect of replacing coaches after losing seasons and found that the transition actually hurt mid-level teams while producing no effect on lower-level programs. In an age marked by offensive impatience with losing, former Colorado head football coach Dan Hawkins said it best:

“We’re in the era of PlayStation. If you don’t like it, just hit reset.”

That’s not to say an optimistic approach is always right, either. A few more years of blind confidence in the Eagles will only leave you whistling “Three Little Birds” in an empty Conte Forum during yet another losing season. And believe me, sound travels well when your attendance can’t crack four digits.

Skepticism and doubt can be effective, especially the brand termed by researchers as “defensive pessimism,” or caution after success. When everything’s going right and the trophy’s been won—the moment in which it might be most counterintuitive to practice pessimism—that is the time to pull back the reins. Imagining all the possible mistakes in the future actually acts as a firewall against future missteps.

But it’s hard to employ this thinking at BC, where the most recent success in football and basketball is a decade in the rearview.

On the hardcourt, the Eagles’ last glimpse of relevancy was under former head coach Al Skinner, who brought them to the national stage and smoothly transitioned BC into the ACC in the mid 2000s. The 2001 National Coach of the Year attracted hard-working recruits who, despite not earning All-American accolades out of high school, transformed the program into a national powerhouse.

Nonetheless, BC reached the pinnacle of pessimistic strategy when it fired Skinner in 2010 after he posted a 6-10 record in conference play—just a year after he coached the team to a No. 7 seed in March Madness.

Boy, what this year’s winless Eagles would do for six ACC victories now.

There’s no band-aid solution. The crux of the matter is recruiting players to a university with high academic standards and facilities that are still playing catch-up with the rest of the ACC. But there’s hope: Addazio’s current freshman and sophomore classes are encouraging, and his Eagles would have almost certainly won a conference game had their roster not been decimated by injuries last year. By the same token, Christian brought in the program’s first-ever Rivals 150 recruit in A.J. Turner and, coupled with Jerome Robinson, pieced together a solid freshman class to complement the team’s senior leaders. If the pair hadn’t been injured for BC’s Feb. 9 meeting with No. 9 University of North Carolina, Christian would have toppled the Tar Heels in a dramatic upset.

The best way might be to stick with it. Just ask Frank Beamer, who took over at Virginia Tech in 1987 and guided the football team to a dismal 2-9 record. By 1992, the Hokies hadn’t improved much: at 2-8-1, their showing officially placed Beamer on the hot seat. But Tech maintained faith, opting for optimism in the face of consecutive losing seasons. Twenty-three seasons and 23 bowl appearances later, Beamer retired as one of the top coaches in college football history.

It’s hard to think positively when your two major profit sports teams haven’t won a conference game in nearly a calendar year (Mar. 7, 2015, to be exact). But it’s now, more than ever, that BC fans and administrators must assume an outlook of optimism. Canning a coach won’t solve a problem that’s much deeper than just who is calling the plays. It’s time, reluctantly, to hold our noses and trust the process. 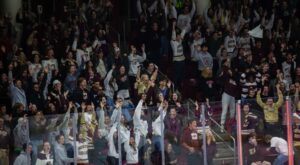