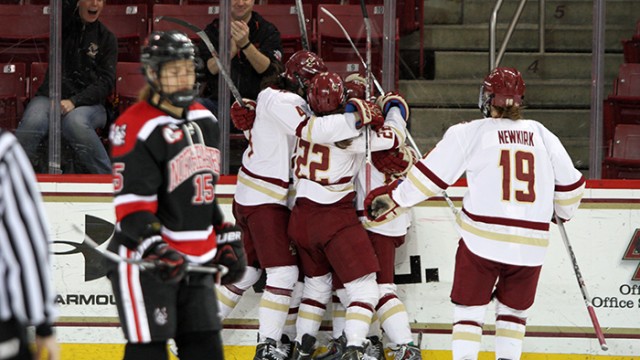 Kendall Coyne had just settled down from the emotion of playing her final game in college for Northeastern women’s hockey. The superstar forward will walk away from the game on the Top 10 all-time scoring list in NCAA history with 141 goals and 249 points following a 5-1 loss to Boston College in the national quarterfinal. In the postgame press conference, Coyne praised her time in Boston and how much she has enjoyed bringing pride back to Matthews Arena. She despondently understood that only one team gets to end its season with a meaningful win. Coyne also lauded the future of this program, which will feature a battle-tested, young goaltender in Brittany Bugalski and several underclassmen, including Coyne’s sister, Bailey, a Class of 2020 recruit.

But when talk went back to her head coach, Dave Flint, and her team as a family, Coyne broke down again.

“He treats us as people and not as hockey players,” Coyne said. “That’s the one thing that has gotten me going for the last five years, knowing I have him when my family is back home in Chicago.”

But while Coyne and the Huskies (28-9-1) lamented the loss, BC celebrated. With the win, head coach Katie Crowley’s squad will be heading to the sixth Frozen Four in program history, and the fourth in the last five years. This, of course, keeps a perfect season alive for the Eagles (39-0-0) as they will play Clarkson on Friday evening at the Whittemore Center Arena in Durham, N.H.

As they always do, the Eagles came out firing right from the beginning. A mere 50 seconds into the game, defending Patty Kazmaier Award winner Alex Carpenter put up a slam on Bugalski. Megan Keller, the nation’s leading scorer among defensemen, gave a good screen, allowing Carpenter’s shot to give the Eagles the early 1-0 lead.

Not long after, BC doubled its lead by showing the incredible depth that has made Crowley’s team so successful all year. Northeastern struggled to contain Keller, who fed it over to Haley Skarupa. She sent in a booming shot on Bugalski, who left up a juicy rebound for Tori Sullivan to put home. Once again, the BC third line proved why the team has been the one to beat.

“They’ve sparked our team when we were a little flat,” Crowley said. “They give us energy, they’re fast, they’re quick, and they play the game the right way.”

The second saw the Eagles get an early advantage, as they benefited from a Paige Savage tripping penalty from the first frame. They nearly tacked on another when Carpenter received a feed from Keller between the circles. She slammed it past Bugalski, but the zebras conferred to call offsides on Keller.

It was the kind of play that could shift the momentum back in Northeastern’s favor. But the Eagles didn’t let off the pedal, and wouldn’t be denied their sixth victory over their crosstown rivals in as many games.

Skarupa gave BC that third goal after rocketing in a feed from Carpenter—for Carpenter, the assist was the 275th point in her illustrious career. She was helped out by a Kenzie Kent screen that blocked Bugalski just enough to help the puck slide past her left skate.

In the third, BC kept the pressure on Bugalski, especially along that third line. Sullivan drove home another big rebound off Bugalski’s pad, taking advantage of an initial shot by Meghan Grieves. And, despite nearly successive penalties that kept the Eagles playing down a skater throughout the period, the kill stood strong. Goaltender Katie Burt had a hand in that, turning away the first 21 shots in her direction. Though that total is still less than what BC’s two looming opponents—Wisconsin and Minnesota—put up, Burt’s head coach isn’t worried.

“Burt gets tested quite a bit in practice,” Crowley said. “She’s mentally more focused this year compared to last year.”

By the time Carpenter rocked an empty-net goal with under three minutes to go, virtually all that remained was the shaking of hands and the playing of BC’s alma mater.

But, as they’ve done all season, and as she has done her whole career, Coyne and the Huskies kept fighting. The forward took advantage of a late Kaliya Johnson penalty, using her outstanding speed to race down the ice to slot the puck past Burt’s right shoulder. It was the 50th goal of the season for Coyne, but merely a consolation prize for what she has done all season, and for her whole career. For now, she’s excited to see how the Huskies will keep strong the culture she has worked hard to build.

“I’m excited to watch from a distance, but hopefully I’m not too far away,” Coyne said. “It was an honor to play another week of hockey. I hope they push to play another one next year.”

After the game, Keller, the player tagged with guarding Coyne, had nothing but good things to say for the women’s hockey legend, who will represent Team USA at the World Championships and was drafted No. 2 overall by the NWHL’s Boston Pride.

“She’s the one that you kind of have to look out for,” Keller said. “With her speed, you have to stay with her, always have an eye out for her, and stay in it.”

For Coyne and Flint, their final press conference together provided several heartfelt moments. The head coach commended his star for helping make Northeastern a winner again. With her leadership, Coyne helped Northeastern to its best season in program history, its first NCAA Tournament berth, all while setting team records in goals, assists, and points. Flint recalled recruiting Coyne, believing his hands-off approach and the appeal of Boston—and not, as he sheepishly admitted, his personality—helped attract her to the school. And he believes, thanks to her, that there is bright future on the horizon for Northeastern women’s hockey.

“She could’ve gone anywhere,” Flint said. “Thankfully for me, and Northeastern, she chose us.”

But in the end, it’s the Eagles that will advance. And, in Flint’s opinion, every other team better watch out.

“I haven’t seen an NCAA team as good as they are,” Flint said.