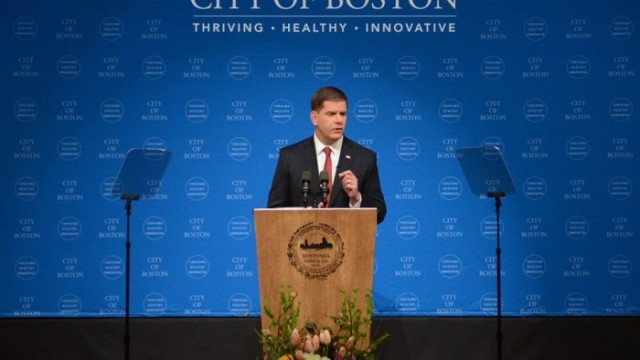 Last week, an event held by General Electric to discuss its upcoming move to Boston was met with stark opposition from individuals in the city who believe the move will be detrimental to the City. During the event, Boston Mayor Martin J. Walsh, WCAS ’09, discussed and supported the possibility of raising the minimum wage to $15 per hour statewide.

“When you look at the disparities, and income inequality, and what’s happening, I think it’s important for us to work on the issue,” Walsh told The Boston Globe. “And the way we work on the issue is by increasing the minimum wage over a period of time.”

The discussion about raising the minimum wage in the state is not a new one, with former Governor Deval Patrick previously approving a minimum wage increase to $10 per hour in 2014. At the time, Massachusetts was the only state with a minimum wage that high—it was later joined by California and New York.

Thus the question is whether the state needs the change and whether it would be fiscally responsible to do so, taking into account that to afford the higher wages, companies would have to either see an increase in revenue or lay off some employees.

Unions across the state have applauded the proposal, citing the need for a living wage for all individuals.

Critics of the proposal have come mostly from business groups who are concerned with the costs of such a measure.

Chris Geehern, executive vice president at the Associated Industries of Massachusetts, did not agree with raising the minimum wage again, he said to The Boston Globe, as employers across the state are still digesting the Patrick wage increases, which made the minimum $10 per hour in 2016 and will increase again to $11 next year.

The city is currently experiencing a boom in the startup scene, and to continue to be an attractive spot for these sprouting companies, it needs to provide an environment where business can prosper. For employees, this would provide a great incentive to work in the state. But the opposite is true for employers who would have to raise prices or lay off workers to meet the new wage floor, were it to come into effect.

College students, however, would benefit from the increase. It would provide a heftier source of income to help many not only pay their bills, but also put a greater dent into their tuition payments and, in turn, reduce their debt, especially as the process to repay loans remains confusing.

Leaders in the state, include Governor Charlie Baker, will have to look holistically at the effects that such a proposal would have, especially since the wage is still set to increase again at the end of the year.

Yes, having higher wages would only benefit those receiving those wages, but not if those wages are not going to a large enough group of people. The state and the city have to ensure that economic conditions exist so that the largest amount of individuals can benefit and prosper. It might be in the best interest of the statewide economic climate to wait for the economy to digest the current wage increases and adjust accordingly before making decisions about future spikes in the wage.

Politicians are often guilty of making rash economic decisions without having adequate data or because they wish to affect immediate change in the short run, without much thought about the long term, especially in election years such as this one.

We must understand the reasons behind why such a measure would be beneficial and whom it would benefit. In today’s economy, one that is still recovering from the latest recession, the City has seen remarkable progress over the past few years. Boston needs to remains an attractive startup market, and now with GE’s move into the city, it would be imprudent to shift the economic conditions without first seeing how all of the current, moving parts fit together.

marty walsh GE
Stopped Dead: Plaid Sneakers and the Importance of Subtlety
Previewing BC Hockey: What to Expect in the Frozen Four