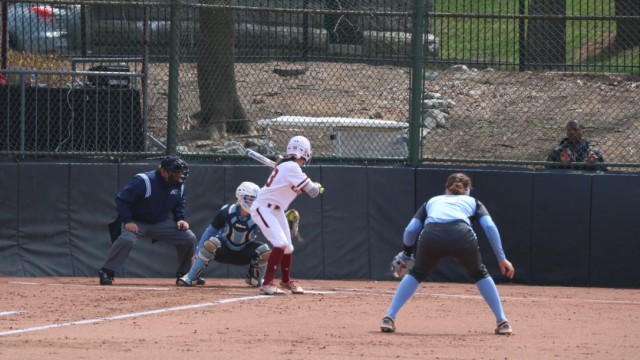 The bases were loaded with one out in the bottom of the third inning, and Annie Murphy stepped to the plate. Murphy laced a hit up the middle, driving in two runs and giving Boston College softball a 3-2 lead. The Eagles never looked back.

Both offenses started strong and faded as the game went on. In the first inning, North Carolina second baseman Taylor Wike ripped a triple down the first-base line with one out, but the Tar Heels could not seize the opportunity to get on the board first. In the bottom half of the inning, the Eagles made them pay. Murphy drove in the first of her four RBIs with runners on first and third after sending a hard ground ball up the middle.

Frei struggled mightily with control in her second and final inning for the Eagles. The Tar Heels managed to score two runs to take the lead, despite failing to record a single hit after Frei surrendered four walks and hit one batter. Fortunately for BC, the final batter of the inning put the ball in play directly at right fielder Taylor Coroneos.

Jessica Dreswick relieved Frei in the third inning, and she recorded an impressive five scoreless innings. She only registered one strikeout, but trusted her fielders to make plays. The wind was certainly a factor, as fly balls to the outfield were a bit trickier and tailed toward the lines, but the Eagles were prepared. The infielders also excelled, attacking ground balls to avoid bad hops and making quick throws to record outs.

After Murphy gave the Eagles the lead in the bottom of the third inning, sound defense and solid pitching allowed them to keep it. BC scrapped together a couple of insurance runs as the game progressed, as Chloe Sharabba hit a sacrifice fly in the third inning and Murphy hit a sacrifice fly in the fifth inning. The Eagles avoided the sweep with a 5-2 victory. After coming up short in both games of a doubleheader on Saturday, this Sunday afternoon victory was needed.

The second game of Saturday’s doubleheader proved to be heartbreaking for the Eagles. Despite posting eight hits and only allowing three, BC went down 4-3. Frei pitched the entire game for BC while Fuller earned the win, and Lynch came in for the save for the Tar Heels. A key two-run home run opened up the scoring for North Carolina, as Kristen Brown delivered in the third inning. BC tied up the game after Tatiana Cortez hit a solo home run in the fourth inning, but North Carolina responded with two more runs in the fifth. Cortez drove in another run in the fifth inning to cut the lead to one run, but the Eagles failed to send home the game-tying run.

The first game of the doubleheader started off as a pitcher’s duel between North Carolina’s Kendra Lynch and BC’s Dreswick. After three innings, both teams had managed to only earn one hit each. In the bottom of the fourth, however, the Eagles struck first and scored their only two runs of the game. That lead would not hold up, as Dreswick ran out of gas in the sixth inning. Kendra Lynch helped her own cause with a two-run home run, and the Tar Heels took the lead after a throwing error. In the seventh inning, North Carolina added a few insurance runs after a three-run home run by the other pitcher, Fuller. The Tar Heels held on in the bottom of the seventh to win 6-2.

Having a short memory is important in softball, whether it’s forgetting a mistake within a game or forgetting about the previous day’s losses. The Eagles fought hard in the third game of the series and earned a win despite the heartbreaking doubleheader the day before. When Murphy stepped up to the plate in the third inning, she made sure that the Eagles would regain the lead and Dreswick made sure that BC would not give it up down the stretch.