Home » What’s Next for ‘Ranchony,’ the Satirical Presidential Candidates? Not UGBC. 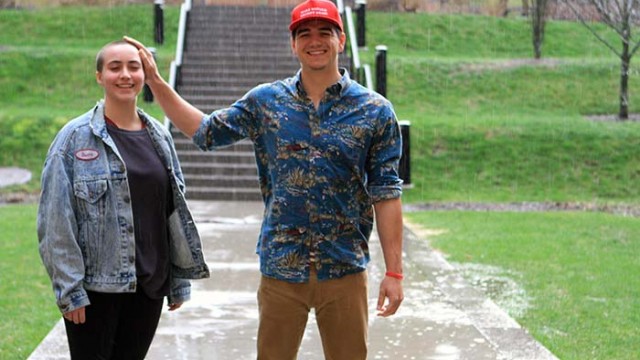 What’s Next for ‘Ranchony,’ the Satirical Presidential Candidates? Not UGBC.

Seven weeks ago, when I first talked to Anthony Perasso, LSOE ’17, and Rachel Loos, MCAS ’18, they showed up to an interview in denim jackets and bright red turtleneck sweaters. Loos sported purple-blue hair. It was a little weird, but also pretty much what I had expected.

So when I talked to them again last week, and Perasso showed up in a “Make Donald Drumpf Again” hat, and Loos, who shaved her head a couple weeks ago, showed up without hair, it was almost too perfect. I hadn’t even remembered to tell them I was bringing a photographer, but there they were, once again striking that delicate balance between “Wait, what?” and “Yeah, that makes sense.”

But this time we were meeting under very different circumstances. Back in late February, Perasso and Loos, editors for The New England Classic, were about to launch a much-discussed, kind-of-satirical, kind-of-serious bid for Undergraduate Government of Boston College (UGBC) president and executive vice president. In their campaign, the team referred to itself as “Ranchony,” an amalgamation of their first names. But right after that initial interview, the other two teams running both dropped out, leaving them alone. Perasso and Loos, fearing that they hadn’t earned the positions, encouraged the Elections Committee to reopen the ballot to other candidates.

The EC listened, and five more teams jumped in. And when the general election results were released on April 1, Russell Simons and Meredith McCaffrey, both MCAS ’17, were announced as next year’s UGBC president and EVP. Not Perasso and Loos.

Actually, they didn’t even make it through the primary.

What happened? They went for transparency and realism, so much so that their only promise was to “Bring Back the Funk.” They made funny videos, which Perasso said got several thousand views each, though he acknowledged those numbers could have been inflated by Facebook’s liberal definition of a view. They even made a Tinder account under the name “Ranchony,” which they said they would use to tell students about their candidacy instead of campaigning in dorms, a common practice among most candidates.

As Loos put it last week, the idea behind using Tinder was “We’re hands-off so that you can keep your hands on.”

They seemed to do everything right, in other words. Students’ disillusionment with UGBC—a theme echoed again and again during the campaign season by teams like John Miotti and Matthew Ulrich, both MCAS ’17—would in theory make a lot of people take Perasso and Loos over more “serious” candidates all day long.

“I’m really bummed that we didn’t make it through the primary,” Loos said. “I really thought we were gonna win.”

That comment looks very different than it sounded. She said it like it would have been cool to be in charge of UGBC, just like it would be cool to go to the beach or to see a good movie. Nice if it happens, but who really cares if it doesn’t? Certainly not Loos.

“I am shocked that this [interest in our campaign] is still going on,” she said. “I’ve been done with this for weeks.”

Part of that stems from how long they spent campaigning—well over a month, after election day was postponed. They got tired. Perasso talked about it the same way.

But they’re still a little disappointed, and a little confused. Perasso said he figured that people would vote for them based on their social media content.

“I would like to formally call out the Elections Committee to release the numbers,” he said, grinning.

Rachel Mills, co-chair of the EC and MCAS ’16, said that the Committee doesn’t release primary election voting data because it wants to avoid establishing a frontrunner. She’s not convinced that that’s the best policy, though, and in the interest of transparency she said she would bring it up as an option for next year. And this year’s results? It seems like Perasso and Loos won’t be seeing those any time soon. But Mills said it was close.

The first time we met, Perasso and Loos were prevented by UGBC election rules from being too specific about policy goals. Starting broadly, Perasso said last week that he viewed their campaign as an interesting attempt to combine satirical style with serious substance. One thing that meant was sending cryptic email comments to The Heights with their thoughts on, for example, the EC’s decision to reopen the ballot.

“Rachel and I feel various feelings about new candidates joining the race,” begins a comment from March 5.

But it turns out that beyond being funny and bringing back the funk, they also had a fairly narrow and concrete goal—increase turnout in the election.

“If you can use satire to increase attention on the thing that isn’t the joke, that’s the ultimate goal, deep, deep down,” Perasso said. “That was my whole thought process.”

“I think oftentimes people feel like they voted in the primary so they don’t have to vote again,” she said.

That’s what Perasso said, too.

Talking about their campaign, Mills said that she thought they brought a fun energy to the competition. She said their mistake was probably not campaigning at dorm hours, which some of the candidates who made it through the primary did extensively. Maybe that hands-off approach wasn’t so attractive, after all.

Mills mentioned that, right around the first time I talked to them, the EC heard rumors that if elected Perasso and Loos would resign immediately. The Committee called them to ask if they planned on serving, and they said they did. Beyond that, Mills said there were no problems with their satirical approach—they followed all the rules, and she even figured they would do well.

On March 30, they posted a video on The New England Classic’s Facebook page. In it, they eat shrimp cocktail and talk about how they faked a run for UGBC president.

“Oops,” Perasso says with a shrug.

“We tried our best to make it through, but you a-holes didn’t vote for us,” Loos says. Perasso sticks his tongue out at the camera.

They decided to run, they say in the video, because UGBC elections are stiff. They wanted to change the atmosphere a bit. Sure, they had all these issues they’d like to see addressed, but they couldn’t get any of it done, they say. Why’s that?

“Because the administration is our dad, and our dad’s a jerk,” Perasso says.

That video confused me. In February, I asked if they were serious. They said they were, just like they told the EC. So I asked again last week.

“We weren’t, then we were, then we weren’t, then we were—kind of,” Loos said. First they got into it to “ruffle some feathers,” Perasso said. Then they realized how much they care about some of the issues UGBC deals with, and they faced some outside pressure like that from the EC, faculty, and other candidates. Joseph Arquillo, LSOE ’17, part of the team with Nikita Patel, CSOM ’17, that placed third, argued back in February that Perasso and Loos should have been unable to run because their campaign was satire.

Then Loos nailed it.

“I think we were getting mad that people thought it was fake, like why can’t it be real?” she said. “And then we realized we don’t really have time for all of this.”

Then why did they put so much time into it, and why did they say they were serious? And why are they a little disappointed? Well, it wasn’t perfect. Running a satirical campaign wasn’t that hard, they said last week. But continuing to joke all the time once they got passionate was. And their pessimism about getting anything done combined with other things coming up—Loos wants to go abroad next year, for example—led them to no longer care about the election. “Done” as Loos said. They’re disappointed that they can’t work on these issues with UGBC, but they’re relieved that they don’t have to.

Besides, they think Simons and McCaffrey will do a better job.

“It seems like Meredith and what’s-his-name are much more qualified,” Loos said.

“Ranchony” was about showing people that UGBC doesn’t have to be so serious. The issues are important to them, but why couldn’t the process be a little fun, too? Before they left for a concert—a Waka Flocka Flame show at the Paradise Rock Club—Perasso and Loos said they hope people keep doing what they did, but maybe do it a little more seriously, a little more focused.

“We wanted to show that anyone can run if they want to,” Perasso said.

Loos smiled and said, “Yeah, even if they shouldn’t.”