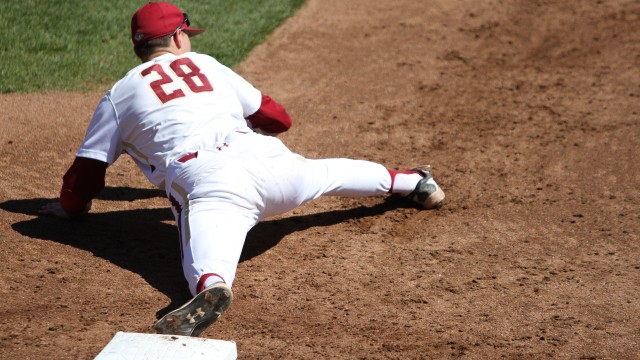 There is a saying that gets tossed around frequently and almost always sarcastically that “it ain’t over ’til it’s over.” Anyone who might have happened to tune in to Boston College baseball’s game against the Harvard Crimson Tuesday afternoon in Cambridge would have probably jokingly muttered the platitude after the top of the third inning upon seeing that the Eagles were up 10-0. To anyone other than the Crimson, this lead may have seemed insurmountable, but despite the double-digit deficit, Harvard (9-18, 2-6 Ivy League) continued to make things happen with the bat and pushed the Eagles (17-11, 5-8 Atlantic Coast) to their limits before BC ultimately won, 11-9.

The Eagles started the afternoon by getting on the board early and often. Sophomore Jake Palomaki opened the scoring for the Eagles after a walk and a stolen base put him in position to be singled home by Michael Strem just two batters into the game. Strem made his presence felt again in the top of the second, when his bases-loaded double tacked on two more runs to make the score 3-0. A fielding error led to the fourth run to cross the plate and the Eagles sat firmly in the driver’s seat at 4-0 at the end of two.

The Eagles exploded in the top of the third as errors and hits kept Eagles on the basepaths and provided Strem the chance to knock in two more RBIs—his fourth and fifth of the day—with a single. Joe Cronin followed Strem by singling in two runs to bring his RBI total to three on the day. After putting up a whopping six-run inning, BC was firmly in control of the game. With a stingy pitching staff who gave up just nine runs over three games to No. 16 Virginia over the weekend, many would believe that the game was well out of reach. But this would not be the case.

Harvard responded swiftly and convincingly, putting up a much-needed five-run frame in the bottom of the third to keep it in the game. All pitchers know the saying “walks kill.” Harvard managed to work out four walks in the inning, and three doubles from the Crimson made them all hurt. With the score now 10-5, the energy began to return to the Harvard dugout and BC began to play nervously.

Strem continued his brilliance at the plate by singling in another run for his career-high sixth RBI of the day in the top of the fourth to push the lead to 11-5, but Harvard would not relent. A leadoff walk in the bottom half of the inning was followed by a double off the bat of senior Mitch Klug, who would himself come in to score on a groundout. Now only ahead by four runs, BC fans everywhere undoubtedly began to writhe in their seats in hopes that their team could find a way to put the Crimson rally to bed.

After scoreless fifth and sixth innings, Harvard add another run in the bottom of the seventh courtesy of freshman Edwin Owolo, cutting the lead to just three. Harvard freshman Patrick Robinson lead off the bottom of the eighth with a walk made it all the way around the diamond to make the score 11-9.

As darkness descended upon the field, BC caught a huge break when the umpires determined that there would not be enough light for the game to continue, ending the game at 11-9 after eight innings of play. With the Crimson bearing down and cutting into their once-massive lead seemingly every inning, it is likely very fortunate for the Eagles that the ninth was forgone.

While BC managed to escape from Cambridge with a win, it was certainly not its best day. After winning a weekend series against ranked conference opponent Virginia, it will certainly leave a sour taste in the mouth of Birdball to have to squeak out a win over lowly crosstown rival Harvard. While the offense performed admirably, scoring in the double digits for just the fifth time this season, the defense will certainly lament three costly errors that all resulted in Harvard runs. The Eagles pitching staff, which has been the team’s most reliable attribute all year, will be disappointed when looking back on the seven walks the surrendered along with the twelve hits to a team who is well below the caliber of other teams they’ve dominated thus far.

While it was not pretty, and certainly not ideal, a win is a win, and Birdball will be more than happy to take it as they continue to put together a successful season for the program.