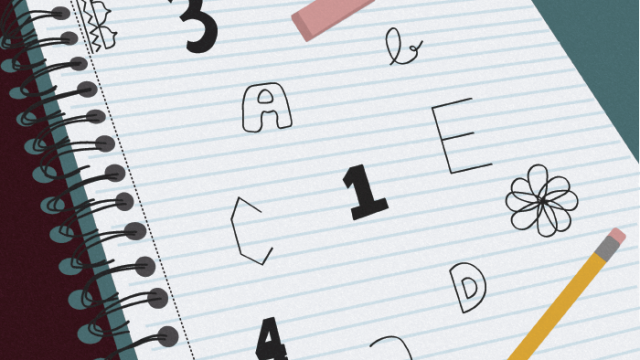 I pass Charlotte a thick black Sharpie so she can move onto her next design. She’s drawn the outline of a flower on a square piece of white cardstock and now she starts filling in the petals with doodles. I’ve sketched my initials in block letters on my own piece of paper. Another patient sits across from us at the table, making zigzags in the middle of a heart with a thin black marker.

We sit under a colorful ceiling made up of tiles painted by children in the art group. Dream catchers woven from yarn and feathers, crafted by other hospital visitors, dangle from the ceiling. We’re sitting in Georgetown Hospital’s outpatient clinic practicing Zentangle, a form of art therapy, which helps calm Charlotte before seeing the doctors. Drawing repetitive patterns relaxes patients and distracts them from the pains of treatment. The only tools needed: pen and paper. Most of the patients in the clinic’s art therapy program are being treated for cancer and blood disorders, or have had a transplant.

My sister Charlotte was diagnosed with a rare form of cancer, acute promyelocytic leukemia, on Halloween of 2014. She was enjoying her senior year of high school when doctors told her she’d never be able to go back to class. Charlotte had blackouts while running on the field hockey turf, and her gums bled every night after she brushed her teeth. My sister hid her symptoms from our family, knowing that if she said anything, she’d have to get a blood test. Her crippling fear of needles kept her quiet for weeks. She had almost died of internal bleeding by the time our mother noticed bruises on her legs and brought her into the hospital.

Charlotte’s serious fear of needles made her the perfect candidate for Zentangle. When doctors first admitted her into the hospital, she refused to move or look at her arm connected to an IV stand by needles and tubes. The art therapists at Georgetown were the first people able to get her to move her arm by having her start a creative project. She made collages and friendship bracelets, but Zentangle quickly became her favorite activity. Practicing the easy-to-follow designs helped to curb her anxiety while waiting to get a shot or a blood transfusion. Zentangle occupied her while the nurses wiped down the injection spot on her skin and prepared the needles. The first few weeks of treatment were a nightmare for my entire family. Charlotte turned out to be allergic to the blood from her transfusions and she suffered from retinoic acid syndrome, a life-threatening side effect of her APL chemotherapy. She couldn’t walk for weeks afterward, so she spent a lot of time doing art therapy in bed.

Art therapy helps not only pediatric patients, but also their siblings and parents, who feel just as upset, stressed, and confused about a cancer diagnosis. The art therapists usually bring extra supplies to patients’ rooms so everyone can be included in the daily project. There are activities for every age group and Zentangle is a type of art for an older group. Art therapy is just as important for six-year-olds as it is for 16-year-olds.

The benefits of Zentangle overlap greatly with the benefits of meditation. Art therapy helps patients and their families feel in-control while most areas of their lives are out of control. Sick children have full power over their drawings, painting, and crafts, helping them forget their feelings of helplessness associated with their fragile bodies. Most art therapy activities emphasize some element of repetition, which relaxes the mind and puts the patient in a state of meditation. The hospital’s bright lights, rooms with crying and screaming children, beeping machines, and constant conversations between the nurses and doctors create an incredibly stressful environment. Art therapy gives these children something new and fun to focus on while in a hectic setting. They feel accomplished and proud after creating a piece of art, leading to feelings of confidence and increased self-esteem and happiness. The hope is that these children will use Zentangle to deal with stress even while outside of the hospital.

Zentangle helps participants learn how to deal with mistakes. By using pen, patients and their family members can’t erase anything. The goal is to move on and keep drawing even if the design isn’t perfect. Hospital life is unpredictable and Zentangle helps patients practice calmness when something unexpected arises, which could be a drawing mistake or something like a neutropenic fever.

Charlotte liked Zentangle immediately. She now uses it before having her chest port accessed to feed medicine into her bloodstream, because it distracts her from her fear of needles. When she was first admitted, she struggled when nurses drew her blood or switched IV needles, which happened every day, and sometimes every hour.

My entire family now enjoys drawing Zentangle patterns. I like to doodle during plane rides or when I feel stressed during finals week because it helps me clear my head. I didn’t know the continued benefits of practicing Zentangle outside of the hospital setting until I brought an official Zentangle book to school with me.

Charlotte plans to bring a Zentangle sketchpad with her to college next year and will use other pieces of art she’s created this year as dorm room decorations. The practice of Zentangle is not restricted to the hospital setting. All types of people across the world can reap the benefits of art therapy exercises.

health art therapy zentangle cancer
Saving the Original BC
Drake’s “Pop Style” Mellows Out, Tegan and Sara Go for the “Boyfriend,” and More In Singles This Week 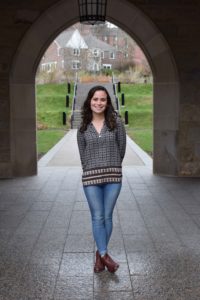