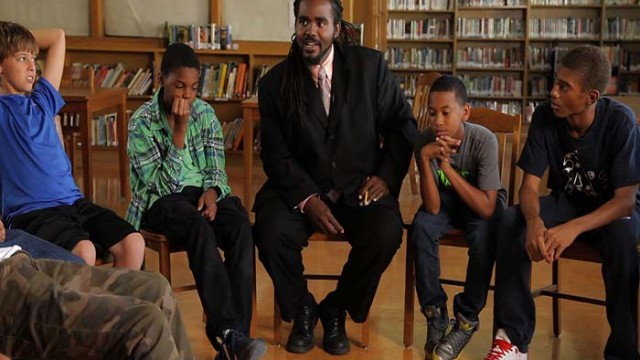 In today’s society, gender roles are often contested. People constantly question what it means to be a man or a woman and how to handle sexuality personally and openly. Especially in the last few years, there has been a motion in American society to move past gender stereotypes that have permeated the very different cultures that culminate in the American experience. Whether black or white, Asian or Latino, everyone is susceptible to both the good and the bad influences of gender roles in society.

This Monday, Boston College’s REACT to FILM club screened The Mask You Live In, a documentary from Miss Representation director Jennifer Siebel Newsom. The film aims to examine the many facets of American culture that promote, sustain, and emblemize male gender stereotypes that have taken root over the last few generations. Blending several personal narratives describing the struggle of living in a society that promotes aggression as a key factor in manhood with statistics, The Mask You Live In was poignant in its message and emotionally striking.

The most commendable quality of The Mask You Live In is the broad spectrum of figures interviewed for the film. Everyone from high school football coaches, parents, and students to psychologists, neurologists, and sociologists discussed the many forms that distorted masculinity takes on in American society. Whether they were experts in the “boys’ vs. girls experience” on a preschool playground, the teen drug culture, or male portrayals in the media, The Mask You Live In offered an eclectic group of analysts that offered well-developed insights into the causes and effects of many aspects of the masculinity problem in modern culture.

Some of the film’s darker moments highlighted an urgent need to quell aggressive manifestations of masculinity. A newsreel of national stories involving mass shootings and murders, even in the midst of such a sobering film, increased the tenseness of the atmosphere in Fulton 511. Some of the multitude of statistics that the film cut to left the room in an uncomfortable silence.

Amid the broader conversations that the film was trying to have, the many personal stories interspersed throughout The Mask You Live In kept the documentary personal and engaging. Teachers explain the programs that they had brought about at their schools to challenge the macho personality that they feel their students force in order to avoid discussing their emotions or feeling emasculated. Parents who grew up without fathers describe what they are doing to encourage their young children to express their feelings healthily and how they are learning from their kids what boys could be like without a debilitating masculinity complex. Kids discussed the hierarchy of boys’ groups in elementary schools and the consequences of trying to break away from the masculine norms. These testimonies added a more accessible component to the film and kept the audience invested in the statistic-heavy, informative documentary.

After the film, REACT to FILM invited Brett Ingram, who teaches a course on masculinity for the communications department, to comment on and begin a discussion on the film, masculinity at BC, and what he can do to make men feel more comfortable outside of masculine bounds.

“I don’t know what I’m supposed to do,” Ingram said, pacing back and forth at the front of the classroom. “I don’t know if taking a pledge is going to stop anything on a Saturday night at 11 at some party, which is where a change would actually matter.”

Ingram is referencing the film’s solution to many of the problems that it covered. Besides taking personal efforts to discuss and push away from aggressive masculinity, the filmmakers asked viewers to take a pledge at therepresentationproject.org, which states, “I pledge to use my voice to challenge society’s limiting representations of gender.” Ingram went on to say that he thought a lot of the movie’s message, which he says has appeared in many different, yet very similar documentaries over the years, works well for certain demographics.

“You can use that with elementary school kids, middle school kids, and even in high schools to a degree,” Ingram said. “But I don’t really see how this type of message works for colleges.”

Students from the audience then offered a few points to the room on where they had seen representations of aggressive masculinity on campus, though no one really offered any solutions to the problem that Ingram had proposed. In the end, Ingram answered his own question to a degree, saying that he felt the best way to stamp out the issue with young men and adults is to saturate masculinity with sarcasm.

“Making this over-masculine front something funny, something to laugh at can go a long way in disarming it,” Ingram said.

the mask you live in
Drake’s “Pop Style” Mellows Out, Tegan and Sara Go for the “Boyfriend,” and More In Singles This Week
‘In the Closet’ Raises Awareness for Sexual Abuse