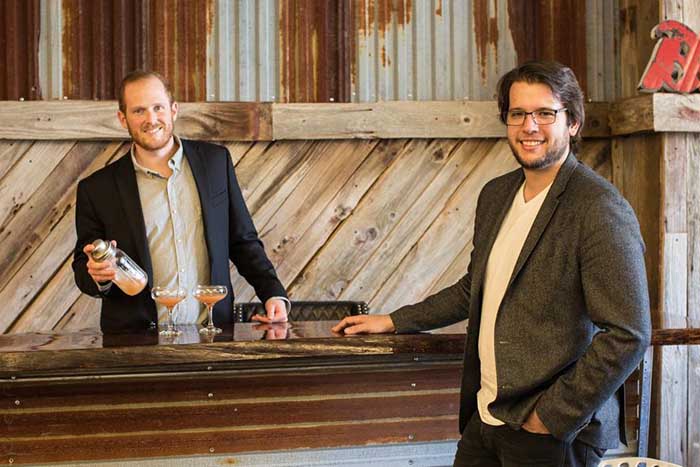 Drizly, an on-demand alcohol delivery service, began in 2012 when Nick Rellas, BC ’13, and Justin Robinson, BC ’11, wondered why they could not get beer delivered to their dorm when people seemed to have access to nearly every other product through technology.

Drizly officially launched in Boston in 2013 and now delivers to 19 major cities across the U.S. and Canada and on April 14, Drizly launched in its 20th city—Portland, Maine. The company hopes to be the best place to buy alcohol, which means having the best prices on the largest selection of products across the Internet. To do that, Drizly looks to continue to grow the team, the network of stores, and the service itself.

Their curiosity quickly evolved into a fascination with why technology has not been able to tap into regulated industries like alcohol.

Even before he transferred to Boston College from the Rochester Institute of Technology, Rellas, the current CEO of Drizly, had reached out to John Gallaugher, an information systems professor, and showed interest in creating value with a business perspective. Gallaugher is the co-adviser of BC Venture Competition (BCVC), which has now been absorbed into Start @ Shea, the student executive team for the new Shea Center for Entrepreneurship that launched last fall.

“Nick is not just a smart guy, he also has the emotional intelligence to push forward in a difficult space to do something that no one has ever done before,” Gallaugher said. “He was able to identify a pain and come up with the solution to solve it.”

When he first heard about the idea from Rellas, Gallaugher was skeptical because it can be hard to see where ideas will go and how plans will be executed with young entrepreneurs, especially when there are lots of people running the same space. Gallaugher pointed out that, for example, WePay, an online payment service provider based in San Francisco founded by Bill Clerico, BC ’07, had to deal with complicated money-laundering regulations.

The team faced a big challenge due to its unique situation: it was unable to compete in the BCVC, a University-wide business plan competition that could have earned the team $10,000, because there were concerns regarding whether BCVC could accept a team that wanted to do alcohol delivery.

“[The idea was] a combination of foolishness and tenacity, but tenacity is big because when faced with the question of why people couldn’t alcohol be delivered, the two kept asking, ‘Why not?’” Gallaugher said. So the group kept looking for a space where their model could work.

After Rellas and Robinson decided to pursue the idea, they spent a lot of time in the market doing research. The two got jobs at a local liquor store, the Gordon’s in Waltham, to better understand the process of how a liquor store works from the suppliers and wholesalers to the merchandising and margins.

“Being on the ground floor helped us understand what retailers’ priorities are when it comes to ordering and running a successful store,” Rellas said.

They talked to lawyers in the Boston area to learn the laws around alcohol and alcohol delivery. Rellas credits the research as one of the most useful actions they took before developing their product.

The alcohol industry is heavily regulated and laws vary from state to state, which means that Drizly has to work hard to make sure that it is compliant in each state it does business in. It receives counsel in every state it has a presence in to help navigate the regulations so it can provide alcohol delivery in a compliant and safe way. According to Rellas, navigating the laws have been some of the hardest times, but also some of the most rewarding, when Drizly launches successfully in a new market that may have posed roadblocks early on.

While Rellas mentioned that there are many great accelerator and incubator programs in Boston for aspiring entrepreneurs, Drizly was not a product of any of them.

“Simply put, we would not be here without the support, encouragement, and nurturing of the Boston community,” he said. “We had to earn the opportunity to be a part of it by getting Drizly off the ground, but once we did the entire village helped raise and grow the company. We’re proud of Boston, Boston’s startup scene, and our place within it.”

Gallaugher made the introduction to the first tech outlet that covered Drizly, which put the company on the map and got things rolling. In January 2014, Drizly raised $2.25 million in its first round of seed funding and another $2.5 million in May 2014. Through its series-A funding round led by Polaris Partners, the technology company landed $13 million.

Rellas said that less than 2 percent of alcohol sales happen online, but he thinks that this industry will catch up to the rest of the consumer-packaged goods world over the next five to 12 years and approach 12 to 15 percent of total sales happening digitally. This is equal to $12 to 15 billion in potential digital sales and Drizly hopes to be the first to venture into the area