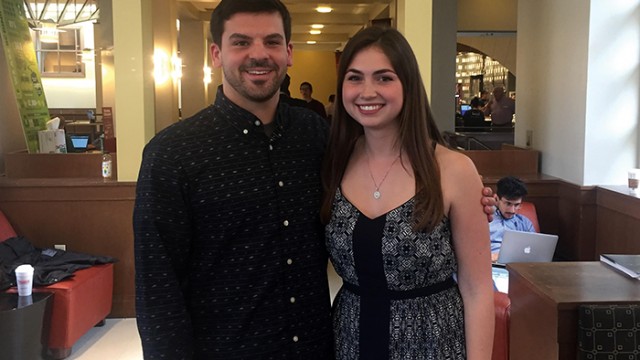 Thomas Napoli, Undergraduate Government of Boston College (UGBC) president and MCAS ’16, and Olivia Hussey, UGBC executive vice president and MCAS ’17, set out to accomplish various improvements on campus throughout their term, including expanding resources for LGBTQ and AHANA students and improving students’ relationship with the administration. In a year marked by clashes between students and the administration, UGBC was often able to form a bridge. Though it did not accomplish all of the policy goals that it had hoped to, it believes that actions it took this year will make it possible for future generations to make change.

Napoli and Hussey began in September with the “big five” goals—expanding mental health resources and awareness, protecting free-expression rights, increasing resources for LGBTQ students, creating a more inclusive environment for AHANA students, and improving the first-year transition process. In each of these areas, they experienced successes and failures. Napoli and Hussey plan on releasing a comprehensive summary to their term later this week.

Much of Napoli and Hussey’s campaign in the spring of 2015 focused on the free-expression policy, an addition to the Student Guide that would make it possible for students to protest and distribute fliers on campus. The original proposal also suggested that the University form a Committee for Free Expression. After two protracted semesters of regular meetings and discussions, the policy aspect was ultimately rejected, though the formatting was changed. Napoli and Hussey later released a demonstration form to make it easier for students in non-registered groups to protest. But, this was later declared irrelevant after the University’s policy changed to allow individual students to protest on campus.

Although they were unable to change the student guide to expand freedom of expression, Hussey said this has been the most active year for protests on BC’s campus since she’s been at BC. All nine demonstrations that students applied for were approved by the Dean of Students Office, Napoli said.

Napoli and Hussey also created the incubator phase program, a proposal to allow more student organizations to have expression rights. This will probably be approved for the 2016-17 school year, they said.

Change has come in small steps for the LGBTQ community as well. This year, UGBC was unable to change gender identity and gender expression in BC’s non-discrimination clause, although a bill was passed in the Student Assembly over a year ago. The Queer Peers Program and the GLBTQ Undergraduate Society were also institutionalized this year, following a time of tension between LGBTQ leaders and the administration.

“We have our big advocacy goals, and then we also wanted to do stuff that really impacts students on a day-to-day level.”

Last semester, following several high-profile protests, Napoli and Hussey, along with Afua Laast, UGBC vice president of diversity and inclusion and LSOE ’16, addressed the University Board of Trustees with a working proposal about addressing problems of diversity on campus. At the Dec. 7 meeting, they discussed institutional racism and inclusivity, using student narratives. They set a Jan. 19 deadline for the University to respond to the plan, but the University did not adopt an official plan of action by that date.

This year’s leadership also hoped to improve mental health resources on campus. They were unable to implement a mental health awareness program due to a lack of support from the Office of Health Promotion. But, they were able to assist in adding two more counselors in the University Counseling Services, starting next year. It should not end there, Hussey said.

“In my opinion, there are never enough resources, so that is tough because I think every year you can come back and advocate in different ways,” she said.

A lot of the goals that they accomplished, she said, were because of their outlined goals going into their term. Although not every goal on Napoli and Hussey’s 42-page platform was reached, it did help guide them throughout their term, Hussey said. Despite a lack of success in shifting University policy, they were also able to accomplish things that were not on their original platform, including events like Politicizing Beyonce, SLAM! the Stigma, and Bring It to the Table.

They are both proud of bridging the gap between students and administrators. Napoli and Hussey helped to organize events such as the information town hall meetings and BC Looking Forward, which brought in high-level administrators to engage with students.

“We’re proud of the organization for really pushing along as an advocate for students,” Napoli said.

Napoli and Hussey also aimed to improve student life on campus. UGBC met with BC Dining Services to advocate for continued avocados in the dining halls, for example. They also helped to make the first floor of O’Neill Library open 24 hours a day.

“We have our big advocacy goals, and then we also wanted to do stuff that really impacts students on a day-to-day level,” Hussey said.

Over the course of the academic year, UGBC held over 90 events on campus, including mental health advocate Kevin Breel and the What I Be photo campaign.

“We hope that going to an event can make you think or change your perspective and hopefully improve the students’ BC experience,” Hussey said.

Napoli said he wished that they had been more transparent insofar as informing the student body of what UGBC was doing behind the scenes. For example, not many students know that they worked with Dining Services to get healthier food at Late Night.

“That’s something that we started to learn in the second half of the year—communication was really difficult because UGBC already has a stigma, what students think about it, how students interact with the organization,” Napoli said.

He said that they tried to implement an outreach program. They did a March Madness policy bracket to try to better understand what students wanted to see on campus. He hopes that future president Russell Simons and EVP Meredith McCaffrey, both MCAS ’17, will continue to try to institutionalize such outreach programs.

Hussey said that such communication would also allow for students to understand why UGBC cannot accomplish certain goals. She said that during their term, she and Napoli tried to communicate with the student body through interviews, articles, and newsletters, but she sees that there is room for improvement in being transparent with students.

Napoli and Hussey were, however, able to do a lot of preliminary research and organize several meetings to get the conversation going on some of these issues. For example, they met with Vice President for Human Resources David Trainor about gender identity.

“This is a conversation that’s probably going to be had for the next three to five years,” Napoli said. “Progress can be like a trickle, especially at BC.”

“Progress can be a trickle, especially at BC.”

Similarly, many of the goals that Napoli and Hussey accomplished had been in the works for many years. For example, the installation of printers in Corcoran Commons was an initiative started almost 10 years ago.

“So by no means was it just us who ended up doing that,” she said. “That is the result of a long line of UGBC-ers coming in and saying students really want it.”

In order to get these long-term goals accomplished, Napoli said, the administration needs to see a well-researched, well-written proposal to understand what the effects of the new initiative will be.

“They also need a degree, I think, of social pressure—knowing that students want this,” he said.

Through their various programs and the two Evening with the Deans held this semester, Hussey said, the administration has been able to see what the students really care about.

“The administrators hear direct feedback from students who aren’t necessarily in UGBC, and if you hear the same themes more than once and from different groups of students, you have no choice but to listen and respond,” Hussey said.

A lot of their work, Napoli noted, however, does not require so much response. A lot of the work that they did simply required emailing administrators and setting up meetings to get things accomplished.

As for the future of UGBC, the next president and executive vice-president are highly qualified for the positions, Napoli said.

“I think they have a really comprehensive understanding of how politics at BC works,” he said. “I don’t think they really need our advice.”