As the seasons shift, the heat will begin to subside, tans will woefully lose their luster, and beach towels will once again be stowed away for months. And just like that, the memories of summer and all its accoutrements fade and atrophy. Though the summer of 2016 is entering its twilight hour, the vast stores of television gold will serve as a reminder for us of all the merriment, debauchery, and good times had.

From the premiere of the Stephen King-inspired happenings of Stranger Things to the always tumultuous and retching endings in Game of Thrones, the summer of 2016 has stamped itself firmly into the history books as worth a gander or two. Continuing successes, and penning new ones, television in the summer of 2016 will not fall victim to erosion or fading. Though the lawn chairs and grills will be retired, the great television of this summer is but a click away, ready for all to enjoy on every small screen and monitor.

Continuing down the avenues of ’80s nostalgia and entertainment love letters to the ages of old, Stranger Things encapsulates the look and feel of classic, big screen productions. Hitting notes from The Goonies (1985), Stand By Me (1986), The Thing (1982), E.T. (1982), The Evil Dead (1981), and  innumerable other ’80s cinema staples, the series is rife with sight gags and blatant references while maintaining an elaborate and gripping multifaceted story. After the sudden disappearance of pre-teen Will (Noah Schnapp), a group of boys (Gatten Mozzaratto, Caleb McLaughlin, Finn Wolfhard) along with Will’s mother (Winona Ryder) and sheriff Jim Hopper (David Harbour) investigate his disappearance. When a strange girl with a shaved head arrives in town at around the same time, the coincidences and mystery of the events plunge the town deeper and deeper into the rabbit hole.

Game of Thrones saw fitting ends to scores of characters in grandiose styles not seen since Season 2. Venturing far from its source material, this season made for engrossing television as the world ventured into untested grounds outside of George R. R. Martin’s epic framework. Though it is known that all men must die, at least in regards to this bloody season, this includes women and children too.

Another HBO show has also sparked considerable interest dues to its graphic and grave content. The Night Of is an anthology series. The story follows Naz (Riz Ahmed) as he lives through a harrowing prison experience, accused of the vicious murder of a young woman (Sofia Black D’Elia) of which he has no recollection. Naz must, in fashion sure to turn stomachs, confront himself as a potential perpetrator, just as others pass a similar judgement from the outside. As courtroom tension mounts and Naz’s future looks bleaker and bleaker, it is up to his lawyer John Stone (John Turturro) to prove Naz’s innocence and uncover the mysteries of the night in question.

Scream, MTV’s television spin-off of the classic ’90s slasher hit, made considerable strides in its sophomore season. The residents of Lakewood continue to battle with a new killer donning the Ghostface mask. As he leaves he takes the blade to his victims, leaving their remains blood-soaked, burned, and eviscerated. Relationships buckle under the weight of the murders, and friends begin to question each other’s loyalty and motives. At the center of it all, Emma Duval (Willa Fitzgerald) finds that no place—home, school, or otherwise—offers safe passage, as she navigates a community filling with remnants of the killer’s violent marauding.

On a quieter note, AMC’s Preacher opened this summer with little recognition or buzz. The DC comic adaptation follows Jesse Custer (Dominic Cooper), an old Southern preacher, faltering on his failing faith. After his body comes to harbor a powerful being, he is imbued with powers that make him an efficacious voice crying out in the desert. Custer holds a power so provocative that it pulls at every moral fiber in his body and soul. Harnessing the power and becoming a true preacher of all things good and evil, he, along with Irish vampire Cassidy (Joseph Gilgun) must take the fight to foes in this world and the next.

To be sure, there are plenty of other television shows that graced our screens this summer (The Get Down, Orange is the New Black, and Mr. Robot to name a few). Thus is the beauty of this summer in television, like a summer’s eve sunset. With so much to see, it is unlikely that one would fully relish in it all at once. In the coming winter months, as we rest about the fire and as the storm rages outside, we will dream of warmer months, watching tokens from a summer past to keep us company in the meantime.

Featured Image By The Weinstein Company

game of thrones stranger things the night of preacher scream
A Call to Arts
Spears Continues to Seduce, Serenade, and Solidify Pop Legacy in ‘Glory’ 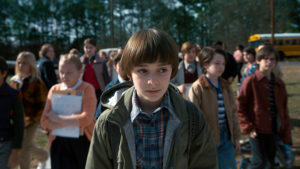