After receiving its highest-ever preseason ranking, No. 8 Boston College field hockey knew it was both a blessing and a curse. Having its talent recognized on the national level is what all teams dream of. But such a lofty title can be hard to carry. Over this past weekend, the Eagles struggled to uphold the prestige the National Field Hockey Coaches Association bestowed upon them and lost both games at the Big Ten-ACC Cup.

On Sunday afternoon, BC faced one of its toughest opponents, the Maryland Terrapins. Although it appeared the Eagles might make a comeback late in the game and upset the reigning Big Ten League Champions, they fell short. Unfortunately, the competition was too much for the No. 8 BC team (1-2), causing No. 6 Maryland (2-2) to finish the game with a 3-1 victory.

After the opening whistle, the Eagles flew downfield toward the goal. BC had multiple chances in the circle, but struggled to get any shots off due to the swarming Terps’ defense. Once the Terps maintained possession, they went on an offensive strike of their own, firing off four shots at Audra Hampsch. The Eagles successfully denied their opponent a goal, but Maryland didn’t let up. Minutes later, Welma Luus blasted one low into the goal to give the Terps a 1-0 lead. The Eagles attempted to answer, but Sarah Holliday stood strong in net to maintain her team’s lead going into the second half.

The Eagles were hungry for a goal. They beat their defenders, kept their passes strong, and tried to take advantage of fast breaks. After firing five shots at Holliday, BC was ready for a breakthrough. Brittany Sheenan saw a loose ball in front of the goal and took the opportunity to deflect it into the net to make it a 1-1 game.

With 18 minutes left in the game, the Eagles had ample time to strike again. But the BC offense struggled, getting only one more shot off before the final buzzer. By fighting to the finish, Terps proved they were the better team. With five minutes remaining, Maryland’s Emma Rissinger slipped one past Hampsch from the near post. Down 2-1, the Eagles decided to pull Hampsch in exchange for an extra offender. Seeing this as an easy opportunity to seal the game, Luus netted her second goal of the game to give her team a 3-1 victory.

The Eagles also struggled early in the Big Ten-ACC Cup against No. 16 Northwestern (2-1) with a 2-1 loss, a game that should have been a guaranteed win. BC struck early with a goal 13 minutes into the game after Sheenan’s low tip-in. The Wildcats continued to fire at Hampsch but she denied every ball that came her way in the first half.

But the Eagles’ offense was silent in the second half, allowing Northwestern to make a comeback. With seven minutes remaining, the Wildcats received a penalty corner and took full advantage. After the ball was inserted, Elena Curley deflected Isabel Flens’s pass in order to tie the game at one.

The penalty corners would come back to haunt the Eagles only minutes later. With time expired, all BC’s corner unit had to do was get the ball outside the circle in order for the game to be over. The Eagles committed penalty after penalty, allowing the Wildcats to string together four penalty corners in a row. On the fourth and final corner, BC still could not get the ball outside the circle. Kirsten Mansfield converted with no time remaining in order to upset the Eagles with a 2-1 victory and hand BC its first loss of the season.

field hockey northwestern wildcats maryland
A First Look at Rugby Through the Eyes of an American
After a Decade-Long Debate, Printers Are Installed in Lower 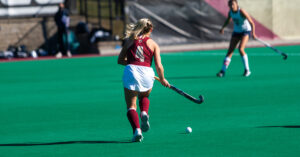