This year, 2,319 freshmen recently made Boston College their second home.

During the admissions process, 28,956 students applied to be a part of BC’s class of 2020, but only 32 percent of applicants were accepted into the freshmen class. Last year, BC admitted 28 percent of its applicants for the Class of 2019.

Within the class, 46 states and 41 countries around the world are represented.

Sixty-seven percent of first-year students are currently enrolled in the Morrissey College of Arts and Sciences, traditionally the largest of BC’s four schools. Twenty-three percent of freshmen reside in the Carroll School of Management, and 5 percent of students are in both the Connell School of Nursing and the Lynch School of Education.

The class of 2020 had SAT scores ranging from 1910 in the 25th percentile and 2150 in the 75th percentile, and on average exceeded the national mean for colleges by roughly 500 points.

This year, 32 percent of the freshmen body is composed of AHANA students or international students of color. The Office of Undergraduate Admission has been working to diversify the student body in recent years by making connections with community-based organizations, creating ties with different preparatory schools across the country, and targeting high schools that have large populations of AHANA students, said John Mahoney, director of undergraduate admission.

Fifty-four percent of the class is female, while 46 percent is male. One in every nine freshmen is a first-generation college student.

The most students come from Massachusetts, New York, New Jersey, California, and Connecticut. Outside of the United States, students come from 41 countries including Ireland, Costa Rica, Republic of Korea, Madagascar, and Tobago.

BC has granted financial aid to 60 percent of the freshman class, to a total of $35.7 million. An individual student, on average, receives $38,930. BC is one of 19 schools across the country that maintains need-blind admissions and promises to meet full demonstrated need for all students.

In addition to the 2,319 students from the class of 2020, 141 transfer students have also come to BC this fall. One thousand three hundred ninety-four students applied to transfer to BC, and 26 percent were accepted. Transfers had an average collegiate GPA around 3.7 and came from 24 states and four different countries.

This past summer, BC saw 8 percent more visitors on campus than in prior years. Roughly 11,000 prospective students toured, and four tours and panels were given per day.

Mahoney attributes the uptick in visitors to the new construction of the Thomas More Apartments, the jump in Forbes’s rankings to the number 22 school in the country, and the University’s location in Boston, known for being a college town.

“I think it’s the reputation of the place, that just continues to get stronger with each passing year,” Mahoney said.

ahana class of 2020 office of undergraduate admission forbes rankings
All the Ireland Headlines We Wanted to Write for BC Football, But Didn’t
Tunnel Vision: Watching the People Waltz By 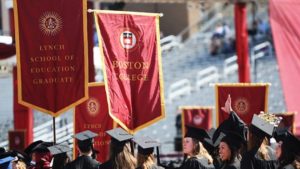