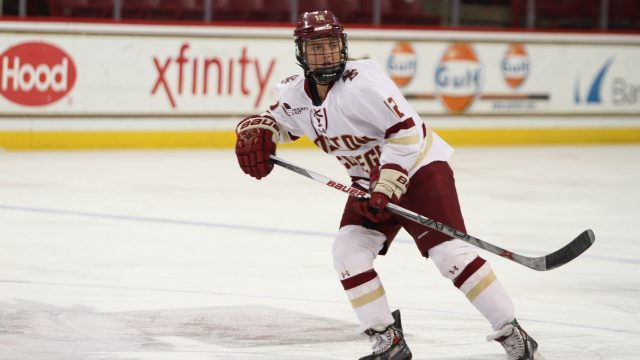 Boston College’s most successful team is only weeks away from returning to action.

On Thursday afternoon, BC women’s hockey announced its schedule for the 2016-17 season. The Eagles, last year’s NCAA runners-up, will play a 33-game schedule with 24 Hockey East games.

“We’re very excited about the group of players returning and the freshmen joining our team,” head coach Katie Crowley told BCEagles.com. “We’re ready to get the season started.”

The Eagles open with two exhibition games at Kelley Rink. On Thursday, Sept. 22, BC hosts the Boston Pride, an NWHL team, at 7 p.m. The Pride’s 17-woman roster features four recent BC alumnae: Blake Bolden, Emily Field, Lexi Bender, and 2015 Patty Kazmaier Award winner Alex Carpenter. This game counts against the team’s typical 34-game schedule—only scrimmages against Canadian amateur or college teams, like BC’s second game on Friday, Sept. 23, against the Cambridge Rivulettes junior club, do not qualify under those guidelines.

The regular season officially begins with a two-game series against Minnesota Duluth, beginning on Friday, Sept. 30, at 8 p.m. in Duluth, Minn. A key non-conference matchup for the Eagles will be Quinnipiac in a home-and-home series on Oct. 21 and 22. Quinnipiac is the defending ECAC champion, with a record of 30-3-5 (16-2-4), and is the best opponent BC will play in 2016.

Another highlight of the nonconference schedule is a Tuesday, Jan. 10 game at 8 p.m. against Harvard at Fenway Park. Proceeds from the event will go toward the Denna Laing Fund, named after the former Pride hockey player who had a spinal cord injury at Gillette Stadium last season. Other non-conference opponents include Syracuse, Dartmouth, and BC’s two opponents in the Beanpot. The Beanpot begins on Tuesday, Jan. 31 at 5 p.m. against Boston University at Northeastern’s Matthews Arena.

BC’s Hockey East slate opens against Maine on Saturday, Oct. 8 at 2 p.m. This game is also the Eagles’ overall home opener. The Eagles come into this season unbeaten in their last 49 games against Hockey East opponents. Their most recent regular season conference loss came against Connecticut, a 2-0 loss on Feb. 8, 2014.

The Eagles will have 18 games in the fall semester: six at home, 12 on the road. The second semester will have 15 games—nine at home (Frozen Fenway counts as a home game), four on the road, and the two neutral-site Beanpot games. A majority of BC’s home games will begin at 2 p.m., though it will have three primetime home games at 7 p.m.: Nov. 4 vs. BU, Jan. 7 vs. BU, and Jan. 13 vs. Merrimack.