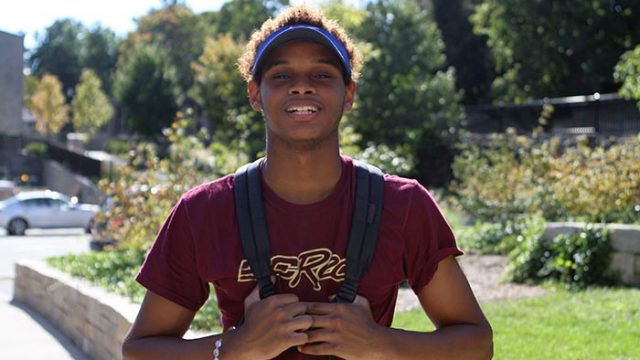 Minaldy Cadet, MCAS ’20, seems like any other freshman on Boston College’s campus. He wears a backpack and has headphones in his ears as he walks to class. But the story of how he got here is unlike any other student’s at the University. Cadet immigrated from Haiti when he was a toddler, and his path to citizenship has been plagued by obstacles that made a BC education seem out of reach.

A few weeks before the fall semester began, Cadet was denied a green card, which he needed to receive his financial aid package. He was unsure how he would pay to attend BC, and it was too late to enroll at any other university.

But before that, before the absent green card caught the attention of a former and a current senator, an archbishop, and The Miami Herald, his college application process started out like many other high school seniors’.

“The whole college process was sort of random,” Cadet said.

When he was first getting ready to apply to college, he didn’t have a top choice. He had been applying to various schools but wanted to really involve himself in one application and put his best foot forward. After spending a weekend reflecting on what he wanted in a school, he decided BC was the school for him. He learned about the university through older friends and Google searches.

“Boston College really focuses more in terms of education, which I really enjoy coming from a high school that was all about sports,” he said.

He applied regular decision because he missed the Nov. 1 early action deadline, and got the response he was hoping for—an acceptance letter.

After being admitted, he was fairly sure he wanted to enroll at BC. Cadet said he received a potential financial aid package a few days later that would allow him to come to BC. But BC could only give it to him if he had an I-485, or a green card. Minaldy is an immigrant from Haiti—he moved to Fort Lauderdale, Fla., in 1999 when he was just two years old and has attended school in the U.S. for his entire life.

“That’s where the conflict started, because at that time we didn’t have the I-485, but we were strongly confident that it was going to come very soon,” he said.

BC then gave him an unofficial financial aid package, which his financial aid advisor said would become official when he received the I-485. It turns out that the process was not as simple as they assumed.

This past summer, Cadet and his family were approved for an interview with the Immigration Office in Florida, which is usually one of the last steps in the process of getting a green card.

Originally, Cadet’s interview for a green card was supposed to be in September. Although he was confident that he would be approved, Cadet contacted some people in July in an attempt to move the interview date back to August so that he wouldn’t have to go home in September for it. He managed to get in touch with former senator Chris Smith, who helped him move his interview up to August, before school began.

At the same time, Cadet said, he struck a deal with BC, which told him that he could begin school with the freshman class in late August and then go back to Florida in September for his interview.

“But that kind of fell through because I wanted to do the interview in August and surprise them with the green card,” he said.

At the interview, however, the immigration officer told Cadet and his family that they could not get their green cards because they had overstayed their visa between the time that they first arrived in the United States in 1999 and when they started to apply for the green card in 2004.

“Immigration had us going for 12 years thinking that we were in the clear,” he said, referring to the time period between 2004 and the interview that took place this past August. “If they had informed us that they were not able to get it because of something that happened in 2004 back in 2004, we would’ve gone a different route or done something else different. But we weren’t aware at all.”

Back when they first arrived in 1999, his father paid someone to take care of the paperwork for him. But the man turned out to be a fraud, submitting the wrong documents.

“I’m not too aware of what happened at the time because I was so young,” he said. “But, from what I understand, he took advantage of my family, and instead of doing this, he did something else.”

Once his parents realized what had happened, they decided to restart the application process on their own in 2004. The plan was to have Cadet’s grandfather, who is a citizen of the U.S., apply for Cadet’s father to be a citizen, and Cadet’s father would then apply for the rest of his family to become citizens. This sort of application is known as an I-30F.

Cadet said that this is a widespread issue within the Haitian immigrant community—many of his mom’s Haitian friends overstayed their U.S. visas as well.

“The way I’ve been told and the way I’ve experienced it is that from 2004 to currently we’ve been doing everything in the right steps,” he said.

His parents have sent in all of the required paperwork and paid the fees associated with them for green cards.

“For each step, we’ve been approved all the way,” Cadet said. “My parents reassured me that we were going to get it—we didn’t do anything wrong, we were never on the wrong side of the law.”

Following the interview, Cadet and his family went to an immigration office. The people working in the office told them that they were beginning to strictly enforce this law.

The immigration officer called BC and asked if there was any way he could still receive financial aid. Bernie Pekala, director of student financial strategies, told him that BC’s policy states that if you are eligible for federal aid, you also qualify for BC financial aid. This policy has never been waived, but they said if Cadet could get some letters of recommendation, they would try to help him.

“That’s what I did immediately,” he said.

Cadet returned to his high school and asked several professors and guidance counselors to write him letters. He also spoke with Smith and Archbishop Thomas Wensky of Miami.

Despite the numerous letters he submitted to BC, Cadet’s request was not approved.

“I was majorly heartbroken,” he said.

A few days later, in a last-ditch attempt, he and his parents drove to BC from Fort Lauderdale and asked if there was a way he could do one semester. At this point, it was too late for him to enroll at any other school because all of the deadlines had passed.

Since the ordeal last month, Cadet’s story has gotten some attention. The Miami Herald interviewed and wrote an article on him after his father took out the loan. Florida Senator Marco Rubio reached out, Cadet said, telling him not to worry about money. Rubio’s office confirmed to The Heights that he has been working with Cadet and his family to discuss possible solutions. Cadet also has a GoFundMe page, which has raised just over $5,000 so far. All of this media attention has made lawyers want to represent him and people want to support him.

“I’m just really humbled and honored that people are supporting me,” he said.

Cadet has not yet heard if BC will support him for the fall semester. Right now, Cadet is paying for this semester with his father’s loans. Financial services representatives from the Office of Student Services were not able to comment at this time.

“If we can get our green card, the whole issue would be solved,” he said. “So that’s what we’re aiming at—getting the green card.”

Rubio is doing all that he can to help him get a green card, Cadet said. And for now, Cadet is one of the 2,319 freshmen in BC’s class of 2020. Cadet moved into his dorm on Upper Campus on Monday, Aug. 29 at 1 a.m., and started classes later that day.

Cadet is looking forward to getting involved with community service, which his high school didn’t really offer, through his PULSE class. As a biochemistry major, Cadet is also taking cells and molecules, calculus, and general chemistry. Though he was originally interested in joining a dance group, he decided the time commitment would be too much. Cadet’s parents are making a financial sacrifice to send him here without the aid package, so he feels that it’s best to stick to his studies.

“So far, so good,” he said. “I’ve been studying sort of religiously. When I’m done with classes, I spend like six hours in the library just reviewing all of my notes and homework.”

financial aid the miami herald minaldy cadet
Meehan Carries BC Past Northeastern in Overtime
From Age 12, Pemberton Had His Heart Set on Boston College 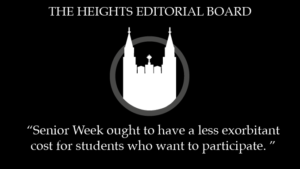