Home » Meehan Carries BC Past Northeastern in Overtime 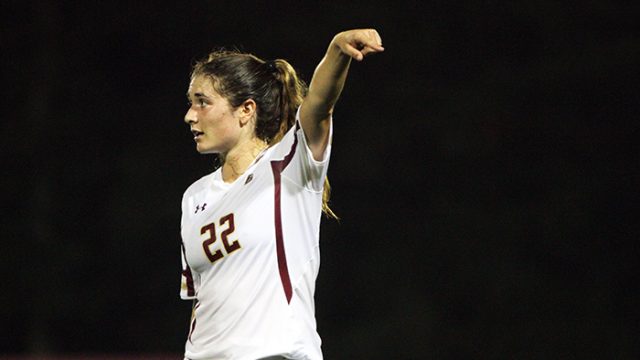 Meehan Carries BC Past Northeastern in Overtime

Three seconds. That’s what decided whether Boston College women’s soccer would suffer its first loss of the season or remain unbeaten.

After spending 89 minutes and 57 seconds outplaying Northeastern (3-4-1) without producing a goal, senior Andrea O’Brien finally broke through with her first score of the season, extending the game to overtime, when redshirt senior McKenzie Meehan’s header off a set piece lifted the Eagles (7-0-1) past the Huskies, 2-1.

O’Brien’s was a play borne of desperation. With seconds remaining, BC junior Lauren Berman found herself with possession of the ball to the right of Northeastern goalkeeper Nathalie Nidetch. Without a clear angle toward the goal, Berman did something she normally wouldn’t in that particular spot if she were playing for a professional team: She sent the ball sailing toward the net, hoping for a deflection, because time was of the essence.

College soccer is different from the brand you might see on television. In the pros, the referee is timekeeper, and the game ends after the last possession has expired. Not so in the NCAA, which counts down from 45 minutes each half and sounds a final buzzer when the clock flashes double-zeros—no matter where the ball is.

O’Brien, in the right place at the right time, deflected the ball into the net, evening the score at one at the eleventh hour and setting the scene for Meehan’s late-game heroics.

Northeastern got its lead in the 62nd minute, when Huskies midfielder Breeana Koemans netted a penalty kick after a BC foul in the box.

After that goal, though, the Eagles dominated possession of the ball and pushed as many numbers forward as they reasonably could, creating a slew of scoring opportunities but failing to capitalize.

BC defender Allyson Swaby served up a dangerous corner kick that found senior forward Hayley Dowd in the box, but Nidetch scurried over to make the save.

Just minutes earlier, Dowd looped a shot over the wall and on target from 24 feet away off a free kick. Nidetch collected the ball confidently.

In the 84th minute, freshman defender Samantha Hiatt kicked a laser that doinked off the post.

The Eagles outshot Northeastern 20-7 in regulation and 23-9 overall, finishing with 10 shots on target compared to the Huskies’ five.

Meehan finally broke the stalemate a minute and 14 seconds into the second overtime period. Cagey freshman forward Jenna Bike recorded her team-leading fifth assist of the season by chipping the ball to Meehan off a set piece just outside the box in double-overtime. Dowd earned that free kick for the Eagles by drawing a foul on the Northeastern defense.

Meehan’s game-winner was the 18th of her career, a school record. She now has seven goals on the season.

Junior goalkeeper Alexis Bryant turned away four of the Huskies’ shots, including two critical blocks from close range as the first overtime period wound down. The opportunities were Northeastern’s first since its lone goal in the 62nd minute.

With the win, BC has swept the Boston schools—Boston University, Harvard, and Northeastern—outscoring them by a combined margin of eight to one.

The Eagles’ defense has surrendered just four goals in eight games so far this season, a testament to the strong play of Hiatt, the U.S. Under-18 national team captain, and her back line teammates.

Top Drawer Soccer has BC ranked No. 13 nationally in its latest standings, the highest the Eagles have climbed in recent memory. According to NCAA.com’s RPI ratings, BC rests much lower at No. 41 due to its relatively cushy, non-conference slate.

The Eagles have one more tune-up game at home Wednesday against LIU Brooklyn before the ACC slate begins.