Eagles Remain Winless in ACC With Loss to Irish

After a hot start to the season, Boston College women’s soccer has struggled to open conference play. Coming off a loss on Thursday against Wake Forest, the Eagles looked to bounce back Sunday against Notre Dame and earn their first win in the competitive ACC.

The Irish (9–1–1, 3–0–0 Atlantic Coast) have historically dominated the rivalry against the Eagles (6–4–1, 0–3–0), leading the all-time series 14–1. Notre Dame’s offense came out aggressive and put pressure on BC goalkeeper Wiebke Willebrandt from the jump and finished with a 4–1 win over BC.

Officials showed BC defenseman Haley Thomas a yellow card in the fifth minute, handing a penalty kick to Notre Dame leading scorer Sammi Fisher. She took advantage of the opportunity and fired the ball past Willebrandt to give the Irish a 1–0 lead.

Fisher and the Irish continued to attack the BC defenders throughout the first half. Fisher had two more good looks at the goal in the first half but missed just wide. Though the Irish put up 11 shots in the half, Fisher’s early tally was the only one that found the back of the net.

The Irish kept the ball in their offensive zone and controlled possession the entire half. BC did not register a single shot on goal and only recorded one total shot throughout the entire first half.

Down by one goal, BC came out of halftime with aggression, led by captain Jenna Bike. She fired two back-to-back shots to open the second half. Sam Smith also sent two shots just wide of the net, but BC suddenly had wind back in its sails.

The Eagles committed another costly penalty in the 64th minute and gave Notre Dame midfielder Maddie Mercado a penalty kick. She took advantage, firing the ball past Willebrandt to give the Irish a 2–0 lead.

The teams went back and forth for another few minutes until the Irish converted once again. Erin Hohnstein found defender Kaylie Ronan for the goal, giving the Irish a 3–0 lead with only 20 minutes left to play.

Though all hope looked lost, the Eagles continued to fight and drew a penalty of their own in the 74th minute. Forward Linda Boama took advantage of her penalty shot as well, firing the ball past Irish goalkeeper Ashley Naylor. The goal marked Boama’s eighth of the year, making her the Eagles’ second leading scorer.

Even ahead by two, Notre Dame’s offense didn’t slow down. Fisher once again found the back of the net on an assist from Naylor, adding an insurance goal to what already looked like a runaway game for the Irish. 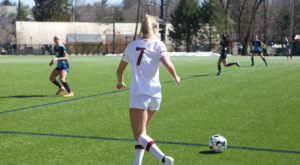