A Defense of Donald Trump

In 1964, President Lyndon B. Johnson’s campaign released an ingenious if nasty advertisement in which a nervous Republican spoke about how proud he was of his party before revealing that he simply could not, in good conscience, vote for Republican nominee Barry Goldwater—and that, therefore, in order to rectify his party’s “mistake,” he had to vote for Johnson.

In 2016, Hillary Clinton’s campaign released a remake of the ad—amazing what it says for political discourse that we remake campaign advertisements—with the same actor, William Bogert, saying just about the same lines, this time about Republican nominee Donald Trump.

I did not know about the remake before yesterday, but it is fascinating, no? Of course, Bogert is an actor, paid to deliver these lines, and the whole thing may be charitably called a Clintonian scheme to attract Republicans over to her side. It is interesting, nonetheless, that a large number of Republican voters are so disgusted by Trump that they would be willing to vote for Clinton, one of the most flawed candidates in our history. These Republicans, often “Never Trumpers,” simply will not vote for Trump, no matter what, but don’t want to stay home—and thereby fall right into Clinton’s hands. I’ve spoken to some of them, and they’re fine, respectable people, often of a neoconservative bent, who passionately care for their country, its safety, and its people. As someone who will be voting for Trump in November, however, I’m forced to disagree.

Admittedly, a Trump voter cannot simply show all the reasons why Clinton is a despicable candidate—one can respond first that Trump is equally despicable and second that that doesn’t demand voting for Trump, only not voting for Clinton. Moreover, I have never been a huge Trump fan—I never supported him during the primary (my candidate was Marco Rubio), and for a while I was unsure whether to vote for him or not vote at all. Trump is not a conservative, of course, and I am—but then the Republican Party was never uniformly conservative. Yet nearly all conservative Republicans voted for the Republican nominee in the past, and we should do the same now. Conservatism, we must remember, is no ideology, and we make do with the cards we are dealt.

If we put aside for the moment the negatives associated with Clinton, then, we may also find a good number of positives, surprisingly enough, with Trump. Trump has become the first spokesman in ages for the large but marginalized percentage of the population that believes in traditional American integrity, hard work, and, yes, values. This last point is not to say that Trump is in any way a member of the so-called “religious right” (far from it), but then neither was Goldwater, as a matter of fact. Rather, when I say “values,” I mean an ethos of community, fellowship, enterprise—all of which are lacking from this progressive and materialistic modern culture.

Trump is brash, bold, and crass, and superficially represents everything this culture preaches—yes, but he is speaking for those who are not, those who have been put on the back-burner by our elites, those who feel that the America they knew and loved is dying. We may use Nixon’s term “the silent majority,” but we will have readers who harrumph and tell us that the “silent majority” is code for racists, sexists, homophobes, and God knows what else. Not so. Blacks and whites, men and women, people of every walk of life: all members of the silent majority, examples of the forgotten man who believes in pulling himself up by his bootstraps, loving his family and his neighbor, and defending his country. They may not be classified under the label “conservative,” but they have a fundamentally conservative ethos, to which Trump is boldly speaking.

Trump presents a veneer, of course, of coarseness, bluster, and trash-talk—such is his persona, the mask he shows to the world. Believe me, I fell for that mask too, and it was the image he liked to show—the strongman, so to speak. In fact, I wrote a very negative piece about Trump and once compared him to Mussolini! Since the primary, however, the mask has slowly been dropping, revealing a man who cares about his country and how much it’s falling off a dangerous precipice. He has become careful and even prudent in his speeches, with his meeting with Mexico’s President Enrique Peña Nieto (yes, I know they disagreed as to what was said, but can you imagine the caricature of Trump meeting Nieto at all?), even responding to Clinton’s “fall” cleverly rather than insultingly. You may say that it only proves what a low bar has been set for Trump, and I agree somewhat, but it does show the end of the character all the same. It’s amusing that Trump is the real heir to both FDR and Ronald Reagan, in the sense that he combines Roosevelt’s defense of the common man with Reagan’s bucking of the liberal status quo, rather than Clinton, who is engaged in trying to attract (somehow) the votes of both moderates and radical socialists (good luck with that).

In the final analysis, Trump seems to be no second coming of Mussolini, for which his opponents (which used to include me) deride him, but an advocate for the common man against rich, intellectual elites, as unlikely as that might have seemed a few short months ago. The modern progressive elite, often wealthy, non-religious, and intellectual, sees in him a dangerous figure, capable of destroying said elite from within. Perhaps he will, perhaps he will not. After all, he is not the best candidate, but he is the best candidate we have. Either way, he is the figure we need at this time—who can shake us up, make us doubt our preconceptions, and possibly—just possibly—make America great again after all. Our wonderful country, this shining city on a hill, this last, best hope for the earth, may be passing through the valley of the shadow of death, may have heard the chimes at midnight, but we have not succumbed even yet. With Clinton, we may be condemned to end the American experiment not with a bang but with a whimper. With Trump, despite his weaknesses, we have a chance to awake to another morning in America. 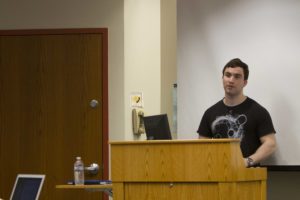 3 COMMENTS ON THIS POST To “A Defense of Donald Trump”