About 200 students and faculty members silently marched across campus on Thursday morning to “break the silence” that many people say surrounds LGBTQ, race, and ability issues at Boston College.

To accommodate students with disabilities, the march began at McElroy Commons, continued across campus, down Commonwealth Ave., and ended outside of Corcoran Commons. Mary Royer, chair of CSD and LSOE ’17, said the organizers had difficulty finding a route that did not have stairs. The University was cited by a state agency this past spring for disability discrimination on campus.

Christina King, MCAS ’18, came up with the idea for the march about a week ago and contacted student groups on campus. The march was focused around the idea “Silence is Violence,” which represents the University’s silence on the recent vandalism of the sign, disability access on campus, and LGBTQ rights.

The march was registered with the University, and both Dean of Students Thomas Mogan and Vice President of Student Affairs Barbara Jones were present. Mogan also wrote a letter to the editor in The Heights on Sept. 21 denouncing acts of intolerance and hate toward any individuals or groups of individuals on campus.

“It shows that when you want to do it right, work with a bunch of different groups and work cooperatively, we can do things like this,” Mogan said Thursday in reference to the march.

Eradicate Boston College Racism had originally hoped to be on the march’s sponsor list, but was denied by the Office of the Dean of Students because it is not an officially recognized student group, Mogan said.

Anne Williams, the chair of GLC, a coordinator of the march, and MCAS ’17, said that the demonstration was not a protest, but rather a space for students to express their feelings and frustrations.

When the students reached Lower Campus, after walking past Gasson and down Linden Lane, they raised their fists and began to chant “break the silence.” Many students stuck rainbow duct tape across their mouths to represent the administration’s silence when it comes to LGBTQ issues.

Organizers kicked off the rally by speaking about their personal experiences feeling isolated on campus. Dylan Lang, head of the Graduate Pride Alliance and GSSW ’17, talked about stories he has heard from students and faculty members, including students who are afraid to go to class and teachers who are afraid of losing their jobs because of their vocal role in LGBTQ issues, he said.

Lang also referred to his experience coming out.

“I have spent too much time silent in the closet, and I won’t be silent anymore,” Lang said.

Akosua Opokua-Achampong, chair of ALC and MCAS ’18, spoke about last year’s Black Out protest, in which students stood in solidarity with the University of Missouri. Policy needs to be changed on campus, she said, but so does the interpersonal culture between students and administrators.

“There are so many ways we can come together, and talk about this, and put our minds and our hearts together and stand by the Jesuit values that we enrolled here for,” Opokua-Achampong said.

Royer talk about the need to remove physical and social barriers for students with disabilities, before inviting up Tara Cotumaccio, MCAS ’17. Cotumaccio shared her experience of being blind in one eye and how uncomfortable she used to be when talking about her disability.

King, who originally came up with the idea for the march, spoke about the students who are the most affected by the silence on campus: freshmen. First-year students feel isolated, she said, when they do not realize the support that is present on campus, so demonstrations like this one are important to show students that there is a safe space at BC.

Organizers then invited students to the front who wished to share their experiences.

Sarah Joseph, SSW ’17, talked about how, as a woman of color, she does not feel safe anywhere, whether it be in Boston or on BC’s campus. She encouraged students and professors to bring these issues up in class, and attempt to make the University a safe space for students of all colors, sexualities, and abilities.

“If I don’t learn here how to feel accepted, I cannot help other people feel accepted,” Joseph said about her future career as a social worker.

The rally ended with with the crowd singing along to Sia’s “The Greatest,” which includes lyrics like “I got stamina” and “I’m free to be the greatest, I’m alive.”

Organizers asked students to leave behind posters, T-shirts, or emblems that represented their support for marginalized groups on campus in order to “reclaim their space.”

Students from several groups, including representatives from campus ministry, were also in attendance. Zoe Mathison, LSOE ’16, serves as an affiliate campus minister. She said she attended the protest because issues of race, sexuality, and ability are not discussed enough in the Office of Campus Ministry.

“There is this confusion that Jesus does not care about these issues and that he would not stand up for queer lives or black lives,” Matheison said about students’ misconception of the Catholic view on social issues.

Students were also invited to sign the Undergraduate Government of Boston College’s (UGBC) petition for the administration to create an LGBTQ resource center on campus. This comes after UGBC’s Student Assembly passed last week a resolution to call on the University to create a center for LGBTQ students. University spokesman Jack Dunn said in an email to the Boston Globe that the University is a “welcoming community that embraces all of its students.”

King said that what made this demonstration different from those in the past was the union between graduate and undergraduate students. She hopes that the coordination will allow the march’s message to spread even farther.

“To whoever defaced that sign, from me to you, I would like to personally thank you,” King said. “I believe in a God that works in mysterious ways, and because of you, the last straw broke my back and here I am.” 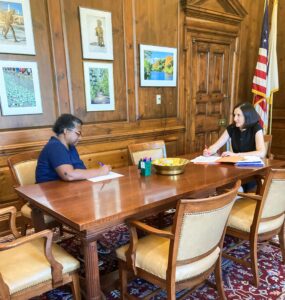