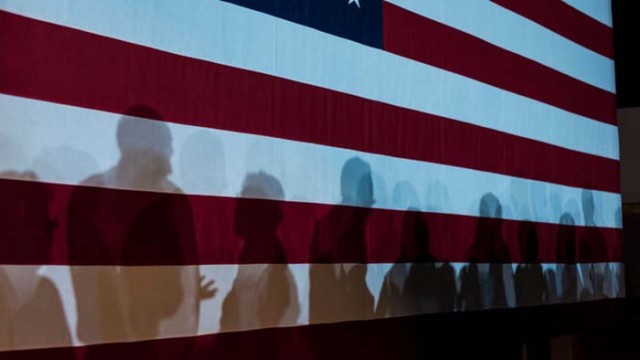 Learning Unity in the United States

A few weeks ago I wrote about how Boston College students are relatively apolitical, and how we should try to get more engaged in politics during the years we have here. This Thursday, over 200 BC students marched across campus to demonstrate solidarity with LGBTQ students. The protest didn’t materialize because of my column, but rather because of a parking sign in the Mod Lot whose letters had been rearranged to spell out a homophobic slur. Although the protest was prompted by this incident, many students joined because they felt marginalized for reasons other than sexuality, including race and disability. The march made me think about something our country has been lacking lately—unity.

As I suffered through the presidential debate on Monday, I couldn’t help but notice how divisive both candidates are. All kinds of tensions and hatreds are flaring, and Americans are becoming used to making enemies out of each other, compartmentalizing into groups and identities that further aggravate this fracturing and create a society of “others.”  Factionalism is a necessary component of a healthy democracy, but too much of it is neither healthy nor necessary. According to a poll conducted by the Pew Research Center, partisan antipathy has reached a new high, and Democrats and Republicans are more ideologically distant than they’ve been in recent history. Rather than searching for a middle ground, both parties have been moving toward extremes, meaning that those with mixed political views—roughly 40 percent of the population—are poorly represented. This polarization isn’t restricted to the realm of politicians, but extends to individual relationships. The number of Americans who expressed mixed political views has shrunk significantly since 1994, and animosity has grown between members of each party, while dialogue between them seems to have declined. It’s uncommon nowadays to see close friendships, much less marriages, between liberals and conservatives, as people increasingly prefer to associate with those who share their own political views. This is a dangerous trend, which is coming to threaten an important ideal.

Although I was born in the United States, my parents were not, and I lived in Italy with my family until I was seven. When we moved here, the first thing I noticed and loved about America was its diversity. As the daughter of an Israeli Jew and an Italian Catholic, I finally felt at home in a country that was all my own. A country where it didn’t matter where your parents were from, what race and religion you were, under what roof or star-spangled sky you slept at night. A country where, being born on the land, it was enough just to share a certain creed, a creed so strong that it could link a people more diverse than the world had ever seen. Coming from a very homogeneous country, where the only way you can be a citizen is if your parents are citizens, this blew my mind. How could a country with no unifying identity or culture, whose people hail from all corners of the globe, be so damn patriotic? In Italy—and a lot of other countries—it’s considered taboo to even hang a national flag outside. Even 200 years ago, a Frenchman visiting the United States wrote, “Nothing is more annoying … than this irritable patriotism of the Americans.” I was tickled by this line of Alexis de Tocqueville’s. Of course he expresses a lot of praise and admiration for America, but this line really got me, because I think he’d still say that today.

To me this patriotism is endearing, because what people are expressing pride in is not a land that their fathers have walked since the beginning of time, or a people who share certain genes and a certain history. What people are proud of is something intangible—just a belief, an idea maybe—but an idea that makes them American. It’s this acceptance of a government created by and for the people, a respect for the freedom and equality of others, which makes the country what it is. It may sound corny, but to a large extent it’s true, and it’s a fact that people seem to be forgetting, or at least failing to appreciate.

Living in other countries can open your mind to this, but even a quick study of the international spectrum must remind us that we are lucky to be living where we are. If you turn over a penny, you’ll notice the Latin phrase E pluribus unum: Out of many, one. When the motto was developed for the seal in 1776, its meaning was already ambiguous. Out of many states, one nation. Out of many countries, one democracy. And the most important, at least to me: out of many peoples, one people. This country needs leaders that will unite it, because in unity there is power. We must address our grievances, and never forget that at the end of the day we’re one people. To end with another line by that brilliant Frenchman, “America is great because she is good. If America ceases to be good, America will cease to be great.” Things may seem bad, but if we remember what unites us—which is really what makes us great—we will always be good.

politics patriotism
Conservative or Liberal? You Can’t be Both
Crossing the Divide in the Plex