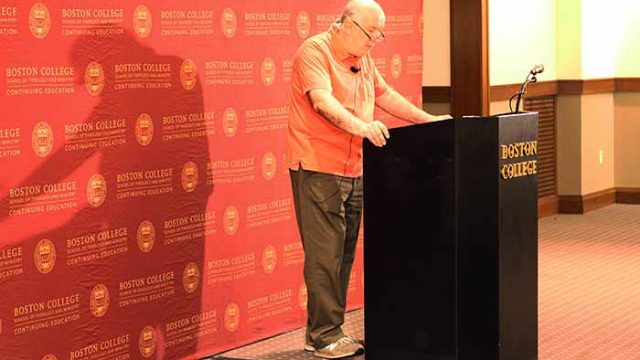 Kenneth Himes, a theology professor at Boston College, utilized his expertise in both philosophy and politics to give a unique and nonpartisan perspective to this year’s election cycle.

“Last January it struck me that it might be worth trying to read the signs of the times in the United States in a national election season,” Boston College professor Kenneth Himes told the audience Wednesday night. “And so, last spring … I suggested this as the topic [of this presentation]. I have lost count as to how many times I have kicked myself since then.”

At his lecture, titled “The Catholic Voter and the Signs of Our Times” and sponsored by STM and the Church in the 21st Century Center, Himes identified six key factors in this election that he considers to be the distinguishing signs of our time. These six factors follow in the tradition of the second Vatican Council that urged Christian communities to do the same.

The first factor discussed the rise of anger among the general electorate and the increased use of populist politics. Himes defined populism as the moral opposition between the people, who are understood as the rightful source of political authority, to the corrupt elites, who are viewed as having abandoned the common good.

Whether voicing fears about student debt or immigration, populist rhetoric has been prevalent in this election cycle as a means for candidates to speak for the people. Himes asserted that this phenomenon shows a growing discontent among the general population with the ineffectiveness of the government and an overarching reconsideration of the role of the government in the United States.

The lecture then shifted to a discussion of economic conditions in the country. Himes focused his discussion on the prevalence of trade policies in political rhetoric and the reformations the Republican Party attempted to make in the aftermath of the 2012 presidential election.

Himes explained that global trade creates both economic winners and losers, and those who do not benefit are the ones feeling more anger about the current economic climate in the United States. However, Himes was clear to point out that more jobs are lost to automation than to trade policies.

Himes argued that any measure to slow the growth of technology was futile at best, leaving trade policies as the scapegoat.

Himes believes that the New-Deal era idea of a social contract between workers and employers is all but gone, leaving a group of newly vulnerable individuals in our society. This led to another of Himes’s social markers—increased economic inequality.

One in five children live below the poverty line in the United States, Himes said. In no state can a minimum wage worker rent a one bedroom apartment for 30 percent or less of their total income.

“When you put economic deprivation together with social isolation, you have dry tinder,” Himes said, citing author Robert Putner. “Trump just lit the spark … he did not create it.”

Himes also touched on the prevalence of race relations during this election. This generation has not seen social progress comparable to what their grandparents experienced during the Civil Rights movement, he said.

Himes described the Black Lives Matter movement as a political awakening for young African Americans. This movement, though not caused by the election, is an integral aspect of it, he said. Himes believes that the topic of race relations is still an uncomfortable one for many Americans, but its importance is undeniable.

These factors culminate in a general sense of pessimism about the state of American politics felt by nearly every voter during this election cycle. Rather than dwell on this point, however, Himes closed his talk with the role Catholics can play on election day.

“As Catholic believers we need to close the gap between our two identities as disciples and citizens,” he said. “Catholic Social Teaching encourages us to take seriously the claim that the quality of one’s life is measured, at least in part, by the quality of one’s participation in the democratic life of this nation.” 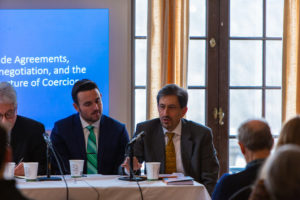