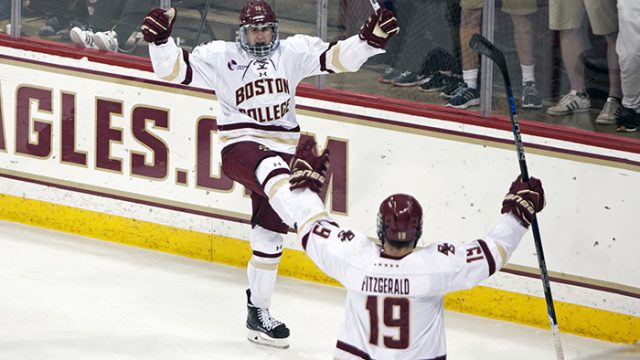 Through four games, a lot of things have gone right for Boston College men’s hockey in a 2016-17 season that began with much uncertainty. The Eagles have seen impressive work out of their two new goaltenders. They’ve broken in several freshmen on defense, like Jesper Mattila, Connor Moore, and Michael Campoli. And they’ve held their own against some of the nation’s best teams, even earning an upset victory against then-No. 3 Denver.

The only thing that hasn’t worked is the power play. Last season, the Eagles finished ninth on the man advantage, converting on 36 of their 168 chances. Entering the night, BC sat dead last in all of college hockey. The team was tied with three other teams—Minnesota, St. Cloud State, and Mercyhurst—for not having a goal on the man advantage. Yet the Eagles’ 0-for-23 mark was, by far, the worst in the nation. After the game, head coach Jerry York was in disbelief at that statistic. Only because he thought it was too low, that is.

So, in their home opener Friday against Colorado College, the Eagles scored on their first two power plays. And the game-changer was none other than Colin White.

With two goals—one on the power play—and an assist, White showed off the skills that made him a first-round pick of the Ottawa Senators two years ago. His play, coupled with an aggressive penalty kill, gave the Eagles a 4-1 victory over Colorado College.

Despite the final score, the Tigers (1-3-0) actually kicked off the scoring parade. The Eagles left Ryan Edquist out to dry early in his first career start by getting back-to-back penalties to start the first. Edquist, a freshman from Lakeville, Minn., held his own on the first penalty, but Nick Halloran made BC (3-2-0) pay by the second. He took in a rebound off a Casey Fitzgerald shorthanded attempt, going down the near boards to launch a wrister from the faceoff circle past Edquist’s left shoulder.

But the Eagles—and White—responded immediately. Earning a penalty of their own from a Cole Josefchak interference call, BC bombarded CC goaltender Alex Leclerc. Ryan Fitzgerald set up White’s goal by sending him a pass off the boards. White went low on Leclerc’s right pad, knotting the game up at one.

“He gets one, and he feels good about himself,” York said of his superstar, who had only notched one goal through his first four games after leading the team last season.

On their second power play of the game, the Eagles came out of the gate sluggish, unable to complete crisp passes. The momentum changed when Casey Fitzgerald—BC’s top offensive blue liner—sniped the puck from deep in the left circle to give them a 2-1 lead into the locker room. York believes that the early season yips were an aberration for the Eagles, and that scoring the first two will give the team confidence on special teams moving forward.

“It’s like in baseball, when you go 0-for the doubleheader, you come back the next day and get a couple of big hits,” York said. “Once you get one really good opportunity, it leads to more opportunities.”

By the second period, the Eagles took off on the offensive. With his family in from Tampere, Finland, Jesper Mattila notched his first collegiate goal. Initially, it appeared that Mattila was attempting to get a quick deflection off Leclerc or force a save that would lead to an offensive-zone faceoff. Instead, he got a chance to celebrate. Immediately following the goal, Mattila jumped into the arms of fellow freshmen Mike Booth and Zach Walker, causing all three to fall to the ice.

But like a Broadway diva, White stole the show yet again with his otherworldly ability.

Scott Savage sparked White’s second goal by attempting a clear. When Ben Israel whiffed on the deflection, White used his NHL-caliber speed to outskate everyone down the near boards. He went top shelf on Leclerc, forcing the goaltender to depart for backup Derek Shatzer.

Dominant play on the penalty kill helped lead to a BC victory as well, particularly from defensemen Casey Fitzgerald and Michael Kim. On one play, Halloran and Branden Makara chased down Kim on a 2-on-1, with Fitzgerald trailing far behind. Halloran aimed for a shot, but Kim jammed his body in between Edquist and the offensive duo for the Tigers enough to make him dish it to Makara. That gave Fitzgerald enough time to shove Makara out of Edquist’s way, and send the puck down the ice. The play ultimately led to the penalty that created Fitzgerald’s goal. In total, Fitzgerald and Kim helped the Eagles stop Colorado College on 8-of-9 power plays.

“Mike Kim came in halfway for us last year so he’s technically still a freshman,” York said, “and Casey Fitzgerald is just an outstanding defenseman.”

Of course, York would have preferred if his young Eagles squad hadn’t given the Tigers that many chances on the power play. Nine penalties, one of which was a game misconduct, are a product of adjusting to new NHL-style rules that college teams must now abide by. The Eagles are also struggling through the loss of Julius Mattila, whose upper-body injury requires surgery and will sideline him likely until January.

For now, the Eagles are just grateful to be home, at long last. And, thanks to White and the return of the power play, they’re even happier to have one more thing checked off their to-do list.