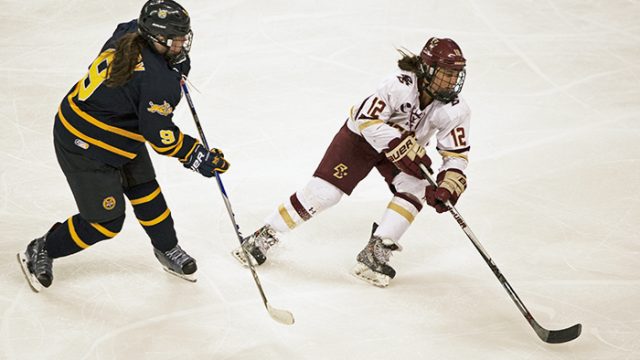 Boston College women’s hockey has had a rough go of it this season.

Well, rough in the context of the Eagles, who went on an incredible 40-1 run last season. For other teams, a 3-2-2 record is just a slow start. It’s been a rebuilding year for the Eagles, and the frequent alterations of lines and pairings by BC’s coaches attest to that. But after a 4-1 win against Quinnipiac University, it appears that the Eagles are ready to take on the rest of the season with a vengeance.

The first game in the home-and-home series against the Bobcats (5-2-1) ended in a scoreless tie, and the stalemate continued into the first period at High Point Solutions Arena. The clash picked up in the second, when a tripping penalty for Abby Cleary handed BC (4-2-2, 3-1-0 Hockey East) its second power play of the day. The Eagles themselves had already gone on the penalty kill twice, but a collaborative effort between the offense and defense put them on the board. With Caitrin Lonergan acting as the fourth forward on the power play, Andie Anastos helped her get the puck within scoring range. Lonergan then passed it off to Toni Ann Miano, who slammed it into the goal, breaking the scoring dry spell for the two teams.

It didn’t take too long for the Bobcats to respond. After a hooking penalty on Anastos, it was Quinnipiac’s turn for the power play. Just a minute after the Eagles put a goal on the board, the Bobcats evened it up when Katie Burt couldn’t get her hands on a hard shot from the blue line by Taryn Baumgardt.

Toward the end of the period, the crowd watched as the old Makenna Newkirk returned. After experimenting at center for most of the season so far, Newkirk slid back into her slot at right wing following her performance in the role during the game prior. The move paid off during yet another power play when Grace Bizal and Lonergan moved the puck up the ice and left Newkirk with it at the circle. She took it from there, tricking goalie Sydney Rossman to put it in the net. Minutes later, the Eagles headed out to the locker room with a 2-1 lead.

Nearly halfway into the third period, BC came roaring back at an unexpected time. After going on two successful penalty kills, the Eagles were faced with one more after Anastos was sent to the box for tripping. This time, they exceeded expectations. Lonergan launched a backhanded shot at Rossman for another goal, tallying a third point in the game for the freshman.

BC received an additional goal from its first line only a few minutes later. Kenzie Kent notched her first of the season off of a pass from Anastos, who got the puck from a speedy Haley McLean. Burt staved off a few more shots from the Bobcats, and the game was over.

A victory against an ECAC team, particularly one that went 30-3-5 last season, predicts a climb back to the top for the Eagles. BC may have seemed shaky in its first few games, but it has propelled itself back into the big leagues with this win. Opponents, take note. The Eagles are back.