A year ago Friday, Boston College men’s hockey was seven games into its 2019-20 season,  gearing up for what would be a weekend sweep against Hockey East opponent UConn. BC women’s hockey was sitting undefeated on the season having just defeated Providence at home.

This year, both teams have yet to take to the ice against a single opponent. But that’s about to change: Hockey East announced that Nov. 20 will be the start date for this winter’s season in the form of a hype video posted on the conference’s Twitter account on Friday.

The account had alluded to the video earlier in the day, after putting out a series of cryptic tweets consisting solely of emojis in the two days prior to the announcement.

Not included in this afternoon’s video announcement, however, was a full regular-season schedule for the teams in the conference. BC men’s hockey will play opening night against an unknown team, per a graphic from the team’s Twitter.

After eight months off the ice, the Eagles are more than ready to return to competition. BC men’s hockey is currently ranked No. 2 nationwide per the USA Hockey preseason poll while the women are just shy of the top 10 list, receiving six votes.

The conference has yet to release each team’s schedules, but the timing of the games may be affected by a recent stay-at-home advisory issued by Massachusetts Governor Charlie Baker.

As of Friday, certain businesses and activities within the state must close by 9:30 p.m., and Baker has instructed individuals to be home by 10 p.m. in order to combat the growing number of COVID-19 cases within Massachusetts. While these new guidelines will only affect teams that play in Massachusetts, half of the women’s league and more than half of the men’s league are schools located in the state. 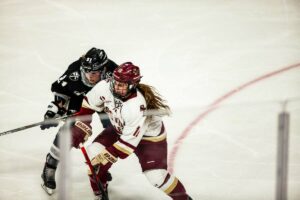